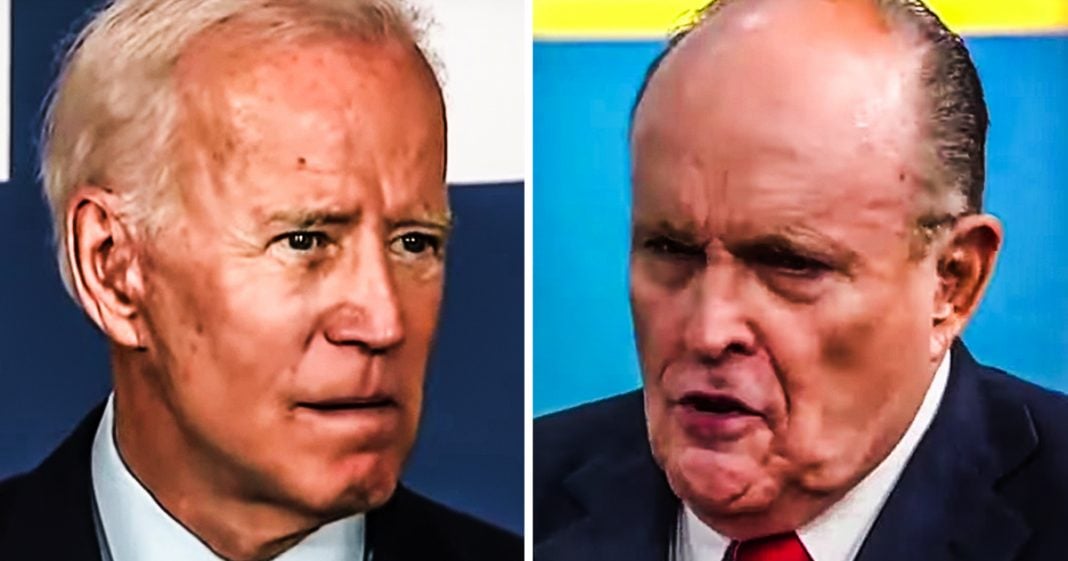 The Biden campaign is not happy that TV networks are booking Rudy Giuliani for appearances to spread his propaganda about Hunter and Joe Biden, and they have sent letters to the networks demanding that they immediately stop booking Giuliani. While Giuliani is certainly lying about what happened, Biden’s crew may have overstepped their bounds by making this demand, as Ring of Fire’s Farron Cousins explains.

*This transcript was generated by a third-party transcription software company, so please excuse any typos.
Joe Biden and his campaign managers are not happy about the fact that this Hunter Biden, uh Ukraine story is really starting to get some attention. You know, now that the president’s facing an impeachment inquiry for asking Ukraine to investigate this, and Biden’s campaign has now sent a letter to the major news outlets here in the United States demanding, not asking, not requesting, demanding that they stop booking Rudy Giuliani on their programs. Here is a little snippet from the letter a, we’re writing today with grave concern that you continue to book Rudy Giuliani on your air to spread false debunk conspiracy theories on behalf of Donald Trump. Now, to that end, let me go ahead and say that yes, this whole Hunter Biden did something illegal, Joe Biden did something illegal. That story has in fact been debunked. So even if they were to investigate it, you’re not gonna find anything because it was already investigated. Much like the fact that the state department’s still a looking at Hillary Clinton’s emails after three and a half years. I mean, sure, if you want to waste your time, go for it. But there’s no, they’re there because they’ve all been investigated already and nothing turned up. Letter continues. While you often fact check his statements in real time during your discussions that is no longer enough. By giving him your air time, you are allowing him to introduce increasingly unhinged, unfounded and desperate lies into the national conversation. Uh, this letters from top aides, Anita Dunn and Kate Bedingfield, but it continues. Here’s the demand we write to demand that in service to the facts. You no longer book Rudy Giuliani a surrogate for Donald Trump who has demonstrated that he will knowingly and willingly lie in order to advance his own narrative. Now, here’s the problem I have with this. I both agree and disagree with what they’re doing. Yes, it’s true. Rudy Giuliani, anytime you put them on television, he’s going to lie. We have seen that over the last few years. The man simply cannot tell the truth and therefore, yes, he should be pulled from the airwaves, but it’s not just his history of lying that’s pissing off the Biden campaign. They’re mad that he’s raising the Hunter Biden thing. If he wasn’t out there talking about that, they’d have no problem with it. And that’s what I have a problem with. You only don’t like this man spreading misinformation because it hurts your candidate and that’s crap. That’s absolute utter crap. You either want dishonest people off the air altogether or you don’t. You don’t only want dishonest people off the air because they said a thing that makes your person look bad. That’s not how this works. You can’t only be mad that they’re lying about your person, but ignore or forgive of the other lies they’ve ever spread. Nope, not good enough. Second of all, and this is probably the bigger one, everybody remember a couple of weeks ago when a Bernie Sanders got a little perturbed because the Washington post ran 16 negative stories about him in 16 hours, and he mentioned the fact that, yeah, obviously, I mean, I criticized Jeff Bezos a lot. Bezos owns the Washington post. Go figure corporate media attacking the guy who’s attacking the corporations. Oh, he took all kinds of hell for that. They compared him. They said he was just like Donald Trump with his attacks on the media. Joe Biden’s campaign literally demanded that the media bow down to their request. right? I want everybody to take a second and let that sink in for a second. Joe Biden’s campaign demanded that the corporate media bow down to their request. They demanded, they use that word demand. We demand you stop booking Rudy Giuliani and yet Bernie caught all kinds of hell for his statement accurately that the media is owned by corporations and corporations have an agenda. That’s true. and he got attacked for hating the media as much as Donald Trump. And here we have the Biden campaign demanding that the media do whatever the hell they tell them to do. And not a peep, not one friggin peep from those same assholes who criticized Bernie for what he did.