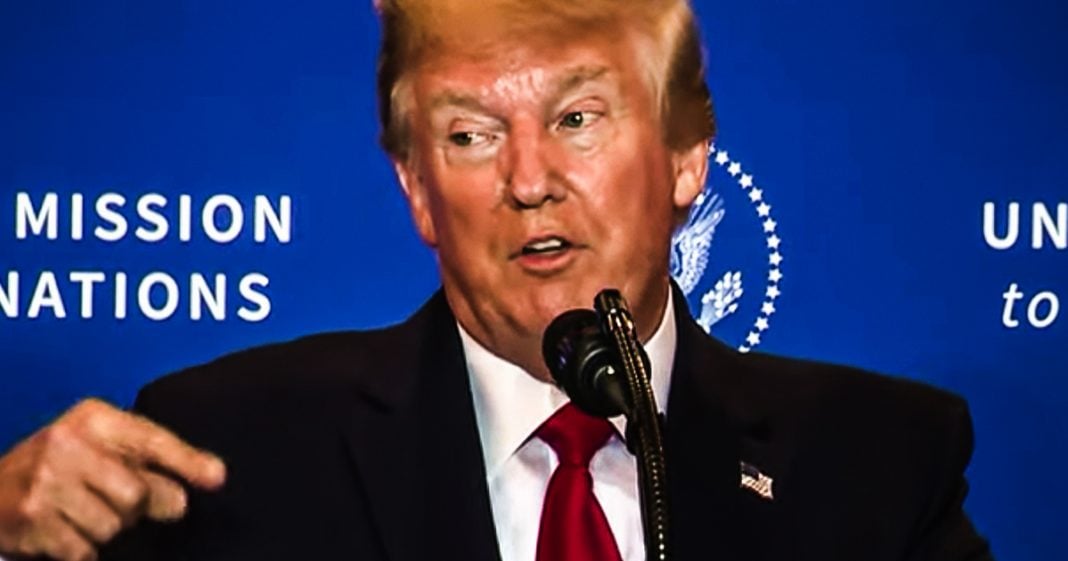 No more bills from the Democratic Party are going to become a reality, according to the President, because they want to “waste” all of their time on impeachment. This is how Trump wants to frame the issue, and it could resonate with some American voters. But the truth is that Democrats are capable of both legislating and investigating, and the public will ultimately come to know who is crippling the government. Ring of Fire’s Farron Cousins discusses this.

*This transcript was generated by a third-party transcription software company, so please excuse any typos.
So Donald Trump officially has his impeachment plan ready to go and he and Republicans rolled it out earlier this week and here it is. We’re not going to do a thing. We will not work with Democrats in any way on any piece of legislation that they put forward that they propose or that they write. As long as this impeachment inquiry is happening, we won’t do anything. We are officially going to paralyze the federal government because we are mad at the Democrats. Okay, here’s what’s happened. You had a Senate Republican staffer who told the press that, yes, as of this moment, any talk of a gun bill is dead. Any talk of infrastructure spending is dead. Stephanie Grisham, white house press secretary also echoed these sentiments earlier this week when she said yes, the Democrats are so focused on impeachment and just hating the president in general that no legislation will ever come about and we will not work with them whatsoever. House and Senate Republicans echo those sentiments as well, and here’s why they’re going to do this because they want the public to think that house and Senate Democrats can only work on one thing at a time. That’s all they’re capable of doing. When in reality, even with an impeachment inquiry, which is pretty much going to stay in committee for now, those Democrats in that committee can still do other things and they hire outside investigators, outside lawyers to do the bulk of the work. I mean, that’s typically actually how these committees work. You have to hire the outside people to come in and do it because believe it or not, folks, they do still have a job and they are still writing legislation and they are still proposing legislation and they’re still holding votes. But Republicans don’t want you to know that. They want you to think that the upcoming crippling of the United States federal government is all because Democrats are hyperfocused on impeachment and they refuse to do anything else. So to that, I have to ask, then what the hell has been going on for the last two and a half years? Right, because we weren’t impeaching all that time and yet nothing got accomplished. Now. I know. I know Democrats put forward bills. I know since January this year, house has been passing them, sending them over to the Senate that’s controlled by Republicans and then they die. So stop acting like you were suddenly about to start working with Democrats on anything, whether it be gun legislation or infrastructure or a green new deal or even drug prices. You weren’t going to do any of it Republicans because Mitch McConnell wasn’t going to let you We tried hundred percent. Absolutely tried sending bill after bill after bill over to the Senate where Mitch McConnell effectively killed it, called himself the grim Reaper of progressive legislation. So yeah, there is a paralysis in the federal government, but it’s not due to the fact that the Democrats decided to focus on impeachment a little bit. It’s because Mitch McConnell is a walking, talking piece of crap. That’s the problem. It’s Mitch McConnell. It’s the Republicans, but a dang sure isn’t the Democrats, and it’s certainly isn’t because of impeachment Democrats, unlike Republicans, are capable of focusing on more than one thing at a time. They can do all parts of their job, not just some parts of it or like Republicans, no parts of it, but this is going to be the strategy going forward for the Republicans and for the white house. No legislation will get passed, no bills where it gets signed, and when the 2020 election rolls around, they’re going to blame it all on the democratic party.