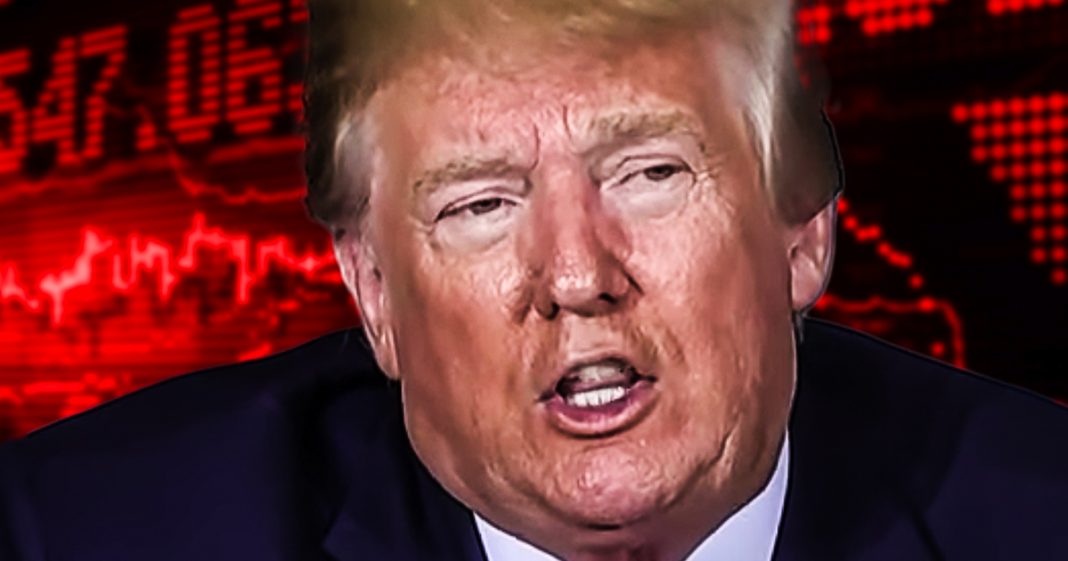 Donald Trump has repeatedly claimed that the stock market would tank if he is impeached, and with the official inquiry being announced this week, he doubled down on his claims. The truth is that the stock market could, in fact, take a hit from the inquiry, but certainly not to the degree that it does when Trump tweets out something ridiculous. Ring of Fire’s Farron Cousins discusses this.

*This transcript was generated by a third-party transcription software company, so please excuse any typos.
For months now, long before Nancy pillows, she finally said, all right, fine, I’ll give you your damn impeachment inquiry. Trump has been telling us that if he is impeached, the stock markets are absolutely going to crash. Entire economic system that he apparently built from scratch will come crashing down. Everyone will lose. All their money will all be destitute and it’s all because those pesky Democrats open an impeachment inquiry. And I remember he was saying this long before Pelosi ever caved on it long before the Ukraine phone call thing came out and this was back during the Mueller months, but he said it again this week and he said it with a little bit more urgency. Here’s what the president tweeted out. Uh, this was on Wednesday. If they actually did this, the markets would crash. Do you think it was luck that got us to the best stock market and economy in our history? It wasn’t. He wants you to think it was him, but also with that it wasn’t. Here’s the thing, Donald. Yeah. Impeachment does have the potential to cause some dips in the stock market. Lots of things cause dips in the stock market. A bad state of the union address by a sitting president causes dips in the market the next day. elections, cause dips in markets no matter which party takes over That’s what happens. That’s because the stock market is stupid. It is a made up thing that we created that is as temperamental as a three year old whose over tired, didn’t get a snack and doesn’t want to watch whatever cartoon you put on. That’s what the stock market is. It’s an angry toddler throwing a temper tantrum, volatile, cranky, and not very bright. But here’s the thing. Tuesday stock market took a little bit of a dip and by little bit of a dip. I mean 0.5% that is a tiny, tiny dip and then by Wednesday morning it had rebounded back to the levels it was before. It took the dip and Republicans, including Fox news are out there trying to tell us that after Pelosi announced the impeachment inquiry, stock market dip, 0.5% which is a sign of all hell breaking loose. It’s Armageddon, it’s Ragnarrock. It’s all the horrible things our ancestors ever warned us about when we angered the gods except that by the next morning everything was cool again. And then later that same afternoon after everything was cool, Trump makes that tweet like, Oh, we’re going to die. Stock market’s going to crash if you impeach me. Um, does he realize that stockbrokers and wall street banks actually have what they call and we’ve discussed this, the COFI index where they’ve actually tracked the fact that the more Trump tweets, the worse the market does. So no impeaching you is not going to tank the stock market. If anything, it’s going to create a longer term rebound from the market, not having to respond to your idiotic tweets about trade wars steel and tariffs. Because whenever he tweets out one of those words, the market tanks and it tanks by a lot more than 0.5%. He’s trying to scare people into thinking that the Democrats are going to ruin them financially. But the truth is, the president’s been doing a very good job of that just through his Twitter feed for the last two and a half years.