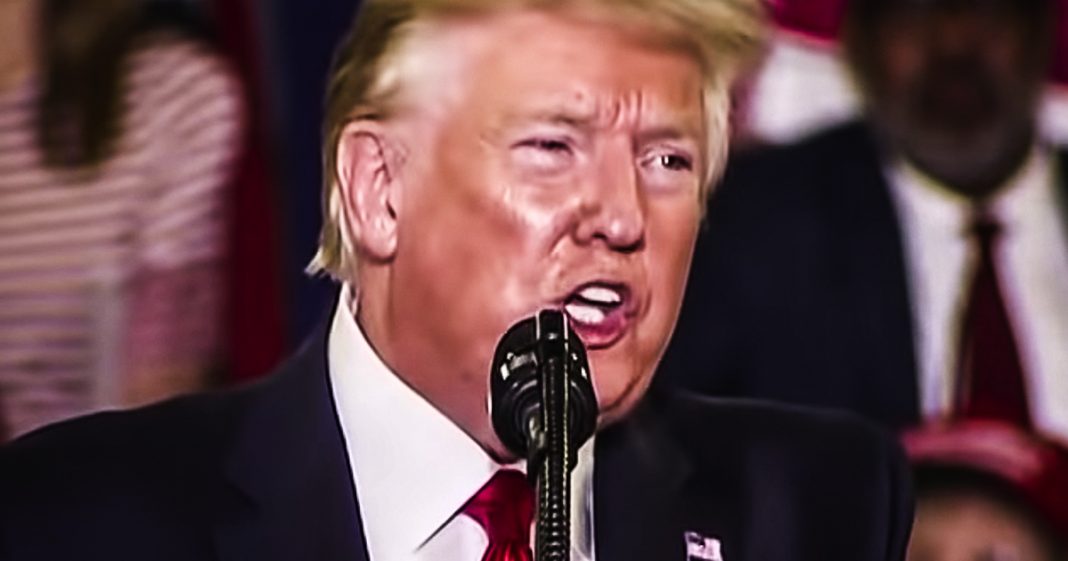 Donald Trump’s trade war is having a nasty impact on the people who propelled him into office, and the trade war is showing absolutely no signs of stopping. But most of these voters understand who is to blame and what is really happening to them, in spite of the fancy tweets from the President about everything being great. Ring of Fire’s Farron Cousins explains what’s happening.

*This transcript was generated by a third-party transcription software company, so please excuse any typos.
Donald Trump does have some very serious problems as we inch closer and closer to the 2020 presidential election. But the biggest problem facing this president is his own trade war. And that, as I’ve repeatedly said, is something that only the president owns. The Republicans in Congress didn’t vote on this. Democrats didn’t vote on this. Some Republicans say they do support it. Yeah, yeah, I get that. But Trump made these decisions himself. He did this, he put it in place, and all the damage that it’s causing, which is a lot. It all rests with him. Recently, Huffington post actually, uh, put together a great report on how these trade Wars are affecting voters in States like Pennsylvania, Michigan, and Wisconsin, three States that are likely going to be pivotal in the 2020 presidential election. Three States that helped hand Trump the presidency in 2016 but it’s unlikely he can repeat those successes because again, of his trade war. And here’s what we’re looking at right now. Wisconsin in particular, this piece focuses a lot on Wisconsin, uh, for obvious reasons, huge, uh, swing state right now. But in Wisconsin, you have farmers who are absolutely being obliterated. They’re expected to lose 37,000 manufacturing jobs in Wisconsin alone in addition to thousands of manufacturing jobs that have already been lost in the state of Pennsylvania. All of those job losses can be traced directly back to Donald Trump’s trade Wars. The farming bankruptcies trace back to Donald Trump’s trade Wars, farmers going out of business, not making enough to get by anymore. That’s Trump’s trade Wars. But here’s the thing. We know this, we, we’ve talked about this. The question has always been, do the people understand this? Do they know that he’s the one who did this and according to this piece that people they talk to, they know and that’s why Trump is now in trouble. It’s not just that he did it because we’ve seen his spin. He says, no, China’s paying the tariffs. You guys are fine. Oh, I’m going to give tens of billions of dollars in bailouts to farmers. They’re going to be fine. Yeah, but the people who are actually living the experience, they’re telling us that everything is not fine. In fact, here’s a, here’s some of the things. One of the farmers man by the name of Randy Jasper, uh, when asked about the trade war and the impacts of it and whether or not this actually does resonate with other farmers that he knows, he said, everybody knows it’s out there in the real world. And see that is a bit of a difference, right? Trump doesn’t live in the real world. Even when he did tactically live in the real world, he didn’t live in the real world, right? He lived in his little penthouse bubble in New York city. Now he lives in his little bubble inside the white house. He doesn’t know what the rest of us go through on a daily basis, but these folks do and they know who’s screwing it up and they know what’s happening here. Jasper went on to say, it’s becoming clear to them that putting a failed real estate tycoon in charge of the international economy wasn’t such a great idea. And that might be one of the best quotes I think I’ve ever read here on ring of fire. But he goes on, he’s talks about the fact that yeah, they’re getting the bailout, but the soybeans, because he’s a soybean farmer, uh, would sell for $3 a bushel, but he’s not getting that anymore because of the trade war. So the government stepped in and they’re giving them a dollar per bushel to which Jasper said, I’m no genius, but if you lose three and you get one back, that’s a net loss of two. And he is obviously a hundred percent correct about that. They were getting $3 per. Now they’re getting $1 per as part of Trump’s bail out and they’re still losing tons of money. Cause even at the $3, it was still tough to get by. But the most important takeaway from this entire piece was that they know who to blame. The question is, are they going to carry that blame with them for the next 13 months and vote Trump out of office or is some other kind of single issue, possibly pro choice or pro life issue gonna make them realize that, you know what, I don’t care about my own livelihood. I just want to take away a woman’s right to choose, and I bring that issue up, particularly because, yeah, you got a lot of single issue voters in those areas, and typically that single issue happens to be abortion, but if they start to realize that, you know what, maybe I got to start looking out for my own livelihood and stop taking away the rights of others, then maybe just maybe Trump could lose these crucial States in 2020.