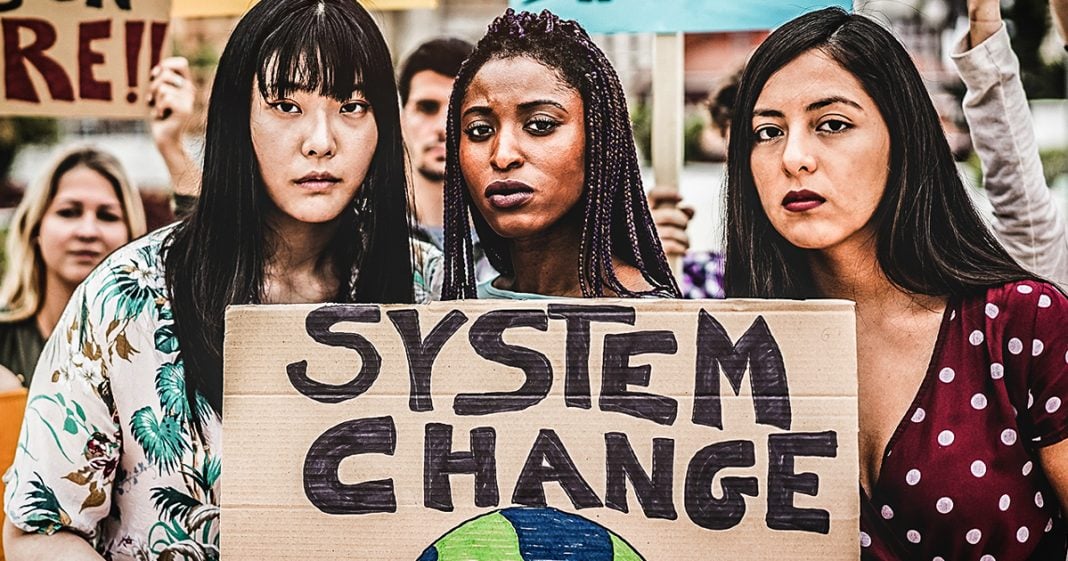 Protestors shut down parts of Washington, D.C. earlier this week to draw attention to the growing threat of climate change, and Republican lawmakers in Washington aren’t happy about it. One Republican, Jim Banks from Indiana, has now introduced legislation that would force protestors to cover the cost of police overtime for having to be out there to protect and monitor the protestors. Ring of Fire’s Farron Cousins explains how this would be an unconstitutional move from the Republicans.

*This transcript was generated by a third-party transcription software company, so please excuse any typos.
Republican representative Jim Banks from the state of Indiana serving in the US house of representatives is decided that he’s sick and tired of these damn protesters. I mean earlier this week in Washington DC, you had climate protesters who blocked off a lot of streets. You know, traffic was all hay wire people couldn’t get through because of the protestors. It show representative Banks has had enough and in his anger at these protesters, he decided to out crazy the rest of the Republican party and he is now saying he’s going to put forward legislation that would force protesters to pay the overtime costs of the police officers who have to go out there and monitor these protests, make sure nobody gets out of line and arrest the people who do get out of line. He wants the protestors specifically any of those who get arrested during a protest, you will now be paying the overtime of those police officers. Yeah. You can’t do that. And I’m going to explain why in a minute, but first I have to explain why representative Banks thinks protestors should be on the hook for those costs. Here’s what he said. “Washington DC collects over 4 billion in federal funding. Who is your taxpayers shouldn’t be on the hook for illegal protests. It is a violation of their first amendment rights.” Right now, my first Amendment’s a little rusty, but I don’t know that I’ve ever, um, ever seen anything mentioned in the first amendment of the US constitution that says that it is a violation of your first amendment rights. If your tax dollars go to play a police officer’s overtime. If that officer had to work extra hours because somebody was protesting and then got arrested. Now, if anybody finds that in the first amendment, please do send it to me. All right. It’s been a while since I’ve read it, you know, a couple of days. So maybe it’s changed since then. Maybe I read an abridged version, I don’t know. But what I knew now is against the first amendment of the US constitution, Mr. Banks, is that you can’t infringe on someone’s right to peaceably assemble illegal protests. According to the first amendment. There’s no such thing as an illegal protest. It is a right given to every citizen of the United States under that first amendment that is in the constitution, not we shall not pay police officers over time if a protest or does a bad thing. Yeah. If somebody does a bad thing, they do a bad thing. That doesn’t mean you get to limit the rights of a protester. You cannot put an additional fee on somebody who was protesting. That would be unconstitutional, you idiot. But this has come to sum up the entirety of the Republican party representative Bank’s legislation may not even see the light of day and if it does, it sure as heck isn’t going to pass the house of representatives, but this is the level of extreme that the Republican party has reached trying to violate the first amendment. By saying that if we don’t do it, it’s a violation of the first amendment. I don’t know if that’s just a new kind of doublespeak that we’re not used to hearing or if perhaps maybe there is just an insane level of stupidity running in the veins of every elected Republican in this country. I’m inclined to think that it’s the ladder.