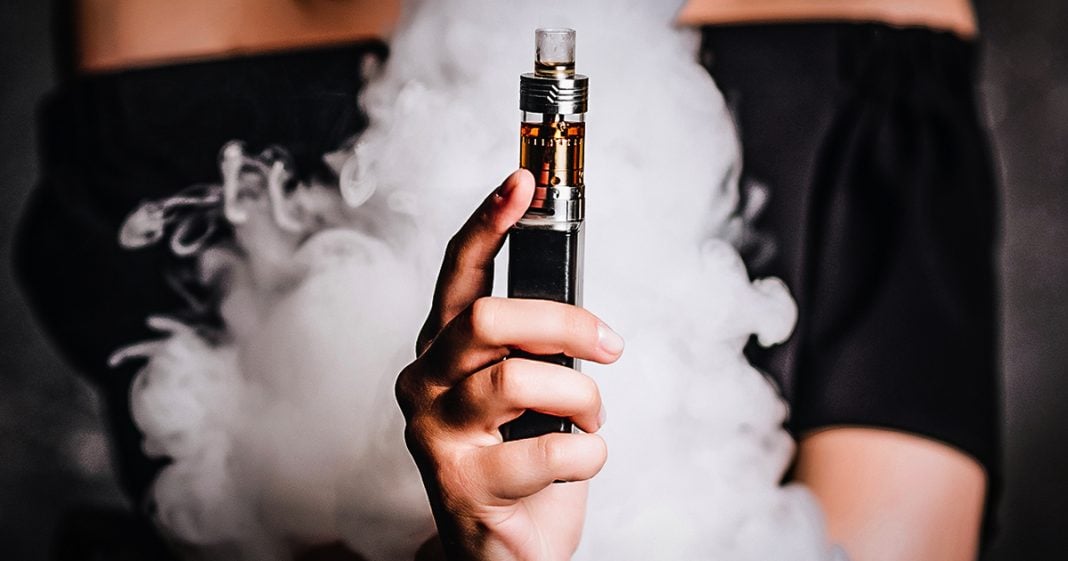 Republican allies of the President are sounding the alarm over his flavored vaping ban, claiming that this could be the final straw for a lot of conservative-leaning voters. Imagine this issue being the one that finally turned someone off of Trump? Nevertheless, Republicans are afraid, but for the wrong reasons. Ring of Fire’s Farron Cousins discusses this.

*This transcript was generated by a third-party transcription software company, so please excuse any typos.
You know, there’s lots of reasons to not vote for Donald Trump in 2020 whether you’re a farmer hit by the trade war, whether you’re a manufacturing worker laid off because of the trade war, maybe you’re one of those people just like me that was promised by Republicans a 4 to $9,000 a year tax cut only to actually see your taxes go up. Lots of reasons out there. Oh and let’s not forget obviously all the crimes and the nepotism and you know all of that, the debt exploding, the deficit exploding, spending millions of dollars of our tax dollars at your own company so you can put it back in your pocket. Yeah, lots of reasons to not vote for Donald Trump, but none of those, our concerns to Republican allies of the president, but they are warning him right now that there is one issue. There is one issue, one thing he has done that is likely to piss off enough voters to cost him the 2020 election and that one thing is the proposed ban on flavored E cigarettes. Republican friends of the president, including by the way, industry lobbyists for e-cigarette companies are warning the president that there are so many vapers in this country, particularly in the areas that basically gave Trump the electoral vantage. If you ban it, boy, they’re not going to vote for you ever again. And here, according to Axios, is actually how this lobbyist and these allies laid out to the president himself. How this vaping ban is going to effect Trump’s 2020 chances. They said, first you have these voters, they start out as Trump voters. They wouldn’t vape anymore if they couldn’t get the flavors. They are single issue voters around vaping rights. The eventual democratic nominee would be more vape friendly than step five. Boom, Democrats, we win because of the vapors. Now I think Trump’s vaping ban the proposed vaping ban is stupid. Okay. I 100% think it’s stupid. Yes, a couple of people have died and a ton of people, hundreds of them got sick, but it all happened like that instantaneously, which to me suggests that perhaps there were a couple of bad batches of vape juice out there and that’s why it needs better, stricter regulations. And yes, we do know the vaping companies make these fruity little candy flavors to attract children. We know that tobacco companies do the exact same thing. There’s no question about that, but to outright ban them, that’s not the right course of action. You them in a store, first of all, you don’t let them advertise these flavors. You put them in a store where children have no possibility of ever even seeing them, and you’re going to help cut down on the problem there. But overall, the biggest issue is that you’ve got to have better regulation on the vapes, on the e-cigarettes. That’s what’s been missing from this whole thing. And to be honest, that’s what we’ve been talking about for years here. And whenever we suggest that the vapors get pissed off and come at us saying, we’re in the pocket of big tobacco. No, technically you are because you do realize who’s buying up most of these vape companies, right? It’s big tobacco. Nonetheless. Look, this is not the issue that’s going to cost Donald Trump 2020 I mean, maybe he’s going to lose a few people because of the vaping ban, but could you imagine as a voter yourself being like that being the hill you’re going to die on vaping like, Oh, well I know he committed the treason and with the Ukraine, you know, likely committed the treason with the, with Russia, all of the obstruction of justice, all the emoluments clause violations, all of the horrible policies. I’m okay with those. Oh, he banned vaping. See yeah, throwing this MAGA hat away. I hope to God there’s nobody in the country who’s like that and trust me, I don’t want anybody to ever vote for Trump, but I don’t ever want that to be the reason. You’re not going to vote for Trump, if that makes any sense, because that’s a really stupid Hill to die on. Trump has done a lot of horrible things, so, so let’s maybe focus on those. This vaping ban, yes, it is stupid, but if you’re going to let that be the straw that breaks the camel’s back, then what does that say about you.