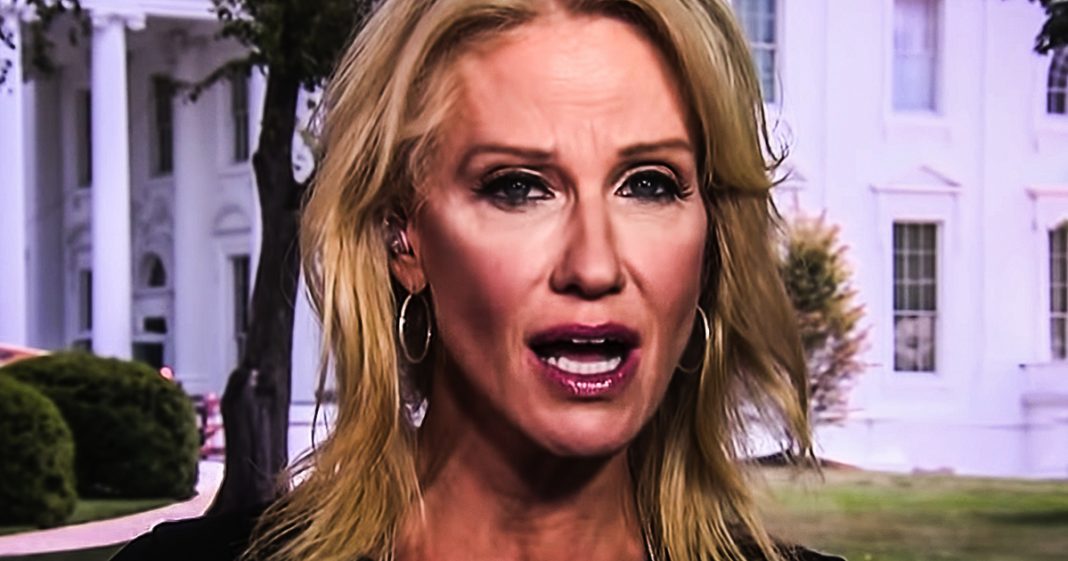 During a GOP dinner in Ohio last weekend, Kellyanne Conway went into a deranged attack on Democrats, saying that they are the ones who are bigoted and hate women. Conway needs to take a good look in the mirror, because the people in that room, including herself, fit that description perfectly. Ring of Fire’s Farron Cousins discusses this.

*This transcript was generated by a third-party transcription software company, so please excuse any typos.
This past weekend, Kellyanne Conway headed up to Ohio where she gave a little speech, if you can call it that, uh, to a dinner of Ohio Republicans, your Republican officials, Republican donors, everybody’s at this dinner. And Kellyanne Conway shows up to get some grub and also of course to, uh, you know, call Democrats sexist bigots. Here’s exactly what Kellyanne Conway had to say at this little dinner gathering in Ohio. Their top three candidates are white career politicians in their sixties and seventies, which I have nothing against, except they certainly do… why the… Anyway, I don’t know why the heck the Democratic Party electorate is so racist and sexist. I can’t figure it out. again. What? The democratic electorate, which means Democratic voters were, were apparently both racist and sexist according to Kellyanne Conway. And that’s, that’s really news to me. I did not know this. I am shocked to find out that way. Not The GOP are in fact the horrible human beings on this planet. You know, I didn’t know that by supporting black lives matter, that actually made us the bigots. Instead of saying, Oh, if black people get shot by police, that’s totally their fault. Apparently that’s the correct position to take. Oh, I didn’t know Kellyanne, that uh, telling a woman she has the right to decide what to do with her body was sexist. Whereas like on your side, telling them what they’re legally allowed to do and not giving them any choice. That’s the pro woman stance to take. God, I feel like such a fool. Kellyann. Thank you. Thank you so much for opening my eyes to the truth of the fact that you are a frickin moron. You absolutely are. I mean what kind of human being, and the answers Kellyanne Conway before I get to the end of it, is capable of just going out there, making crap up, saying random things. I just read you the exact quote, not of it, not all of it’s even a complete sentence, but she said it, that crap came flying out of our mouth as people were sitting there trying to eat and she thinks walking away from there, I got him, got those Democrats. I showed them, I said they were racist and sexist, but really it’s us. It’s the Republicans who are doing this is nuts. And Kellyanne Conway is nuts. And even though her husband doesn’t like Donald Trump, just like the rest of us, um, he’s also pretty nuts too because he doesn’t disagree with most of the president’s policies. And He loves the fact that Trump is packing the judiciary with a bunch of right wing political hacks. There is no redeeming qualities or factors with any member of the Conway family or the Trump family. But for Kellyanne, and to go up there and blatantly lie to these morons in that Republican dinner and say that, oh no, it’s the Democrats who are the bigots Democrats who are sexists now let’s get back to telling women how to control their own bodies. That’s what’s happening here folks. And honestly, most of it probably is just gaslighting. She says these things just to Piss us off and make us think that we own the left are going insane having to defend them. So possibly this is my fault for falling for it, for getting worked up over it. But at the same time, I’m not going to let this woman continue to spew these nonsensical lies and act like it’s okay that she is out there in her position of power, clearly also violating the hatch act, by the way, spreading false statements about what the Democratic Party and those of us on the left actually stand for. She wants to find the racist. You want to find the bigots? You want to find the sexist Kellyanne, go to your nearest mirror and take a good long look.