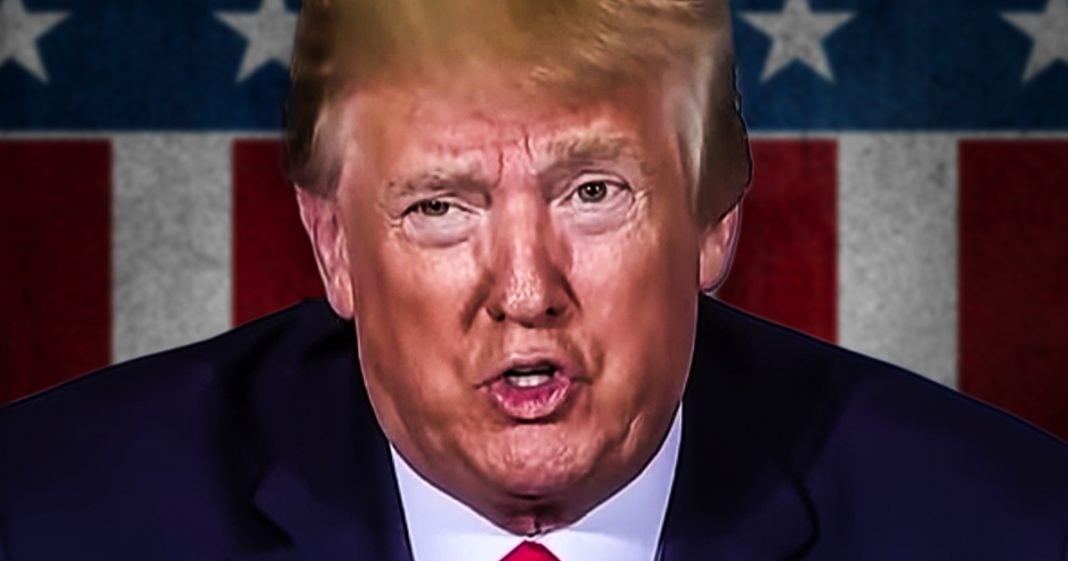 Donald Trump thinks he can sue his way out of anything, and the new impeachment inquiry is no exception. Trump has been talking with his aides about the possibility of legal action against the Democrats to stop the inquiry, but there’s nothing the president can legally do to stop this from happening. Ring of Fire’s Farron Cousins explains.

*This transcript was generated by a third-party transcription software company, so please excuse any typos.
So needless to say, Donald Trump is not happy about the fact that he is facing an impeachment inquiry and he’s also not happy about the fact that reporters obviously are going to keep asking him about it. So yesterday while he was at joint base Andrews leaving New York to head back to Washington DC, reporters asked him about the inquiry in Donald Trump said, quote, it shouldn’t be allowed. There should be a way of stopping. It may be legally through the courts. Now he did not elaborate on what that statement might actually mean legally through the courts to stop this impeachment inquiry. But this just shows you where Donald Trump’s brain is at right now. He doesn’t know what to do. He doesn’t know how to handle this. He’s been away all week dealing with the UN general assembly and now he’s back to DC and things are about to start to get very real for the president here. But the threat of maybe legally stopping this through the courts, it shows you how dumb this man truly is and not necessarily in the sense of he has a low IQ but that he doesn’t know how government works, but that’s what we get as a country when we put in a businessman with zero political experience, zero legal experience and expect him to be able to run the country. That was stupid people. Okay. That was stupid on your part for making this a reality. Trump doesn’t understand the different branches of government. He doesn’t understand the role that these branches play and he doesn’t understand the powers that are assigned to each specific branch and that’s why he thinks, honest to God, he thinks he can stop this through the courts. He doesn’t know any better. He has a child trapped in the body of 110 year old who shouldn’t be in this position to begin with. He doesn’t know what he’s doing. He doesn’t know what he can do and that makes him very dangerous because things are going to get worse. This has already been one hell of a week for the president, possibly one of the worst weeks he’s ever had. Because this isn’t an issue that the American public doesn’t understand. Like the Russia investigation. This isn’t an issue that Republicans have been able to spin in a way that most people think, Oh, maybe it’s not real. Nope. None of that has worked. None of it has worked. The polls supporting impeachment have shifted to a plurality in favor of it in three days, three days ago, majority of people in this country did not support impeachment. Today, four new polls show a plurality, not a majority, cause none of them cross 50% but a plurality of people in this country do support impeachment. Now, it took three days. It took three days for that to change. Trump’s in trouble, and he is going to become far less predictable, far more volatile as he tries to figure out a way to stop this and in his desperation is likely to once again run a foul of US laws.