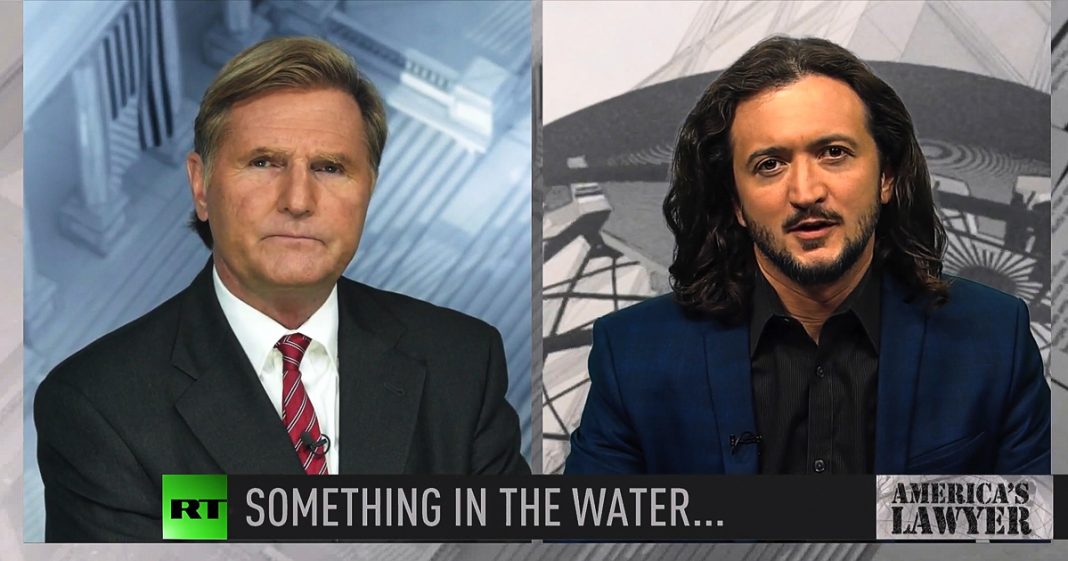 Via America’s Lawyer: Host of RT’s “Redacted Tonight” Lee Camp joins Mike Papantonio to give his take on a recent report by Heliyon that points to over 100,000 cancer cases in the U.S. linked to contaminants found in our drinking water. With Trump’s recent rollback of the Clean Water Rule, why does it seem like public health under this administration has fallen by the wayside?

Mike Papantonio:             A frightening new study released by Heliyon points to contaminants in our tap water contributing to over a hundred thousand cancer cases in the US since 2010. Host of RTs Redacted Tonight, Lee Camp, dear friend of mine is here to break it down for us. Lee, the study authored by Heliyon points to scores of cancer cases that are linked with contaminants in our drinking water. How has the EPA gone about prioritizing to protect our water supply?

Mike Papantonio:             Understand, most of the cases I handle now with big environmental cases actually originated back in the Clinton years.

Mike Papantonio:             So if we’re ever going to get a handle on it, we have to first understand that the regulators that are put in these positions, most of the time they come from silk stocking corporate entities. They may be the silk stocking Covington and Burling firm in Washington, DC but they’re always the big money people who really don’t give a flip about consumers. They care about their bottom line. That’s the way they’ve come up. And when they move into that regulatory position, they, they don’t, they go golfing with everybody they’re supposed to regulate.

Mike Papantonio:             And then they get a job offer from that person they’re supposed to regulate. But who, who do these findings put at risk? As you look at this material, Lee, who is it that’s at biggest risk from these findings?

Lee Camp:                              Well, I mean that’s, that’s truly the sad part is it’s, it’s, you know, the weakest among us, right? Who suffer the, the, the quickest and harshest penalties. It’s, it’s the, you know, infants, it’s the elderly. It’s, it’s a, it’s a kind of similarity to our economic sanctions on other countries. Who gets hit the worst? It’s those who, you know, are not strong enough or don’t have the, exceptional wealth to be able to avoid drinking out of the tap water. You know, now we’re almost getting to a point where the truly wealthy can use bottled water for everything. They, they feed their dogs bottled water.

They, they, they feed their plants coconut water, which is cannibalism, but they, you know, they, were getting nearly to that point and it’s because, you know, they, they, they don’t care. The ruling elite that are making these decisions. The head regulators like you say, are, are in bed with these corporations. And apparently they don’t care that it’s 38% of Americans will be diagnosed with cancer at some point in their lives. And again, the wealthiest have generally the healthcare plans that can help deal with that if they end up in that situation.

And, and speaking about what you were saying about the, the, the corporate interests and everything, and how this has been going on under many presidents for a long time now. You know better than, than anyone that these people you’re going after in these lawsuits, they give to both sides of the aisle. They fund both sides so that they can know whoever gets in that top office is still going to reward them.

Mike Papantonio:             DuPont, they, they, they poisoned the water of 70,000 Americans in the Ohio River Valley with something that every scientist that has looked at says, yes, this causes cancer. And so I, I guess if you think about it, I add to that now, Trump’s wanting to repeal the clean water rule. I mean, what’s his motivation there, Lee? Where does that take Trump to be able to repeal the clean water rule? What happens? Why does a president say, yeah, that’s a good idea?

Lee Camp:                              Well, we do know Trump’s about one person and that’s Trump. So it does bring up the question, what does he care about the clean water rule? Is this, you know, that’s not something he spent his life caring about. But really what it is, is just rewarding his corporate base. He’s basically, the ID of the corporate state has just run wild. You know, it’s, there’s nothing stopping it now. The, the, the curtain has come off and we can see what it looks like and he’s not, as we know, he doesn’t even read these documents.

Do you think the bills that got these regulations and do you think he’s really spending his, you know, 4:00 AM hour reading through these things? No, he’s watching Fox news and tweeting. So who is it that’s doing this? Well, it’s the people he’s putting in place. He has rewarded the corporate totalitarian state by giving them these positions, by giving it to Wheeler, giving it to Scott Pruitt and then those people are approved by our corporate bought Congress. So, you know, he’s basically just said, gloves are off.

Mike Papantonio:             Yeah, right. At least in the past, presidents who’ve done that have been somewhat apologetic when they’ve done the same thing. Trump simply is not apologetic. Thank you for joining me, Lee. I appreciate it.

Mike Papantonio:             I’d like to do this story again because we’re gonna find more and more of these types of stories developing in that, certainly in the next year when Trump maybe may feels like he’s out of time.