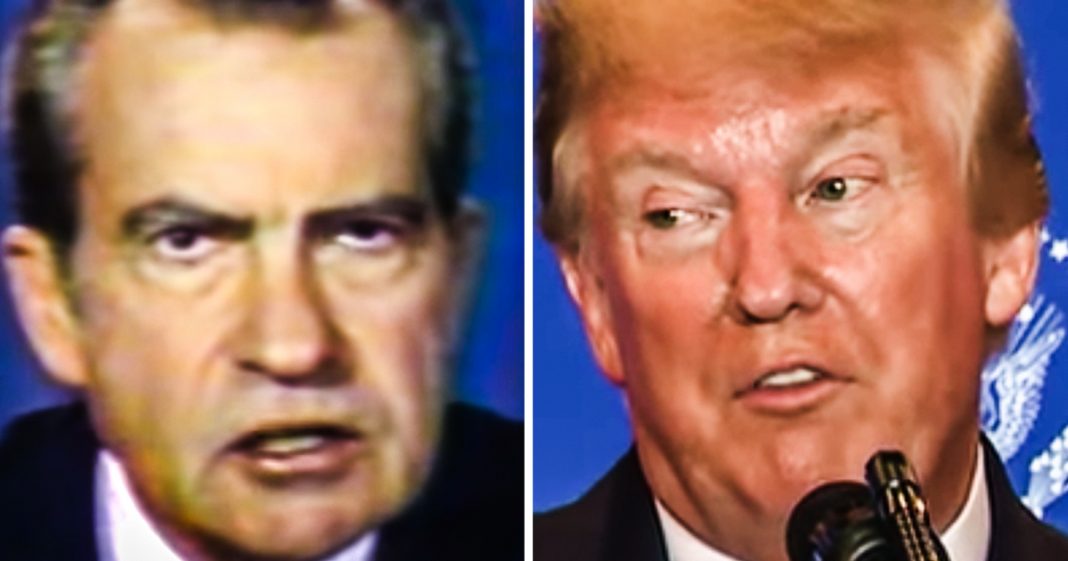 There have been a lot of parallels drawn between Donald Trump and Richard Nixon, for very obvious reasons. But one that continuous gets overlooked is how different the media landscape is today. Nixon had reporters and real journalists working to expose him – Trump has the media running cover for him. Ring of Fire’s Farron Cousins explains the differences between Nixon’s impeachment and Trump’s.

*This transcript was generated by a third-party transcription software company, so please excuse any typos.
You know, a lot of parallels have been drawn between Richard Nixon’s impeachment and Donald Trump’s impeachment. Um, I’ve drawn a couple here too, specifically. The fact that when the impeachment inquiry began into Richard Nixon, majority of the public did not approve of it. But as the weeks wore on, those numbers shifted. Nixon’s approval rating fell because he was viewed favorably by most then he was not. Then suddenly a majority of the public did support the impeachment and then he ended up resigning before everything could, uh, come to a conclusion. Same thing happened with Donald Trump, except his approval rating was about 15 points lower than Nixon’s was at the time. But still in the early days of this impeachment, you know, three days ago a poll showed people didn’t support it. But now, three days later, at least four different polls show that a plurality of people in this country do now support impeachment. So there’s a good parallel except Trump’s, you know, moving it along and it exponentially higher rate than it happened with Nixon. But here’s a very stark difference and this difference could end up saving Donald Trump. And that is that back then when Nixon was being impeached, he was being impeached because journalists, and of course a whistleblower, much like today, uh, helped expose the truth, but it was the journalists at the time, the media back when media actually did its job that helped uncover all of this. And that helped bring down Richard Nixon media was out there exposing Nixon. But today media is out there covering for Donald Trump. And I’m talking of course specifically about Fox news about Breitbart daily wire, daily caller, all of those, any site out there saying this is some kind of deep state conspiracy by a CIA operative inside the white house, probably planted by Obama. They’re providing cover for Donald Trump. This apparatus, this conservative media apparatus did not exist in Nixon’s day. I mean, the phrase conservative media didn’t exist in Nixon’s day. Liberal media didn’t exist. It was just media. It was unbiased. Fair reporters doing reporting, journalists doing journalism that doesn’t exist today to a small degree, I guess. Sure it does, but not the way it did back then. And it’s never going to exist like that again. So instead you have media outlets out there running cover for the president, Fox news wall to wall coverage for the last few days, telling us why all of this is false, why the whistleblower can’t be trusted again, how this is a deep state coup against the president, how everybody’s innocent, the Democrats are just drumming up another witch and so on and so forth. Millions of people watch Fox news every day. Millions folks. Sure it might amount to just one or 2% of the entire us population, but that’s still a lot of people and they’re getting misinformation, disinformation and flat out lies all day long about this issue. Think of it this way. If we had had a Fox news, if we had had online conservative media outlets in Nixon’s day, do you think he would’ve been so quick to resign or do you think he would’ve had that apparatus behind him covering for him, giving him the confidence to think, you know what, maybe I can weather this. Maybe we can all spin this in a way to where I come out of this as the hero, or at very least to where I don’t get removed from office. That’s what Trump is banking on today, and that is why Trump absolutely will not ever resign his office. I saw Beto O’Rourke came out this morning called on the president to resign. Look better. I would love for the president to resign today, but he’s not going to, and to be honest, why would he? He has the entire conservative media apparatus at his back defending him, protecting him, elevating him, and trashing Democrats in the process. He has no reason to resign from office because as it stands right now, that apparatus that’s taken him this far is probably going to be the only reason he survives impeachment.