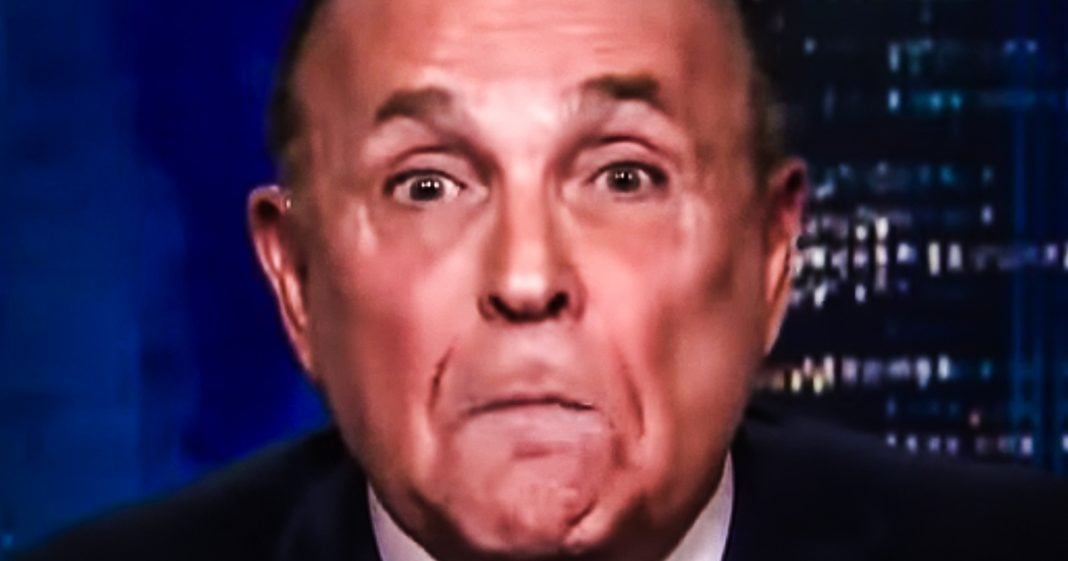 Rudy Giuliani is absolutely one of the dumbest attorneys in the United States. After the release of the whistleblower report, Giuliani tweeted out a screenshot of text messages that he believed would prove the whistleblower was a liar. Instead, they perfectly corroborated the story, leaving Giuliani looking dumber than usual. Ring of Fire’s Farron Cousins discusses this.

*This transcript was generated by a third-party transcription software company, so please excuse any typos.
I have repeatedly said that Rudy Giuliani might be the dumbest lawyer in the United States. And today I stand by that statement more than ever on Thursday evening to promote an upcoming appearance on Laura Ingram’s Fox news program. Rudy Giuliani tweeted out the following, why does this text and date render the hearsay of so called whistleblower useless and not credible? If you get even one reason I might recommend you for law school two and its law review answers later. Watch Laura at 10:00 PM- and as you can see, Rudy Giuliani attached to that tweet, put a screenshot of this text message from Kurt Volker says, mr mayor really enjoyed breakfast this morning as discussed, connecting you here with Andrea Yermack who is very close to president Solinsky I suggest we schedule a call to gather on Monday, maybe 10:00 AM or 11:00 AM Washington time signed, Kurt. There you have it folks. Rudy Giuliani posted the info there. So obviously everything in that whistleblowers complaint is false except of course where, uh, where he mentioned that Rudy Giuliani was sending messages to Kurt Volker and, uh, Andrew Yermack and Giuliani just tweeted it out thinking that it was somehow going to discredit the whistleblower. I’m still trying to wrap my head around this. Giuliani, much like Trump releasing the transcript, thought that this text message screenshot somehow vindicated him, somehow rendered the whistleblower’s complaint, null and void, when in fact all it did was verify the information that was in that making the complaint far more credible. Whistleblower said Giuliani over the summer was sending messages to both Volker and Yermack. And Giuliani says, no, I wasn’t. Look at my text messages between Volker and Yermack. Dumbest attorney in the United States, hands down Rudy Giuliani. And in fact, if you look up legal malpractice and the standards that have to be met in order to Sue a lawyer, your lawyer for legal malpractice, Donald Trump has a slam dunk case right now. If he wants to Sue Rudy Giuliani, I know he’s big on suing, uh, people. Why not make your own lawyer the subject of your latest lawsuit because this guy just shipped you down the river bud. He doesn’t even know it. Giuliani doesn’t realize how bad this is for him and his boss, but this is pretty damning info because it shows us along with the transcript that also corroborated the whistle blowers complaint. That’s so far, every piece of that complaint has been proven true. And the two people who are trying to defend themselves are the same two morons who’ve given us all of the evidence.