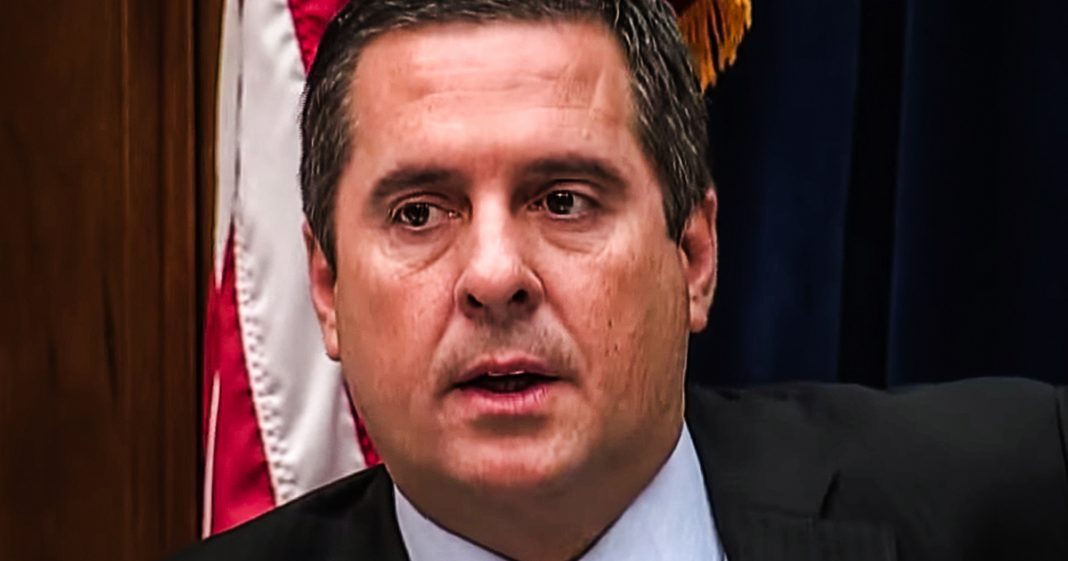 During an incredibly bizarre hearing yesterday, Republican Congressman Devin Nunes accused Democrats of trying to obtain nude pictures of Donald Trump from sources in Ukraine. Not only is this a completely oddball thing to suggest without any supporting evidence, it shows how much the Republicans are willing to strawman these arguments in order to protect the President. Ring of Fire’s Farron Cousins discusses this.

*This transcript was generated by a third-party transcription software company, so please excuse any typos.
So yesterday there was obviously quite the spectacle in Congress as a law makers spoke to a director of national intelligence Maguire and Devin Nunez, one of the very first Republicans to go, decided to use his time to attack the Democrats to say that the Democrats were drumming up yet another witch hunt, and oddly enough that the Democrats want to get naked pictures of Donald Trump. Now, I wish, I wish I was exaggerating when I said that, but unfortunately that is what Devin Nunez said on the record in Congress during a congressional hearing about the president’s misconduct, Devin Nunez, the man who is suing to parody Twitter accounts because they made fun of him. The man who lied about his wife being harassed at school now is accusing democratic law makers of speaking to people in the Ukraine or according to him who they thought were from the Ukraine about getting their hands on naked pictures of the president of the United States. Now, some people think that Nunez is referring to the pay tape mentioned in the Steele dossier that never materialized and likely does not exist. But a tape is not a naked picture. It tapes the tape and I think Devin Nunez is smart enough to know that. And uh, I have no idea what he’s talking about with these naked pictures, but I’m gonna go ahead and remind Devin Nunez that nobody in this country wants a naked picture of Donald Trump. Nobody. I’m pretty sure even his most hardcore supporters would be like, yeah, no thanks. I don’t, I don’t need to see that. Not to mention the fact that stormy Daniels, uh, did a fairly disgusting job of describing what a naked picture of Donald Trump would look like. So we don’t need more than that, uh, description that was, that was pretty jarring as it were. But nonetheless, what Nunez is doing here is he’s creating this straw man argument. He’s trying to say, look how insane and extreme the Democrats are because they even want naked pictures of Donald Trump. Well, we don’t want naked pictures. Donald Trump. As I said, nobody wants naked pictures of Donald Trump, but he’s leading us down a path of ridiculousity. I guess because the level of ridiculousness in that statement is off the charts show. If he can distract people with this stupid argument, force people to argue the stupid point that no, we don’t want naked pictures of the president. Anything he can do to distract people away from the real issue at hand, which is the Donald Trump asked a foreign power to interfere in the election. Whatever he can do to get people to not talk about that is a win for Devin Nunez, but I don’t think Nunez understands the gravity of this situation here. I don’t think he realizes that the public is not going to be misled. The public understands the Democrats aren’t the bad guys here and the public understands by large margins that uh-oh the president very clearly broke the law in something needs to happen. Nobody is being distracted by your naked photo comment, Devin, maybe you should focus more on those ridiculous lawsuits you have filed and less time on wasting everyone’s time in the house of representatives.