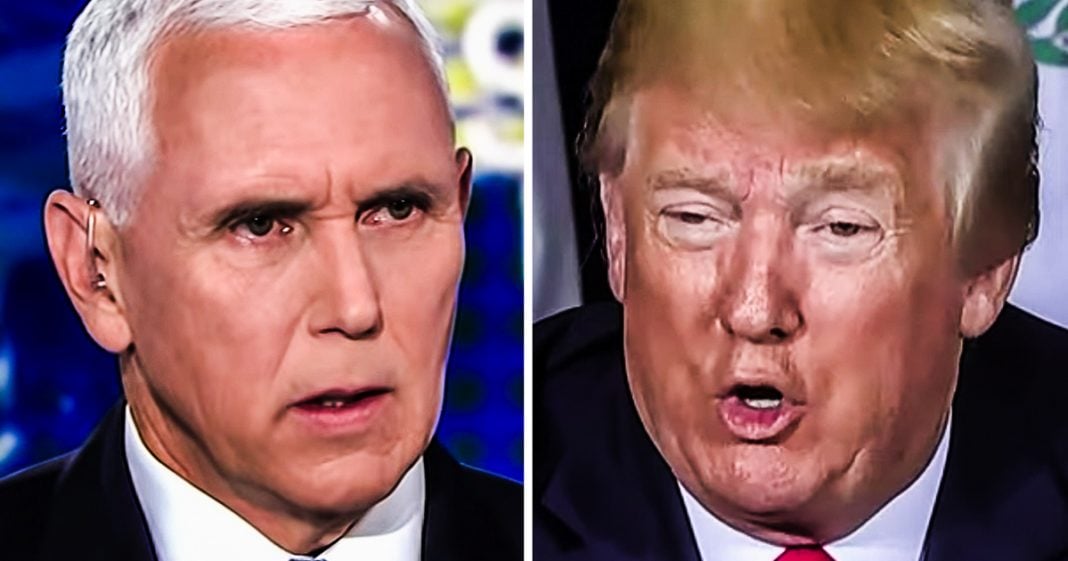 Donald Trump made a huge gaffe while talking to the press by saying that Vice President Mike Pence should also be forced to hand over his conversations, because he made quite a few himself. Trump then tried to say that those calls were also perfect, but his statement makes it clear that he is going to take everyone down with him. Ring of Fire’s Farron Cousins explains what that means for those involved in this scandal.

*This transcript was generated by a third-party transcription software company, so please excuse any typos.
If Donald Trump goes down with this impeachment inquiry, then dammit he is taking everyone with him. And he made that abundantly clear yesterday during a press conference while he was at the UN general assembly when he made the following statements he says, and the witch hunt continues but they’re getting hit hard on this witch hunt because when they look at the information it’s a joke impeachment for what? When you have a wonderful meeting or you have a wonderful phone conversation and I think you should ask for VP Pence’s conversation because he had a couple of conversations also, but the word is that they’re only going to ask for the first phone conversation. You can have it anytime you need it. And also Mike Pence’s conversations which were I think one or two of them. They were perfect. They were all perfect. See what happened and that will statement that he made, he caught himself, he realized he was throwing his own vice president under the bus at that point. So we had to add it. They were perfect. But I think you should also probably take a look at those cause cause maybe it was Mike Pence doing all this. Maybe Mike Pence is the real bad guy here. Pence and Biden. Yep. Those guys. Get them on out of here. I’m with you on that. Uh, here’s the thing. We knew that Donald Trump was absolutely not loyal to anyone other than his bank account. And this is my message, not necessarily for the average ring of fire viewer, though we appreciate you. This message is for literally everyone in the Trump administration. If he goes down, he’s taking all of you with him. You won’t escape. He will throw each and every one of you individually under the bus that is headed straight for him in order to slow it down. And that includes Mike Pence. He tried it yesterday, he tried it yesterday. Bill Barr, he would throw you under the bus in a heartbeat to save his own ass. Jared Kushner, definitely same to you. He did it with Jeff Sessions. He did it with Comi. He will do it to every single one of you. And folks when there’s not, uh, enough administration officials, left staffers, he’s coming after you. I mean, you see what they’re already doing to the whistleblower right now, trying to claim that they were hardcore anti-Trump or trying to smear this person who worked in the intelligence community for being worried about their country. It’s going to happen to each and every one of you. I promise you that. I promise you that. Don’t go down with the ship. You don’t have to each and every one of you has a choice. You could save your career. People like bill Barr and Mike Pence, no, they can’t save their careers. That’s obvious. The rest of you, the staffers, the whistleblowers, the underlings, I guess you guys still have a future, but not if the president tarnishes your name and those days are coming. It’s not an if it’s a win. You want to do the right thing. You want to save your own future than you best throw him under that bus before he picks you up to toss you.