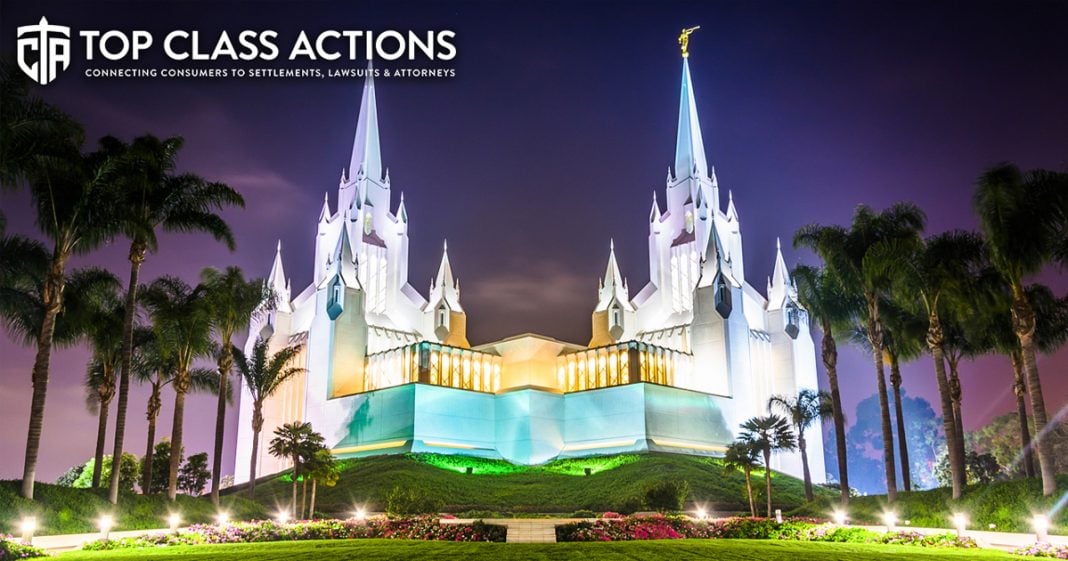 The Corporation of the President of the Church of Jesus Christ of Latter-day Saints has filed a motion to dismiss a class action lawsuit that claims the LDS religion is a “scheme of lies.” Plaintiff Laura A. Gaddy says the LDS church influenced through misrepresentation and concealment to engineer an attraction to faith in the core beliefs of Mormonism. Ring of Fire’s Farron Cousins discusses this with Scott Hardy from Top Class Actions.

Joining me now to talk about this lawsuit is Scott Hardy with Top Class Actions. Scott, this is a very interesting one here against the Mormon church for again, operating with what they’re describing as a scheme of lies. Tell us about this one.

Scott Hardy:                          Yeah, this was a, as you said, it’s quite interesting as you read through it and how the plaintiff, Laura Gaddy, says that the LDS church influenced through misrepresentation and concealment to engineer and attraction to faith and the core beliefs of Mormonism. And she’s, she’s going ahead and making a number of allegations. But what this, the Mormon church right now is trying to get the class action dismissed because the Mormon church is saying it’s not up to a court to determine whether a religion is true or not.

The Mormon church has come up and said, listen, if you’re, if you’re saying that this is a valid lawsuit, then you know, you need to go ahead and take a look at all the other religions. But I don’t know if that will actually really hold water here because she doesn’t just say that what the Mormon church is teaching is false. She specifically says how the Mormon church goes about their business is illegal. I mean just like a lot of churches out there, they depend on their members to do a lot of work and that way they can put more of their money instead of paying staff into, you know, doing Mormon mission work and that kind of thing.

If you’re being scheduled by the church to do tasks around the church, then you’re, you are an employee. This isn’t saying go ahead and pay all of the, give the parishioners back wages, but it is stating that there, there is a lot of, of deeper accusations within the class action itself. Not specifically stating that Mormonism isn’t true, but how the church is teaching its core doctrine may be false and that they may be teaching in a way that is driven just to drive revenue to the church and free labor.

Farron Cousins:                  Right, so it’s not, it’s not saying that, you know, the, the core principles of the Mormon faith, it’s not, it’s not challenging those whatsoever. More challenging the fact that, hey, you’re telling me that in order to be a good Mormon, I’ve got to show up and cut your grass, you know, when I’m scheduled to do it or I’m scheduled to go out and be it be a missionary here? That, that doesn’t really square up. It sounds like you’re just trying to get some free labor out of all your followers here. So that’s what the suits about. Just so everybody’s clear on that. This has really nothing to do with what the faith itself is teaching. Just the manner in which they’re, I guess, using their parishioners here.

Scott Hardy:                          Right. I mean, because you gotta think that if you take a look at it from a corporate perspective, the Mormon church has their Mormon missionaries, which go all around the world trying to spread the world, spread the word. And those folks are essentially salesmen. They’re selling the church. Once they get somebody to convert, that person starts working at their local church for free and starts contributing and tithing to that church. And so you have these salespeople that are going all over the world selling that religion and ,you know, they’re not compensated for it, they’re volunteering, right.

And you take a look at exactly how this church and others work from that perspective and a lawsuit like this makes more sense because it’s all about the money that’s coming in and how they are getting that money. They’re making their people work, they’re mandating volunteering, and then the church itself is profiting for, on the backs of that labor. And if they’re profiting off the backs of their members by not being forthright in all of their teachings or by having specific contradictions within their teachings, then that could be a problem.

Farron Cousins:                  You know, the way you describe it there, it almost sounds kind of like a pyramid scheme. I mean, I don’t want to say that it is a pyramid scheme, but wow. I mean, the definition based on what you’re describing here kind of seems to fit a little bit. You know, you go out, you do this work for free for us and part of that work includes recruiting others who then are going to go out and do work for their local LDS church and, and so on and so forth. But you got to recruit others to do this too. I mean that, you know, let’s not split hairs here. That really sounds like a bit of a pyramid scheme.