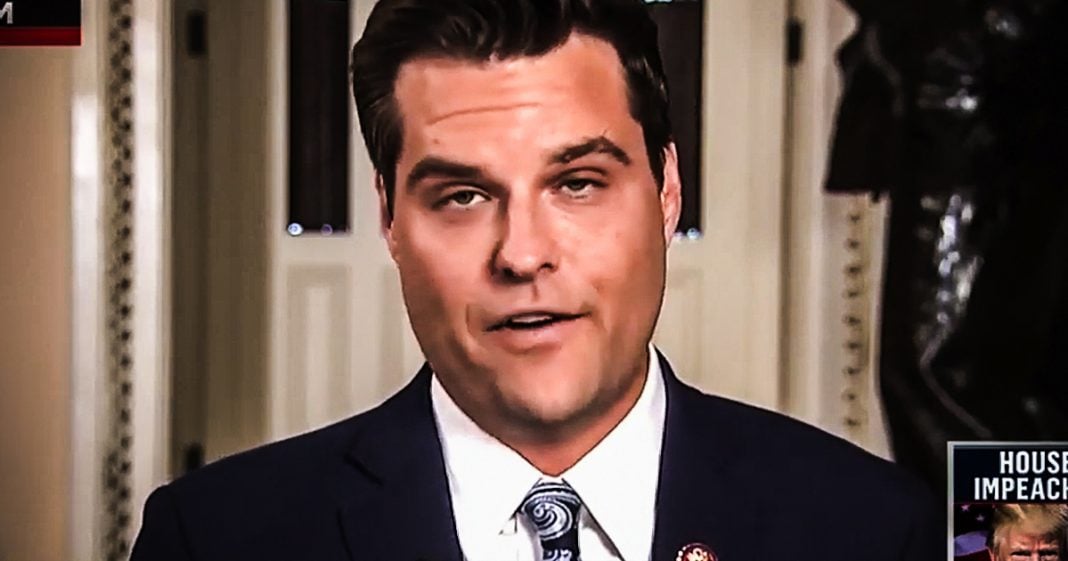 Republican Representative Matt Gaetz is usually unflappable in his talking points about how much he loves the President and in his defense of the President, but MSNBC caught him off guard when he accidentally admitted that Trump allowed certain Republicans to read the Ukraine phone call transcript before it was released. Ring of Fire’s Farron Cousins discusses this.

*This transcript was generated by a third-party transcription software company, so please excuse any typos.
Republican representative Matt Gates is typically unflappable. Right? He has his lie. He sticks to his lie. Anytime he goes out in the media, he spreads that lie with confidence and never once shows any kind of indication that he may have said something stupid, even though he always says something stupid. Well yesterday while speaking to MSNBC’s Hallie Jackson. Matt Gates said something so stupid and so incriminating that he actually didn’t know what to say when he was asked about it. Here’s the clip.
[Have you had a chance to review and read these transcripts that we’re talking about? Yeah, I’ve had the chance to review the transcripts and chat with the president about them. I think what we see here is this figure that house. Yeah, we went over to the white house- Who is we Congressman, you and Democrats, just Republicans. Uh, I, uh, I didn’t take any, I didn’t check anybody’s voter registration card, but I can tell you that Democrat, what you see, you should want out to the president called Rose or different was a group of legislators. Holly. The bottom line here is that in this transcript there is no quid pro quo. There is no improper leverage and the overall tone of this transcript is that it is mutually laudatory. You have presidents, Alinsky and president Trump both complimenting one another for trying to root out corruption in their respective countries. And I think it’s important context that Solinski wins his election on an anticorruption campaign. And so it’s only natural that that would be something that would be discussed. Frankly, if the Democrats, they’re going to impeach on this, I think that it will be politically fatal for them. There’s a lot to unpack in that. Congressman, let me just go back. So I want to be real clear about this. When the president invited you and your colleagues, some of them over to the white house this morning, where any Democrats also invited, or was it just a group of Republican? I’ll leave. I’ll leave that to the white house to chat with you about]
Hallie Jackson in that clip deserves a ton of credit because that is exactly what these hosts are supposed to do. You don’t just let a statement like that fly past you and then start trying to converse about the lie that he’s telling. No, no, no, no, no, no. He accidentally revealed some very important information there. You need to dig in on it. And that’s exactly what Hallie Jackson did. And I love that. And the media would be a lot more honest if they would do that more frequently. Yeah. We went over to the white house and woo, we, who the hell is we? What’s this way you’re talking about? And then Gates is, is, Oh yo, ah, blah, do blah blah blah. [inaudible] maybe I don’t know who they were. I didn’t check their IDs really, as Hallie Jackson points out. You know who the Republicans are and who the Democrats are and you know who you went with. Stop being a child about it. But Matt Gates is the perpetual child. The the kid that lived his life without consequences. You know, daddy bailed them out of a couple of DUIs. Daddy got him all his jobs. And daddy’s clout down here in the state of Florida is what led to Matt Gates becoming our stupid Congressman from my area. This is not good for you, Matt, you and a group of Republicans and now reports are saying it was roughly one dozen Republicans went to the white house, got to see the transcript of this Ukraine call prior to anyone else seeing it. You got to get the spin on it. You got to hear the white house’s angle on it and you basically all got to sit around and craft an emergency response. That’s what happened here. And you got called on it and you didn’t know what to say. And see, this reminds me a lot of another politician from the state of Florida, Marco Rubio. I remember watching Marco Rubio even before he was in the Republican primary debates in 2015 and every time he talked, you could tell if you ever were able to pull him off his talking points. He sounds like a rambling, bumbling idiot. Matt Gates is the same way, and now we know Matt Gates weakness, call on Mona’s crap, pull them off topic, and suddenly he turns into a bumbling. Uh, I don’t know. Oh, that’s fantastic. So thank you, Matt Gates for showing us how to completely blow your cover and show everyone else in this wonderful area that I live in. What an idiot their Congressman truly is.