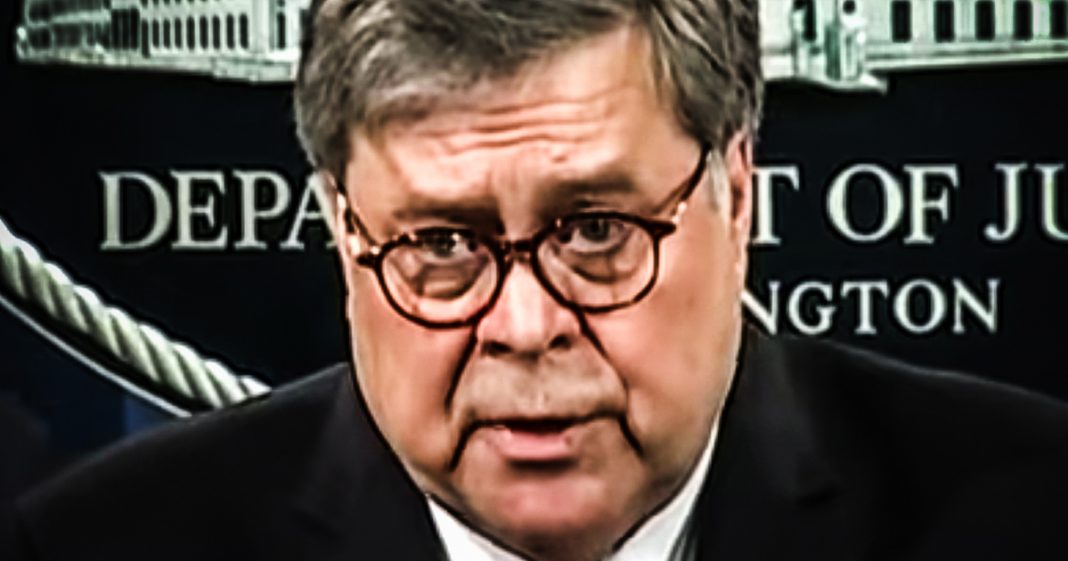 Within the past two months, the U.S. Department of Justice decided that they didn’t see anything wrong with Trump’s Ukraine phone call and said that they wouldn’t be investigating it. Specifically, they said that it didn’t violate campaign finance laws, which is a very weird item to look at with regards to the nature of the call. Ring of Fire’s Farron Cousins explains how Trump’s DOJ is going to protect him until the bitter end.

*This transcript was generated by a third-party transcription software company, so please excuse any typos.
As the a Trump Ukraine phone call story continues to dominate the news. There’s one very important thing that we all have to keep in mind. Donald Trump did nothing wrong. Donald Trump did not break any laws and Donald Trump is just a fine, upstanding citizen just trying to do his dang job, or at least that was actually the conclusion of the United States department of justice within the last two months when they were actually presented with the information about Donald Trump’s Ukraine phone calls and they looked into it and they decided, you know what? This doesn’t violate a campaign finance laws, so we’re not really going to investigate it, and we’re sure as hell not going to prosecute it. Case closed. The DOJ before the public even knew this was a thing, had already determined that they were going to protect Donald Trump and they would not even investigate it on the very flimsy pretense that it didn’t violate the FECs campaign. Finance laws. K, let’s take a look at this real quick. Sure. Maybe it didn’t violate the campaign finance laws, right. Because even when you’re not talking about money, you can still violate a finance law, which would be receiving something material to help you in the campaign. So if they did get some kind of dossier on Biden, that would be a campaign contribution, but they didn’t get it, at least that we know of. So sure, there was no campaign finance violation, but that’s not what this is about. It’s not about did he get it? It’s that he attempted to do it. You know, almost like the collusion thing. Maybe they didn’t successfully collude, but they dang sure wanted to collude. Same thing with this story. They may not have gotten Joe and Hunter Biden thrown in jail, but they wanted to and they asked a foreign leader to basically make that happen. And the DOJ own, William Barr was offered up as a peace offering to the president of Ukraine in order to make this, you know, go a little bit faster. So then Barr’s office comes out and says, ah, I don’t see anything wrong with this Bill. You want to go to Ukraine? No. Okay. All right. He’s good. Bill’s not going. This is nuts folks, but it’s the kind of nuts that we had expected. William Barr and the DOJ is going to do whatever they can do to protect Donald Trump because that’s the entire reason William Barr has that job to begin with. The cover up guy. That’s who William Barr is the cover of general. That’s why he’s there and it served him well for the Mueller investigation. Man. William Barr really butchered that Mueller report. Didn’t he butchered the, a summary of it that he released and the public eventually moved on and said, okay, well there’s nothing we can do. Mueller himself said he couldn’t find collusion because of all the obstruction, but we’ll leave out because of all the obstruction part, but nonetheless, William Barr is going to be working overtime for the next few months to make sure that Donald Trump doesn’t get in trouble, and if Trump has to, as I’ve previously pointed out, he’s going to throw William Barr under the bus and that might be the saddest thing about this little friendship they have going, is that William Barr does whatever it takes to protect his president, his boss. In this case, it’s Donald Trump. Donald Trump would not return the favor for William Barr. Donald Trump right now is gearing up to throw literally every one he can reach under the bus that’s headed towards him, the impeachment bus. He’ll throw them all under it. And as Barr is sailing through the air, heading towards those bus tires, his last statement will be, Trump did nothing wrong. And the bus is so common, and that’s the thing Trump can’t get out of the way of, you can throw every member of your staff onto that bus, but it’s not even going to slow it down. So yeah, the DOJ looked at this and said, Nope, we’re just a bunch of idiots. We’re not going to prosecute. Because we decided to look at a very narrow scope of it instead of the fact that the request itself was illegal. Instead we want to focus on the stupid thing so then we can say, Nope, we looked at it. It’s dumb. We’re not prosecuting. We can expect a lot more of that. And just remember it’s because they’re not looking at the actual illegal things he did, and they’re trying to come up with as many justifications as possible to convince the public that the president was just a super great guy.