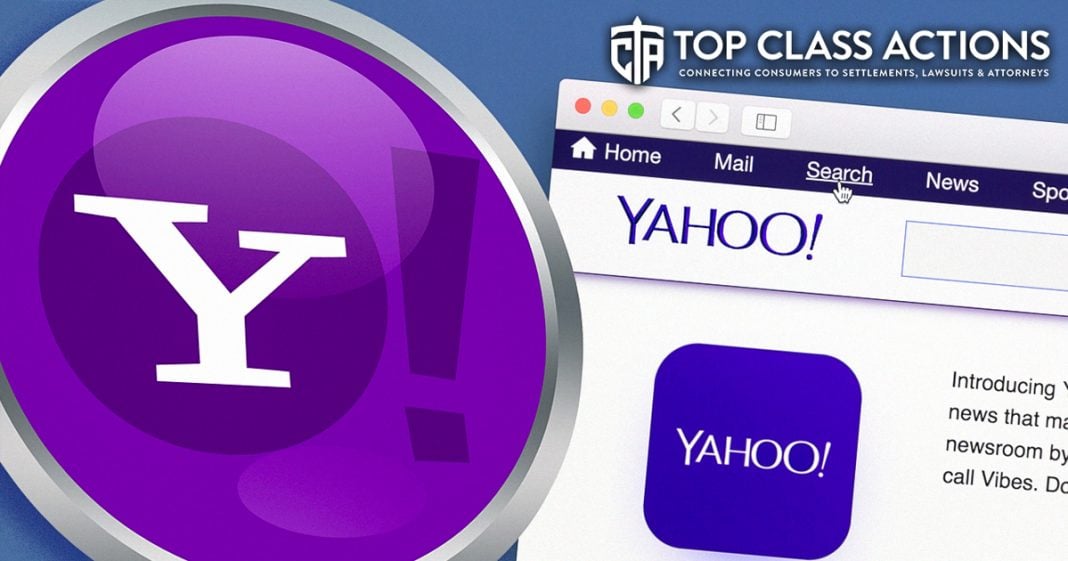 A $117 million settlement will resolve a Yahoo class action lawsuit over multiple data breaches affecting billions of users. Those in the United States and Israel who had an email account through Yahoo or other other websites, such as Yahoo Sports, Finance, Tumblr, and Flickr between Jan. 1, 2012 and Dec. 31, 2016 may be Class Members in this settlement. Ring of Fire’s Farron Cousins discusses this with Scott Hardy from Top Class Actions.

Farron Cousins:                  For many years now, the people who had their personal information leaked during the massive Yahoo data breach that took place over the course of several years, they’ve been fighting to be made whole again. And the lawyers who have been fighting this against Yahoo have finally come to an agreement with the company. The company finally came up to a number that was acceptable for the victims here.

And joining me now to talk about this settlement is Scott Hardy with Top Class Actions. Scott, initially Yahoo wanted to pay 50 million, but a judge said, uh-uh, that ain’t going to cut it. So now Yahoo and the attorneys have come to an agreement, it went from $50 million to $117 million for these victims. That’s a huge sum for the people who had their data breached here in this issue.

Scott Hardy:                          It sure is. It’s a big win for consumers, I think. And especially if you’re a, if your identity was stolen and you suffered damages on that, you could get up to $25,000 from this settlement. You’ll have to show the damages that were occurred, show documentation. But that’s a, that’s a big chunk of money. You know, along with all these data breaches, you know, we see that happening where these data breach settlements, if you suffered losses you can, you can send in the proof and get paid for that. Something that I think is very interesting about this settlement is that you can also get paid if you paid Yahoo as a subscriber.

So if you were a subscriber to actually, to, if you’re a subscriber that wanted to avoid their ads, you can get paid for that. If you were a business subscriber, you can claim up to $500 per year of service during the class period. And so, you know, if, if you used Yahoo fantasy sports, Yahoo Finance, Tumbler, Flicker between January, 2012 and December 31st, 2016, you can, you’ve got may very well have a bigger claim if you paid extra for any of those services.

So you really do want to take a few minutes read through this settlement to see what’s out there for you. It’s different than the average data breach settlement, which is submit your claim for free credit monitoring. If you were affected, submit your proof to get more extra cash on top of it. This one has some more incentives for different subscribers of Yahoo Services.

Farron Cousins:                  So what can people do? I mean obviously some people who had their data leaked here, they understand it, they know what happened. Is there anywhere they can go to check and see if their data was compromised, if they had one of these accounts?

So if you say, I don’t want free credit monitoring from you guys, what I want is I want you guys to pay me some cash upfront, then they very well may ask for documentation showing that you already have credit monitoring because they’re pushing that very, very hard. But, you know, this is overall I’d say a good settlement for consumers.

Farron Cousins:                  And I think what’s important here that people also kind of need to take into account is some of the information that was leaked, obviously, you know, email addresses, phone numbers, date of birth, but security passwords. So basically your password for your account. And for a lot of people they use the same password over and over again. You know, this is my password for Yahoo. It’s also my password for my bank account and my Netflix account and every other account I have. Um, stop doing that. I mean, I hate to say it like that and I know it’s frustrating, but people please do not use the same password over multiple different websites because then not only is your data at risk for that one site, you’re, you’re spreading the risk across all of your accounts.

You have to keep separate passwords, you have to keep these accounts different in as many ways as possible. Do not use the same security questions, you know, for, for each website because all it takes is one breach like this and they can use this information to find out where your bank is, who your bank is, where your credit cards are. And then they’ve got that password too and that’s going to lead to even more problems than just the initial data breach.

And so just like you said, please change your password, use different passwords on iCloud, on Google, on Facebook. That, that’s great advice that you’re giving because that will save users a lot of headaches when these things happen in the future. Because as you and I know, we discuss data breaches on a regular basis, there will be more.

Farron Cousins:                  The other side of that too is that if you don’t use different passwords, you have to go back and change all of them when something like this happens. I actually, my Netflix password a couple months ago got leaked out there and, you know, it’s unfortunate that somebody’s got to watch a couple movies for free before I changed it. But it also wasn’t that big of a deal because I use a separate company, privacy.com actually to mask my bank information.

So they couldn’t get that and they can’t use that password on any other account that I have. So it really, I’m telling you folks, it really does save you in these particular situations. So Scott, so people who are eligible for this class, this Yahoo settlement, this $117 million, where do they go from here? Where do they go and sign up for this?

Scott Hardy:                          They can go to the topclassactions.com. They could read the details of the settlement. They can actually click through it to submit their claims. We have all the information right there on what the different levels are. You can claim how much you might be eligible for and how to take care of it.

Farron Cousins:                  Fantastic. We have a link to that page on Top Class Actions in the description of this video. Follow that, sign up, only takes a few minutes and given the size of this settlement, it is well worth it. Scott Hardy with Top Class Actions. Thank you very much for talking with us today.