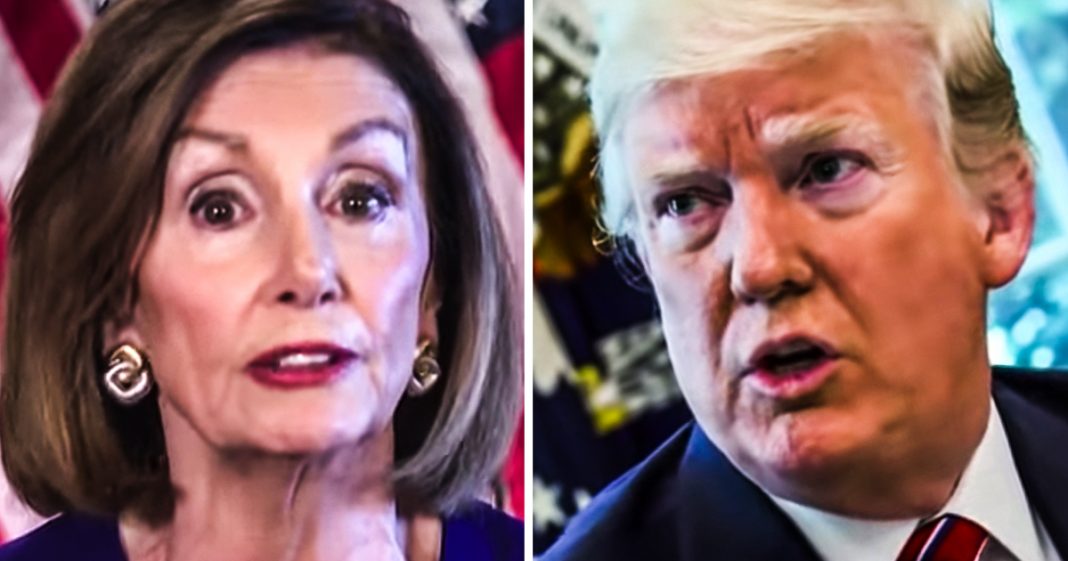 According to reports, Donald Trump allegedly tried to bribe Nancy Pelosi to not begin a formal impeachment inquiry by offering to do something on issues that she cares about. Pelosi refused, and now we’re in the early stages of an impeachment inquiry against the President. He’s obviously scared, and considering the fact that he’s already admitted to doing what he’s accused of doing, he should be terrified. Ring of Fire’s Farron Cousins discusses this.

*This transcript was generated by a third-party transcription software company, so please excuse any typos.
So yesterday afternoon, Nancy Polosi finally did the thing everybody’s been wanting her to do and announced that the house of representatives will be starting a formal impeachment inquiry into Donald Trump specifically targeting his actions with the Ukraine phone call. But there were more interesting developments than just Pelosi coming out and announcing this. And one of them came from Pelosi herself mentioning the fact that she had a phone call with Donald Trump while he was, I guess on a break at his little UN general assembly. And he made a phone call to Pelosi where according to sources he allegedly offered to kind of work on one of Pelosi’s pet issues. Specifically gun control is what Pelosi mentioned. And uh, all she had to do was kind of work with him on this whole whistleblower complaint thing. She said it was a very interesting conversation. That’s how Polosi herself described. It was very interesting. And all of this happened before she made her announcement that there was going to be this formal impeachment inquiry. So obviously the president is scared about what’s going to happen. He’s also very scared about what’s going to come out when this whistleblower complaint is finally released. So he was willing to basically fall on his sword and say, look, I’ll give you whatever you want. You want gun control, consider it done. All you got to do, Nancy, is just play ball with me. Maybe we don’t need this complaint to come out and maybe you don’t need to go forward with impeachment. And it really gives you a sense of how Donald Trump did business before he became a politician. You know, Hey, uh, we really need this building, but, uh, I know you need this for me, so how about you sell me this building? I’ll give you this thing. Everybody walks away happy, right? That’s not usually how it works in politics though, right? It’s a little more nuance than that. You really can’t go straight up and offer some kind of quid pro quo. You scratch my back, I scratch your back. I know it happens. But with politics it’s a little trickier because it’s not just one final transaction. What happens in Congress has lasting ramifications. And I don’t think Trump was thinking that through. He just wanted to get Pelosi where he wanted her, but she didn’t budge. So to her credit, I’m very proud of Nancy Pelosi for that. I’m still unhappy about the fact that she dragged her feet for so long on this issue and I do not believe that we’re ever going to find out, Oh my God, she was playing 3-D chess this whole time. I don’t, I think she waited till it was politically convenient for her and that’s why she made the move. Now, we could have done this a very long time ago, but she didn’t wanna, you know, ruffle any feathers. But that’s not how the law works. Sometimes you gotta ruffle those feathers. As we have stated repeatedly back when the impeachment inquiry began on Richard Nixon, majority of people in this country did not support it. But then suddenly once they started uncovering information, the approval of that impeachment shot up in a majority of people suddenly did support the impeachment inquiry. And they uncovered so much that Nixon ended up having to resign before they could finish the process. Something like that could play itself out here with Donald Trump. He doesn’t even have as high of an approval rating as Richard Nixon had. Uh, it’s likely that he’s committed far more crimes than Richard Nixon has. So why the wait? Well, according to some Democrats in D C it’s because this issue that Ukraine, uh, bribery phone call, essentially the treason, uh, is easier to explain to the public then obstruction of justice or emoluments and all those, you know, big, fancy legal words that the average person kind of tunes out. Maybe they think they’re not big deals. So Polosi she, I guess, wanted to wait till she had the big one, ignoring the fact that all of the little ones added up to probably more than the big one. So here’s my hope is that when we do finally come forward with the articles of impeachment, that it does not just include this Ukraine a deal that Trump was trying to broker. It has to contain, everything has to contain the emoluments clause violations. It has to contain the obstruction of justice. It has to contain every single thing that this administration has done, so that at the very least, the public can see it all right there in black and white, the long list of Donald Trump’s crimes, and then match that up with all the Republicans who vote to keep this guy in office.