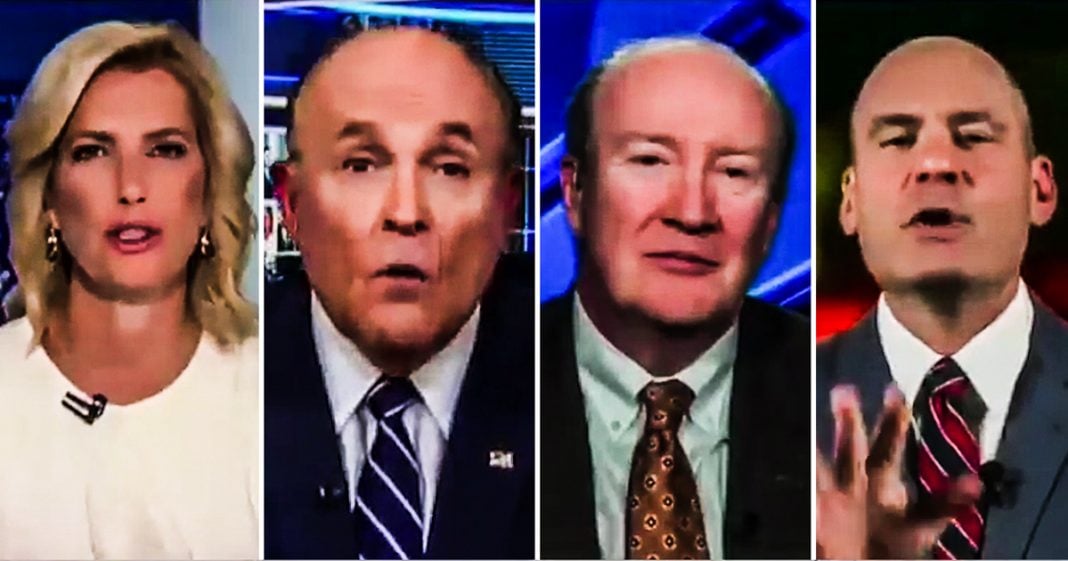 Rudy Giuliani is back in the media again, and he’s just as unhinged as ever. Giuliani appeared on Laura Ingraham’s program on Fox News on Tuesday evening to discuss impeachment where he began to lash out a guest who reminded Giuliani that he is right in the middle of the current presidential controversy. Ring of Fire’s Farron Cousins discusses Giuliani’s latest meltdown.

*This transcript was generated by a third-party transcription software company, so please excuse any typos.
Whenever you’re accused of a crime, whether you’re guilty or not, you want to make sure that your defense lawyer is the best that you can get. And when you’re a millionaire or billionaire in the United States, you can afford the very, very best. You don’t have to settle for a rambling moron who goes on television and implicates your a you and further crimes. You don’t have to settle for an idiot who implicates himself in the criminal activity that you’ve been accused of. You’re a millionaire, you’re a billionaire. You can hire the best of the best of the best. Yet Donald Trump always looking for a good deal. Looking for the budget attorney picks Rudy Giuliani and Giuliani from day one has been nothing but an embarrassment for Donald Trump and last night, now that Giuliani’s back making the rounds on TV. Giuliani embarrassed not only himself, but also Trump and the kicker further implicated himself in this entire Ukraine scandal, but that’s not really the most important part at the moment. The most important part is that Rudy Giuliani absolutely lost his damn mind when Chris Hawn pointed out what Giuliani had said. On the program just a few minutes earlier. Take a look at Giuliani’s meltdown from the Ingram angle on Fox news Tuesday evening here. It is.
[Irresponsible ways. Yeah. Well you, you actually usually say incredibly stupid thing. You’re a public figure. Yeah. And uh, by the way, do you have any idea that the state department and go the live shut up. Shut up. Shut up. You don’t know what you’re talking about, Chris. You don’t know what you’re talking about. Idiot. I do. The state. No, you don’t. You just lie. I wish you would stop. You lied my friend. Stop. Mr [inaudible] wish you would stop. Why don’t you tell him to keep his mouth shut so we can tell the truth. Just keep your mouth shut. Okay. He said,].
yeah, those are totally the actions of a guy who didn’t do anything wrong. And as I had previously stated, Giuliani in an earlier segment on that program admitted he went over to the Ukraine. He talked to them about investigating Joe Biden, and he did it at the request of the U S state department, which is something he had also previously said on Sean Hannity’s program not that long ago. So Giuliani admitted to crimes, admitted that the federal government directed him to go over there and do this. And Giuliani is still the president’s lead attorney and he’s neck deep with the president in this particular scandal. That’s what I don’t think Giuliani quite understands. And that’s why he got mad and he lashed out and says things like, shut up, moron, shut up. You don’t know what you’re talking about, idiot. You’re just lying. You keep your lying mouth shut. Yeah. That’s not going to hold up in court, buddy. Look, Giuliani, do yourself a favor. The last few times you’ve gone on Fox news, you’ve implicated yourself even further in this scandal. And I know you love the lights and you love the camera and you love the attention and the admiration that you get from the Fox news host. Uh, but you could end up in jail, right? You, you don’t have any of that perceived presidential immunity that Trump believes he has, even though he doesn’t technically have that either. Uh, so yeah, you, you’ll be in a lot more trouble than the president on this particular issue. So if you can resist the urge to go back in front of a camera, resist the urge. When those Fox news producers come calling and say, Hey, Hannity wants to have you on, or Laura Ingram wants to have you on, just say no, because otherwise you’re doing so much damage, not just for yourself, but also for your client. So you may have a little bit of legal malpractice in there too. And the more you get out there and have these on air meltdowns on live TV, yeah, the less likely a jury is going to take you seriously. If you ever actually have to represent Donald Trump in a courtroom.