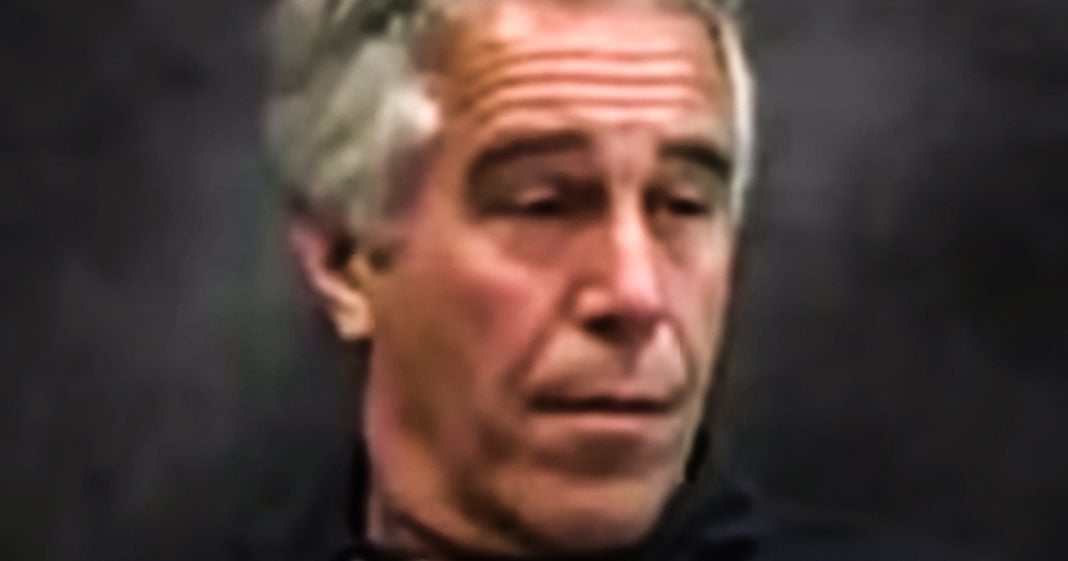 According to a new report, Jeffrey Epstein allegedly arranged hush money payments to buy victims’ silence while he was sitting in a prison cell in New York. If these reports are accurate, it shows that Epstein was still very much in control of his fortune, and that he had people loyal enough to him to make these arrangements. Ring of Fire’s Farron Cousins discusses the latest developments.

*This transcript was generated by a third-party transcription software company, so please excuse any typos.
An interesting new report came out yesterday from page six that alleges that Jeffrey Epstein was actually directing hush money payments to some of his victims from behind bars in New York. Now given the source, this is paid six, you know, this is kind of gossip celebrity rumor nonsense. We have to take this story with a grain of salt, but I do feel that it is worth fleshing out a little bit. Now according to page six, the source they spoke to who gave them the story exclusively says that Epstein had confidons that he was working with from behind bars who were instructed to go hand out envelopes of cash to victims. In exchange, the victims would not talk to the press. In essence, they weren’t going to go out there and tell their story, name names. They were going to take the money and just sit back and be quiet. Uh, the source said that these envelopes of cash allegedly contained $10,000 a piece and that they were given to at least two different women because these two women, again, according to the source with page six, claimed that they were anxious that the FBI was going to come talk to them, that the police were going to come talk to them, that the press was going to come talk to them. So they want to do arrange, these hush money payments, which Epstein again, allegedly did from behind bars to ease their, their anxiety a little bit. Now, the reason this story is even worth discussing at this moment, given the fact that page six isn’t always the most reliable source, is because Epstein does in fact have a history of doing this, which does lend a certain amount of credibility to these new accusations. Uh, back in July, federal prosecutors did allege in court documents that Epstein had arranged for hush money payments to some of the victims, uh, some of those payments totaling up to $250,000. So prosecutors had the evidence to suggest that Epstein had done this in the past. So again, makes the story a little bit more believable here, considering this as something Epstein’s done, but you always do have to consider the source. We kind of have to take the story with a grain of salt at this moment and the best we can hope for is that these prosecutors, even though they can’t send Epstein to prison forever, they can get justice for these women. They can take down those confidants, they can take down the people who worked with Epstein, who worked as sex trafficking recruiters like Ghislaine Maxwell. Those people are still out there. They are equally as dangerous as Jeffrey Epstein was. They shouldn’t be walking around free. They should all be rotting in a prison cell. So hopefully the prosecutors are still working on this. I know the civil suits are still out there and that’s great, but we still got to take down the bad guys and Ghislaine Maxwell is right at the top of the list of bad guys after Epstein allegedly offed himself and she needs to be investigated. She needs to be indicted. The people who are allegedly making these hush money payments for Epstein at his direction from behind bars, they need to be investigated. This story didn’t end with Epstein’s death. This story ends when all of the people involved are serving life sentences in a federal penitentiary.