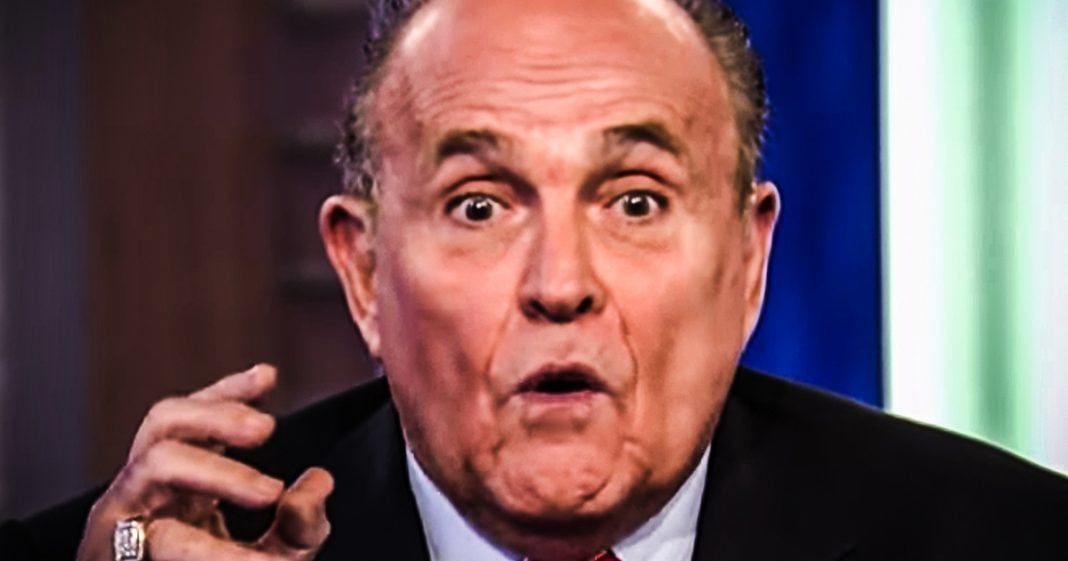 A group of former federal prosecutors are arguing that Rudy Giuliani should not only be disbarred for his actions, but possibly even indicted if the allegations against him are true. Giuliani is said to have been one of the architects of Trump’s Ukraine request to investigate Joe Biden and his son. Ring of Fire’s Farron Cousins discusses this.

*This transcript was generated by a third-party transcription software company, so please excuse any typos.
By now, even Trump himself has admitted that, yes, he spoke with Ukrainian president, uh, Volodymyr Zelinski about Joe Biden. So that connection with this whole whistleblower complaint, they’re hiding the whistleblower complaint. Maybe the president committed treason on the telephone. Uh, that’s pretty obvious at this point. Like that part’s really not even that questionable. But one person who’s managed to, to a decent extent, escape a lot of scrutiny here is Donald Trump’s lawyer, Rudy Giuliani. Not that long ago, Rudy Giuliani traveled over to the Ukraine, and this was actually a big story at the time because it was suggested that Giuliani was out there talking to higher ups in the Ukrainian government, possibly a president Zelinsky himself, and, uh, was nudging them to investigate Joe Biden basically at the request of the president. That’s the part that has come out recently. In fact, Giuliani said that to Sean Hannity not that long ago. He was there at the request of the president, huh? Well, that information has not escaped the grasp of former federal prosecutors. And several of them now in the last week have come out and said, one of them said, uh, Joe, uh, Rudy Giuliani, excuse me, should be disbarred. He should not be allowed to practice law anywhere in this country anymore because of his actions. But another one went a little further. He said, Rudy Giuliani should be indicted. And after all, according to the DOJ, you can indict a sitting president. You can by the way though, but you can indict a sitting president. But Rudy Giuliani is not a sitting president. Rudy Giuliani can be indicted and Rudy Giuliani should be indicted. See, that’s what’s so great about all of this. For a guy like Rudy Giuliani who does not hold a public office, you don’t have to go through impeachment. You don’t have to launch these lofty investigations. You could straight up indict him today based on the evidence that he has said just on television. That’s all the evidence you need for the presumption that Giuliani committed a crime. So really law enforcement officers. What are you waiting for? Prosecutors. What is the holdup here? Do you want us to send you the Hannity clip? Because we can, it happened. He admitted it. So stop dragging your feet. Trump may be for the moment, untouchable, but Rudy Giuliani is not, and Giuliani has done a lot of damage in this country. He’s done a lot of damage to the city of New York, and I think it’s past time that he finally pay the price for it.