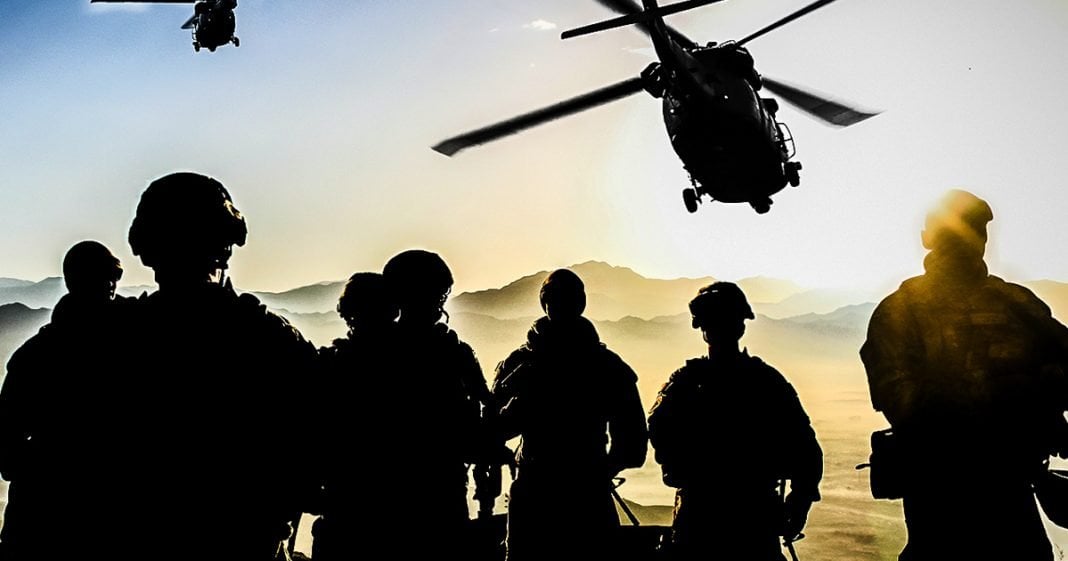 Hundreds of US troops headed to Saudi Arabia at the direction of Donald Trump late last week to help bolster the country’s security after the attack on their oil facilities. Our military is now having to play security guard for oil that Trump claims we don’t even need, to protect a country that is a well-known human rights abuser. This is madness, as Ring of Fire’s Farron Cousins explains.

*This transcript was generated by a third-party transcription software company, so please excuse any typos.
Last week, Americans were, you know, to an extent, rightfully so, distracted a little bit by the whistleblower complaint that the White House is trying to hide, showing that Donald Trump allegedly asked a Ukrainian president to essentially interfere in the US elections. And while we were all focusing on that, we missed a very big story. And that big story is that Donald Trump sent hundreds of US troops over to the Persian Gulf to help bolster Saudi Arabia’s security. And he has not in fact ruled out military action along with Saudi Arabia against Iran. The reason being, obviously Iran allegedly attacked ah Saudi Arabia oil and gas facilities, nobody died. There were no casualties from this attack. They just attacked their oil facilities. Saudi Arabia produces about 10% of the world’s oil. And according to Donald Trump, we’re not even dependent upon their oil anymore. We’re totally independent, but we’re still gonna send a couple of hundred troops over there to act as security guards to avenge that poor oil that got attacked allegedly by Iran because Saudi Arabia is our good buddy and we can’t trust them with their own security. So we’ve got to go over there and do it ourselves apparently because God forbid something else happened to the oil. Meanwhile, let’s not forget that we’re helping out a country that is routinely and regularly bombing children in Yemen. Where’s our security forces over there? How come we’re not going over there to protect children who are dying on a school bus because Saudi Arabian missiles are hitting them? We’re totally okay with that. We’re totally okay with them taking a journalist and cutting his body to pieces with a bone saw. That’s okay. According to Donald Trump and this entire administration of Saudi Arabia does that? Yeah, sure. Whatever, but God forbid a little bit of oil gets blown up. No human beings do, and then suddenly it’s boots on the ground. We’re ready to go to war because oil got spilled. This is madness, folks, and we can’t allow ourselves to continuously be distracted by the stupid crap that Trump does on a daily basis. We just can’t. We have got to look through the BS. We’ve got to have a better filter and we’ve got to pay attention to what this man is actually doing. You know, studies have actually come out that show that anytime this administration does something risky or anytime there’s real, legit, bad news about Trump’s policies, he goes out there and he starts tweeting crazy things and that distracts the public. And I know this wasn’t necessarily falling into that trap, but you can go back through his Twitter feed the last 72 hours, 96 hours, and see him tweeting out some pretty in comprehensible things. And all of that is meant to distract the public from what he’s actually doing. And what he’s actually doing is building up US forces inside of Saudi Arabia. Just in case we need to start another war in the Middle East.