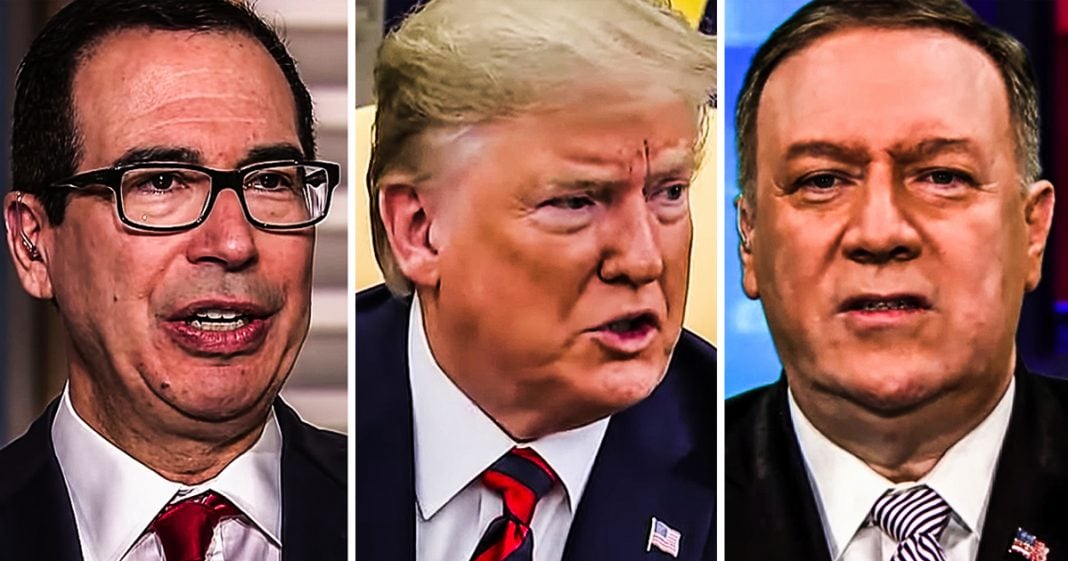 Secretary of State Mike Pompeo and Treasury Secretary Steve Mnuchin both said in separate interviews this weekend that transcripts exist of Trump’s call with the Ukrainian president, but the public isn’t allowed to see them. This is the first time that the existence of transcripts was confirmed, and it gives Democrats something else to go after. Ring of Fire’s Farron Cousins discusses this.

*This transcript was generated by a third-party transcription software company, so please excuse any typos.
Over the weekend. Mike Pompeo, the secretary of state, along with Treasury Secretary Steve Manoukian in two separate interviews on two separate networks, both separately confirmed that a transcript does in fact exist of Donald Trump’s telephone conversation with Ukrainian president Volodymyr Zelinsky, a transcript according to both of these men who were on different networks at different times. A transcript exists of this phone call, but don’t get your hopes up folks, because both Pompeo and Manoukian say the Democrats have no business knowing what was discussed on this phone call. Pompeo said those are private conversations between world leaders and it wouldn’t be appropriate to do so except in the most extreme circumstances. When asked about releasing the transcripts, Manoukian had this to say. You said, what I have a problem with is Congress asking for a transcript between world leaders. I think that those are confidential discussions and that’s it. Difficult precedent. Now I’ll tell you what a difficult precedent is, is having the president reach out to a foreign power and ask them to interfere in the United States elections that that’s probably the worst precedent from the worst president. But you guys are admitted now that there is, there’s transcripts that these things do exist, so here’s what’s going to happen. The Democrats are going to ask for those transcripts. Manoukian in Pompeo, are going to say, no. The Democrats are then going to subpoena for those transcripts and the Trump administration is still going to say, no. The Democrats are then going to take the court a case to court and Trump’s lawyers are going to go to court and they’re going to argue exactly what both of these men seprately argued on television that the Democrats have no business. This was a private conversation between world leaders and it sets a dangerous precedent depending on what judge this case goes in front of, who knows what will happen from there, but I guarantee you whatever does happen, we’ll be appealed. Then appealed and then appealed because that’s what’s happening with quite literally every single thing that the Democrats are trying to get from this administration that could implicate the president in some kind of very serious crime, which is exactly what this is. That’s what’s going to happen and it’s annoying. It’s frustrating. So. Here’s what I’m going to suggest. Somebody in the DOJ that is not at the very top of the food chain has access to this. Somebody at the DOJ has access to that whistleblower complaint, leak it sleek it, just do it. Yeah. You’ll probably face some, uh, legal repercussions of that if they find out it was you. What’s more important? And that’s the question that some of us have to ask ourselves. That’s the question that Edward Snowden asked himself, is this worth it? I know this is going to absolutely ruin my life and up-end everything I’ve ever worked for ever. But the fate of the country is at stake and I’m going to do it. And that’s what’s happening right now with these transcripts and this whistleblower complaint. This could absolutely be the kind of smoking gun that the Democrats need to find. They get Trump out of office once and for all and then possibly even prosecuted after that. Somebody has got to leak it. Cause otherwise Trump’s gonna fight this thing in court until long after he has left office. And by then it won’t even matter. This has to be made public. Somebody has got to leak it because we all need to know what has happened.