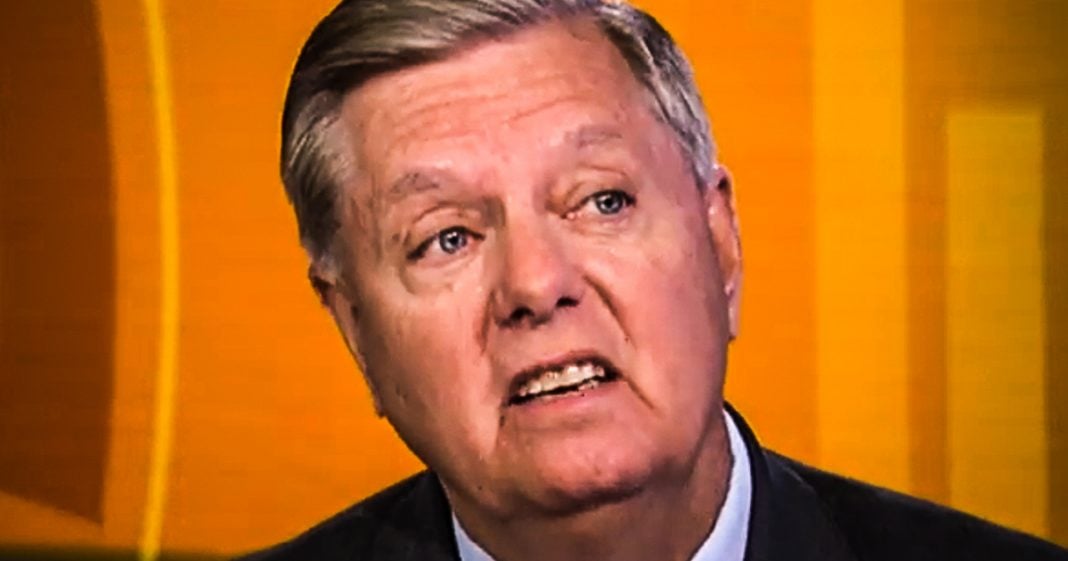 Lindsey Graham absolutely believes that Joe Biden’s son Hunter should be investigated for his Ukraine connections, but he also thinks that the Trump kids should have their records looked at, too. He said as much during a weekend appearance on Fox News, and he’s not wrong on this particular issue. Ring of Fire’s Farron Cousins discusses this.

*This transcript was generated by a third-party transcription software company, so please excuse any typos.
On Sunday during an appearance on Fox News with Maria Bartiromo. Senator Lindsey Graham seemed to suggest that, hey, you know what? We should also be investigating Donald Trump’s children. Now, Lindsay Graham was speaking to Bartiromo about the fact that, yeah, we all know the Hunter Biden’s story. Ukraine, Joe Biden was in charge of Ukraine policy and that should be investigated. They say, and you know what? I’m not against that. I know it’s been looked into, but has it really been investigated? I mean, that is actually the kind of thing that if it were Trump in that position, democrats would be screaming at the top of their lungs that we need to investigate it. So you know when it’s one of our own on the democratic side, I think we need to do the same kind of due diligence, make sure everything’s on the up and up with that. I actually think that’s a good idea, especially if it ends up, you know, exonerating hunter Biden and Joe Biden and all the rest, or if it proves there was some corruption. That’s also the kind of thing we need to know about. We can’t be completely tribal about these things. And believe it or not, Lindsay Graham actually kind of agreed with that because he then admitted after saying all this stuff about Hunter Biden, that may be, we also gotta be looking at the Trump kids to, here’s exactly what he said. He said, you can’t have it one way. You can’t look at one family and not the other. I don’t trust the media to do this. I’m hoping somebody in the Department of Justice will appoint an investigator. Look at all things Ukraine. Like we looked at all things Russia. Now I understand that Lindsey Graham was saying, you can’t look at Trump’s family without looking at Biden’s family, but we didn’t really investigate the Trump kids. Did we? I mean, have we really gotten to the bottom of any of those little secret meetings between Trump’s son-in-law, Jared Cushner and uh, dignitaries from the United Arab Emirates and Eric Prince and all those little meetings he set up for Jared Cushner in the Middle East. That kind of seems like the kind of thing we need to know about. Not to mention Ivanka Trump in all of those Chinese trademarks she got including one according to reports for a voting machine. Hmm. That’s a little odd and we probably need to find out what’s going on there. Uh, Eric Trump and the fact that he stole money from a charity meant for kids with cancer. Pretty sure that hasn’t been fully investigated yet up charging the charity at his own resort so they can extort more money out of them instead of giving it to dying children. Yeah. Again, probably should look into that. And then of course we haven’t even fully investigated Don Jr’s meeting along with Jared Cushner with the Russian lawyer, Natalia Veselinkaia, you know, he claims he swears to assume it’s about adoptions and why the hell would Don jr need to go adopt a Russian child? That makes no sense at all. But because of the obstruction with the Mueller investigation, we didn’t get any clear answers. So I agree with Lindsay Graham on this one particular issue. You can’t look at one family’s kids, Joe Biden’s without looking at the other family’s kids. Donald Trump’s, because I can promise you based on what we already know, any crimes committed by presidential candidates, children, Trump’s kids kind of have a lock on that area of corruption.