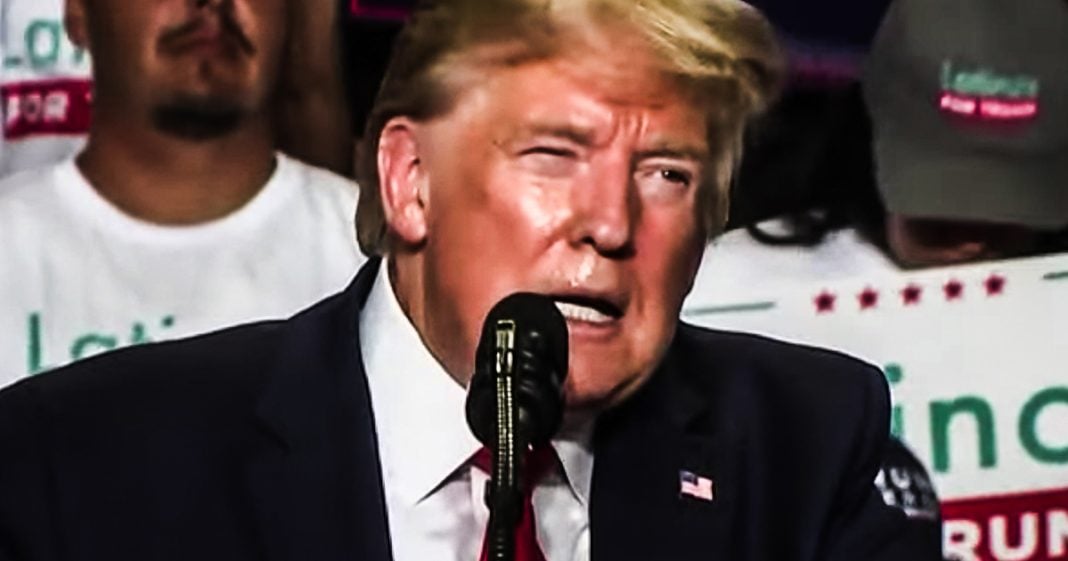 The latest round of polling from Fox News is sure to cause the President more than a few meltdowns. These new polls once again show the President losing the 2020 race to EVERY SINGLE DEMOCRAT polling at the top of the Democratic side. These numbers are even worse than the last Fox News poll in August that caused the President to go on several unhinged rants about Fox News being biased against him. Ring of Fire’s Farron Cousins discusses this.

*This transcript was generated by a third-party transcription software company, so please excuse any typos.
I’m sure we all remember back in August when a Fox news came out with their horrible polling data for Donald Trump, and then that prompted a multi-day meltdown from the president against Fox News claiming that a, there’s something going on there. Well, hopefully the president doesn’t see the latest round of polling for September coming out of Fox News because it’s even worse than the numbers that came out in August. As it stands right now, just like in the August poll, Donald Trump loses to every single democrat who is actually being taken seriously in this race. Joe Biden, Bernie Sanders, Elizabeth Warren, Kamala Harris, all four of them in a nationwide race according to the polls, right this second from Fox News itself, all four of those Democrats win. All four of them beat Trump. Now, here’s what’s different is that the margins have changed and for three of the folks, those margins have grown wider, meaning that today versus a month ago, they would beat Trump by a larger margin than they would a month ago. Now one of those people, the margin fell margin fell by quite a few points, and that’s Kamala Harris because as it stands right now on the Fox News polling, Kamala Harris would only win 42% to Donald Trump’s 40% and if you notice, those numbers don’t quite add up to 100% so there is a hell of a lot of wiggle room there. So Kamala likely wouldn’t beat Donald Trump. As for the other three, their numbers increased. Joe Biden would win with 52% of the vote to Trump’s 38% of the vote. Bernie Sanders would win with 48% of the vote compared to Donald Trump’s 40% of the vote, Elizabeth Warren is 46% of the vote compared to Trump’s 40% of the vote. And now what’s important to remember here is that in all of those, even in the Harris one where he’s only losing by two points, though, he still never broke 40% he never broke 40% now that’s the number we need to pay attention to because these polls are going to continue to fluctuate on this day. Let me just put it to you this way. On this day in September, 2007 Hillary Clinton led Barack Obama in polling. She was the front runner. She was beating him at that time by 33% in September, 2007 by 33% and Obama won the nomination. So again, don’t put a hell of a lot of stock into the who is winning, who is beating, whom. Right now put some stock in the fact that Donald Trump, no matter who he’s up against in these polls, isn’t pulling more than 40% that’s a good sign. And it also shows that as Democrats, we don’t have to play it safe. We don’t have go with the alleged slam dunk Joe Biden first and foremost, because he’s not a slam dunk and he would end up losing to Trump. Kamala Harris would end up losing to Trump. There’s two people running for president that I firmly believe no matter what are going to beat him. And that’s Bernie Sanders and Elizabeth Warren. I don’t think anybody else can do it. I honest to God, don’t think any of the other Democrats running can do it. Bernie and Elizabeth, absolutely could. Nobody else can. Even with Donald Trump having such horrible poll numbers, but this all gets back to the point from the beginning of this video. Trump’s going to have a meltdown. Trump’s going to have several meltdowns. He’s going to have freak outs. He’s going to have Twitter rants. He’s going to have all these insane conspiracy theories about Fox News working against him. When the reality out there is that people simply don’t like him. They’ve grown tired of his shenanigans, tired of his behavior. They’re tired of it. This is a reality show that first of all, never should have been green-lighted, but it should have been canceled before the first season came to an end, and that’s what the American public is feeling right now. And that’s why Trump’s poll numbers are so bad. It’s not because Fox News is conspiring against him. It’s because Donald Trump just sucks.