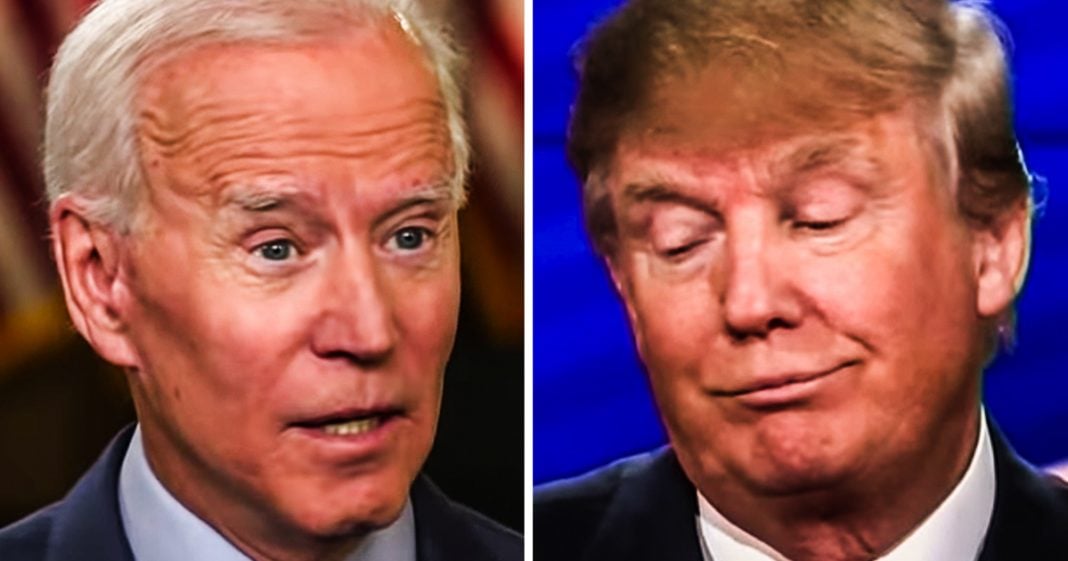 Joe Biden has said some pretty weird and crazy things, not to mention some completely false things, since announcing his 3rd run for the Presidency, and Donald Trump is hoping to capitalize on this by suggesting that Biden is mentally declining. While that may be true, the same has also been said of Trump, and the last thing we need in 2020 is two geriatrics with limited cognitive ability going at each other in a head-to-head matchup. Ring of Fire’s Farron Cousins discusses this.

*This transcript was generated by a third-party transcription software company, so please excuse any typos.
You know a lot of people both left, right center, everybody in between has been kind of talking about Joe Biden’s cognitive faculties. Is He still all there? You know, is something wrong, is something not wrong? What’s going on? Cause Joe Biden has said some really stupid things. He said some really weird things and he said some very false things since announcing he was running for president for the third time. And so yes, people from all sides are wondering what the hell is going on in Joe Biden’s brain. But Donald Trump is also wondering that, which obviously I’ll get to that in a minute is insanely ironic. But here’s what Donald Trump said earlier this week when asked by reporters about Biden in his age and his cognitive faculties said, I met with a man the other day who was 85 years old, the sharpest guy you’ll ever meet. I’ve dealt with people who were 92 93 94 and they were totally sharp. I can’t speak for Biden, I know nothing about it. But he’s given some very strange answers that I can tell you on Twitter over the last few months, Donald Trump has repeatedly questioned Joe Biden’s mental abilities suggesting that Joe is in some kind of cognitive decline and I am inclined to believe that, but not just about Joe Biden also 100% about Donald Trump, and that’s not even necessarily just my opinion of Trump. It’s my opinion of Biden, maybe he’s always been this way. I haven’t paid enough attention. He’s always seemed a little off, but Trump on the other hand has been called out by more than 100 mental health professionals here in the United States. People who devote their lives to identifying the kinds of things that they have identified in Donald Trump. This is the man that is suffering from severe cognitive decline. There could be an actual physical disease in there or it could be some kind of mental illness or according to some, an awful combination of both racking around in his brain right now, but Trump doesn’t care because Trump is an expert at capturing a narrative and ignoring the fact that it also applies to him. Like when he calls out other people for having affairs. He did it just this week with Mark Sanford. He’s done the same thing. But, but he doesn’t care. He’ll still call people out for it. And just when people attack him for doing it, he just ignores it. Same thing with Joe Biden’s mental decline. And if you think that if Joe Biden gets the nomination and Trump’s not gonna make it all about Joe Biden being crazy, you’re wrong. Trump is not afraid to have people call him crazy because he’ll just say he’s not in his base believe it. But if he goes out there and hammers the fact that Joe Biden is slipping, if they run an ad featuring all of Joe Biden’s screw ups and slip ups and corn pop stories, then yeah, Trump is easily going to win because that’s going to turn off moderate voters because Democrats do not have the same kind of media base that Republicans do. They don’t. You know, every time Trump goes out there bragging about how high Fox News ratings are, please understand that that means more republicans are watching garbage than Democrats are watching legit news sources. And yes, folks, that’s a problem. They have the microphones. So no matter how crazy and loony the president is, he can still say the same thing about somebody else with fewer people to call him out on it. And that’s what’s happening now. And that is why Donald Trump and his entire 2020 campaign would wish for nothing more than Joe Biden to be the Democratic nominee. So I’m asking each and every one of you watching this one simple thing, do not grant the president that wish.