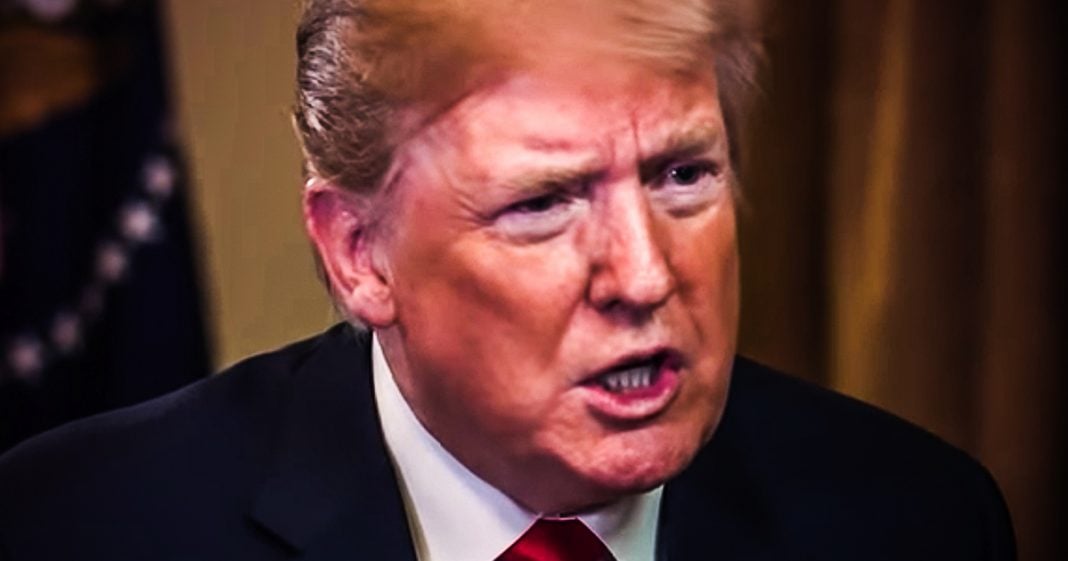 Earlier this week, Donald Trump defended the United States’ relationship with Saudi Arabia by saying that they “pay cash,” and that’s all you need to know about our relationship with the country. In spite of the leadership’s routine violation of basic human rights, the US has always stood by Saudi Arabia because they have money and oil. Ring of Fire’s Farron Cousins discusses this.

*This transcript was generated by a third-party transcription software company, so please excuse any typos.
Donald Trump kind of spilled the beans earlier this week on Tuesday when he was asked by reporters about the United States, a relationship with Saudi Arabia, how that could play into any potential attack on, uh, Iran to maybe avenge our friends in Saudi Arabia and avenge their poor oil that was attacked. Also. Remember, nobody died in any of these attacks by the way. Nobody, just, just some oil. Uh, so yeah, that, that’s something to keep in mind with all of this. But nonetheless, Trump was asked about the relationship of Saudi Arabia and whether, you know, maybe they needed aid from us and Trump said, no, no, Saudi Arabia pays cash. We would certainly help them. They’ve been a great ally. They spent 400 billion in our country over the last number of years. It is daily coach points out. That’s a very odd way to say that they’ve spent 400 billion over the last number of years, almost as if he was some kind of computer program that couldn’t think of the numbers. So they just put the default number in there. And as daily coach also points out that’s not true. You know, last year Trump was touting in arms deal with Saudi Arabia. That was gonna create a 40,000 new jobs here in the United States was going to cost $400 billion, but it didn’t go through. So that didn’t actually happen. But let’s be honest, Saudi Arabia does buy billions of dollars worth of weapons from the United States. They also give us oil. And those are the only two reasons why historically the United States has been such a good friend with this country whose leadership is one of the worst human rights abusers on the planet. Now in Trump’s case, it’s not just because of the weapons in the oil. Also because the Saudis tend to love Donald Trump and his properties. I mean hell, they own the 45th floor of Trump tower in New York. So he personally gets a lot of money and maybe that’s what he was referring to when he said, no, no, they pay cash. Oh, I’m sure they do pay cash for that 45th floor, Donald, because they probably don’t want us knowing where that money’s coming from. So it probably is easier to hand over an unmarked briefcase full of cash to your accountants rather than having to write a check. But nonetheless, he is exposed. The entire relationship we have with these human rights abusers over there at the leadership of Saudi Arabia. I mean, seriously, the treatment of women, the treatment of LGBTQ individuals over there, the treatment of Jamal khaShoggi, all of that. We’re just willing to overlook the bombings, the death they are causing in Yemen, murdering children on a school bus. We’re okay with all of that because as Donald Trump says, they pay cash. They buy our weapons, they give us oil. And as long as you do that, it doesn’t matter how you treat your own citizens or any of your neighbors over there. Oh, you’re, you’re involved in slaughtering tens of thousands of them. Huh? That’s Kinda bad. Oh, I’m sorry. I take that back. I didn’t see this order form for all these new jets you want to buy. Come on bud. Let’s go get a drink. That’s the United States relationship with Saudi Arabia summed up. We don’t care what they do to other people over there as long as they keep buying our weapons and sending us oil.