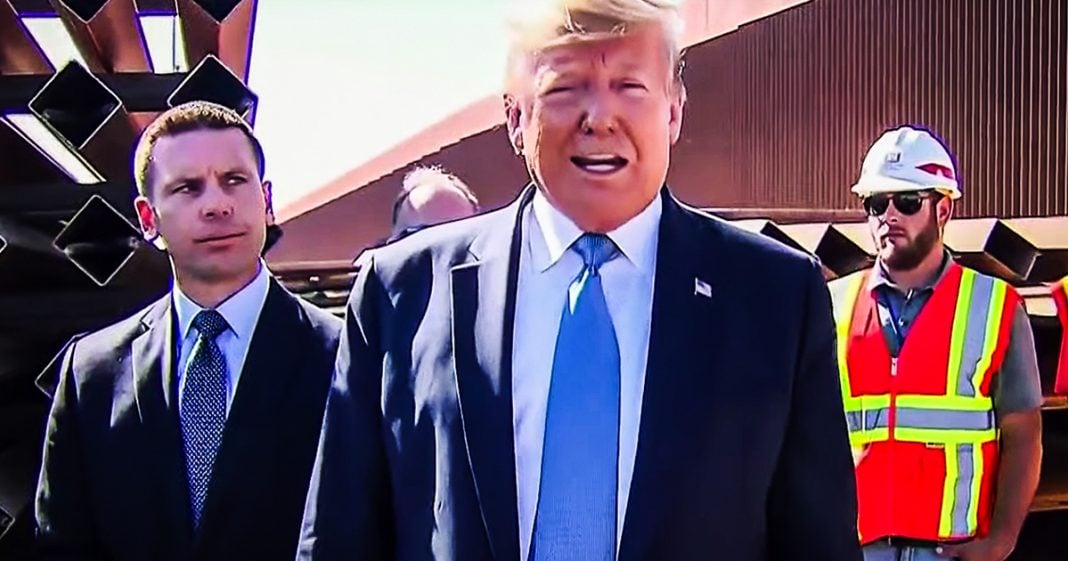 A general with the Army Corps Of Engineers was forced to step in while Trump was talking to reporters about his border wall after Trump revealed what was apparently Top Secret information about his border wall. The general said that the information Trump was talking about has some “merit” to remaining a secret, and Trump awkwardly tried to play off his serious gaffe. Ring of Fire’s Farron Cousins discusses this.

*This transcript was generated by a third-party transcription software company, so please excuse any typos.
Donald Trump spent several days out in the state of California earlier this week, one of those days, he actually spent at day a Silicon Valley Tech CEOs House for a high dollar fundraiser, which of course is ironic because Donald Trump talks about how bad the tech industry is, how bad silicon valley is, and how they’re out to get Republicans and silence them. But sure, he’ll show up at their fundraiser and take their money because the conspiracy theory that they’re trying to silence conservatives is a conspiracy theory. But he also made some time to travel down to his border wall and talk about how awesome that border wall is going to be. And in talking about how awesome it’s going to be, he accidentally revealed some top secret information that he wasn’t supposed to reveal. Here is the exchange between Donald Trump reporters and a very weary lieutenant general from the Army Corp of engineer. Trump told reporters about the wall they’re wired so that we will know if somebody is trying to break through. And then he turned to lieutenant general Todd seminate, chief of the U S Army Corps of Engineers who said, uh, and then Trump said to him, he said, you may want to discuss that a little bit. General. Yeah, it was super proud of as yo wired walls told the general get up here, tell them much good stuff. And the general then said, sir, there could be some merit in not discussing it. Oops. Apparently Donald Trump mentioning that the walls were wired wasn’t something the public was supposed to know about and the general tried as diplomatically as possible to tell him that you shouldn’t have said that dumb ass. But then Trump responded trying to play it cool. Like, okay, I like that. That was a great answer. I’ll just tell you, they’re wired. Okay. They’re wired, they’re technologically very advanced, all set up for cameras. Any place we want. They’re all wired out for drone technology. Anything you want, we have, it’s the rolls were Royce version. So even after poor general seminate is sitting there saying like, dude, like, Eh, cut it out. Cut it out. Stop it. Trump’s like, oh, okay. Y’all totally stop it. We can put cameras on these things. We can get drones on these things. It’s like the Rolls Royce of walls. Wow. You want a TV on it? We’re probably wired for that too. Hell yeah. Watch the Superbowl down here on Donald Trump’s wall. You just spilled government secrets man. And maybe this one’s innocuous, right? Okay. There’s going to be wires in the wall. We’re gonna have cameras along the wall. We’re going to have drones taking off and landing from the wall. Maybe even charging there. Who knows? Okay, that that’s really nothing new. Maybe it could help people want to, you know, crash the wall. Understand that. Okay, first we have to cut the power so they get, that’s bad. They should know that. But here’s the thing. If this man is show willing and able to stupidly reveal something that is a secret to reporters, what the hell else is he revealing to people where he’s talking to on the phone with like what kind of state secrets right now to Sean Hannity? No. Or Lou Dobbs. Cause, I promise you he has at least accidentally revealed classified information to those Fox News hosts, just like he probably has with Kim Jong Un and Vladimir Putin and the Kingdom of Saudi Arabia and Emirates from Qatar. There is no question that this man is an absolute security nightmare because he doesn’t know how to shut up. The government has secrets. Some of those things should not be secrets. They should be revealed like what Edward Snowden has. Snowden revealed other things, you know, like state secrets about spies and stuff. Yeah. You probably need to keep that a little bit secret because whether or not you agree with the government, with some of the things they do, the fact of the matter is some of it is done for national security and nobody else should know about it. If they’re breaking the law, yes, let us know. But if it’s something that involves our safety and security, probably need to keep your trap shut. And that’s not something that Donald Trump is willing and or able to do.