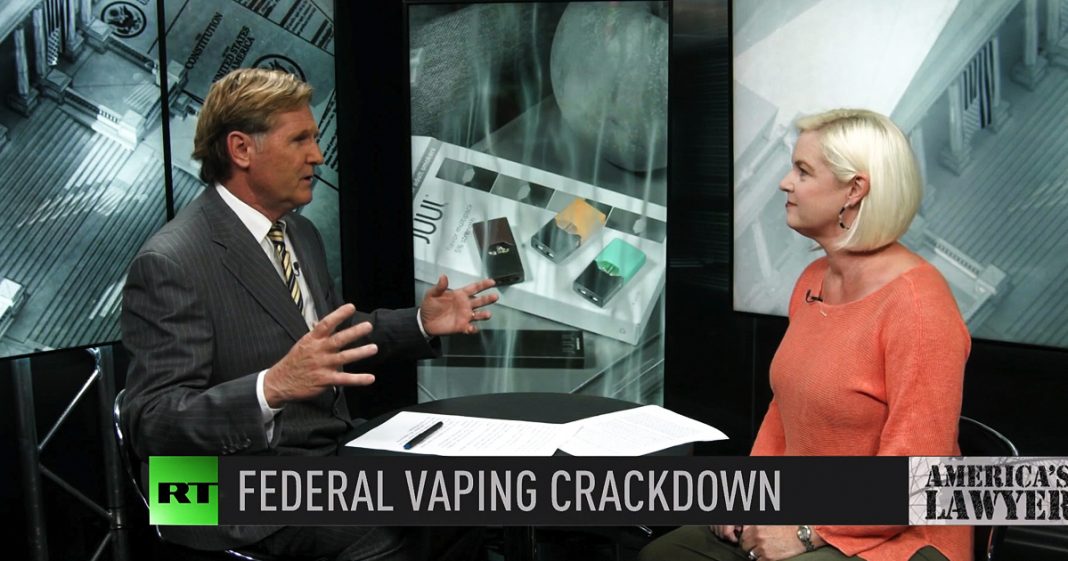 Via America’s Lawyer: Mike Papantonio is joined by legal journalist Mollye Barrows to talk about Trump’s latest push to ban flavored vapes in an effort to curb children and adolescents from being attracted to fruity flavors. Though touted as a “safer” alternative to cigarettes, hundreds of cases of lung disease linked to vaping have been popping up across the country.

Mike Papantonio:             Over the past few years, e-cigarettes have flooded our markets being advertised as the safe alternative to smoking cigarettes. But cases of lung disease and even deaths have begun to surface now prompting president Trump to demand the FDA to finally step in and ban flavored vapes. Legal journalist Mollye Barrows is with me to talk about it. This is a big story. As a matter of fact, there’s major litigation that’s getting ready to start, we’re actually launching that litigation in Las Vegas at the annual meeting that, bi-annual meeting that takes place with, with lawyers who specialize in these kinds of cases. Give me your take on it. It’s an, it’s not an overreaction at all that Trump should go ahead and say these flavored cigarette vapes need to come off the market.

Mollye Barrows:                Right. I agree. I mean, that’s a great reaction. What really needs to be addressed is the marketing rules that need to be tightened up in regards to how these companies like Juul are allowed to deliberately market to children. Because that’s the basis of the litigation that the Levin Papantonio firm is pursuing along with some other law firms, that basically say they took the model from big tobacco and said, we’ve got a product here that we can market as relatively safer than perhaps traditional combustible cigarettes. But we’re going to flavor it and we’re going to make it easily, you know, consumed and appealing to young people. And that’s why you see such a huge market. The Juul company owns the market, dominates the market.

Mike Papantonio:             Right here in this law firm. And so when we saw what they did there, here’s what the tobacco industry was trying to do back then. They did studies and they said, if we can addict a child by the time they’re 14 to our brand of cigarettes.

Mike Papantonio:             Understand, all they’ve done. Now we’re talking about a different product, but it’s the same ghouls that are making these decisions.

Mollye Barrows:                A culture of vaping. For everything that you do, whether you’re socializing or working, you can have it around with you.

Mike Papantonio:             When we, yeah, when we do stories on vaping, the cult comes out because the industry has marketed so well. Now what are the problems that we’re seeing? What, there…

Mollye Barrows:                Well, we’re seeing unexplained deaths. Of course, that’s been the real concern now. You have six deaths so far. You have a number of cases of different types of lung disease that they believe are associated with vaping and because it’s relatively new on the market with the past 10 years, there’s not a lot of research. They don’t know exactly what is causing it if it’s certain chemicals. Because even though it’s been marketed as a safer alternative than combustible cigarettes, you’re still talking about inhaling highly addictive substances like nicotine as well as these other chemicals that are used in the process of delivering that chemical to you. And so those are the problems. Something called popcorn lung.

Mike Papantonio:             Yeah, the, the cigarettes, regular cigarettes may take 30 years, but now we’re seeing we’re actually seeing changes, physical, anatomical changes within the respiratory system that is taking place with people who vape. And so you know, the cult wants to ignore it and say, this isn’t a problem. Okay. Kids are having seizures. They’re developing restrictive airway disease.

Mike Papantonio:             This is diagnosed. This doesn’t take 30 years to develop, and the worst thing about it, the thing that really is the angst here is you actually had the CEO of Juul come out and basically admit, yeah, this, this is a problem. Kids shouldn’t vape.

Mike Papantonio:             At the time he says that, everything he does, contrary to that to market his product.

Mollye Barrows:                Well, so that’s why when the Trump administration says, we’re going to do everything that we can to protect people, especially kids, and we’re going to start by removing flavored vapes off the market. To me that’s just such a, yes, it’s knee jerk. Yes, it’s some sort of a reaction that at least says, hey, what’s happening to our kids is wrong. But again, why can’t we address the route of the problem? Why can’t we get in there and say, hey, it’s our own lawmakers that are affecting and allowing these marketing rules to allow these companies to openly lie like that.

Mike Papantonio:             They’re slowly reacting only because they, again, time after time, the FDA is shamed.

Mike Papantonio:             Ultimately, the FDA gets around to it. In this situation again, they waited too long. No regulations, any mom and pop organization can start a vape store and sell whatever they want to sell. So this story has just begun. After Vegas, there’s going to be some major litigation that takes place here.