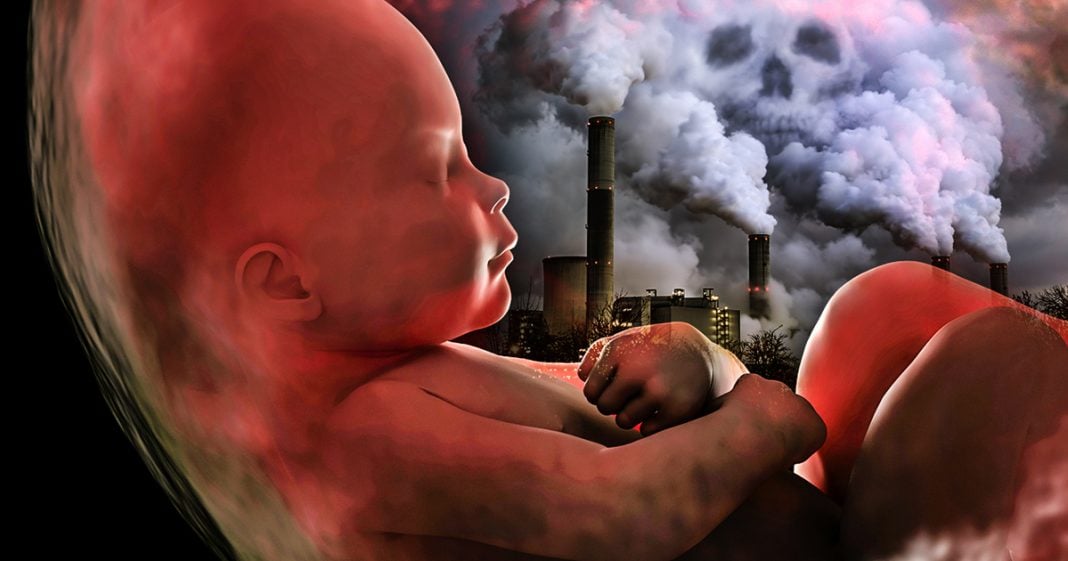 A new study out of Belgium has found that air pollution particulate matter does, in fact, cross the placenta into the bodies of fetuses, a finding that shows the necessity of cutting air pollution across the globe. We are poisoning an entire generation of children who haven’t even been born yet, and yet there’s utter silence from the so-called “pro-life” crowd on this issue. Ring of Fire’s Farron Cousins discusses this.

*This transcript was generated by a third-party transcription software company, so please excuse any typos.
And alarming new study out of the University of Belgium has found that fine particulate matter found in air pollution is actually able to cross the placental barrier barrier into fetuses. Here’s what this study essentially is telling us. It’s telling us that no person on this planet is safe from air pollution. Now in the past, cause this is the first study to ever find this, it was believed that a fetus was protected from what the mother breathes in to a certain extent, certainly fine particulate matter found in air pollution wasn’t going to cross that placental barrier and make its way into the fetus. Well, after studying placentas, these researchers said, oh, this thing’s filled with particulate matter and it’s on the fetal side of it, so it made it through. After examining the bodies of a miscarriage children and their placentas, some even just 12 weeks. they found the same thing. Particulate matter in the placenta and in the fetus. We have known for several years now that these fine particulates also can penetrate the blood brain barrier and essentially, in fact, in effect every single organ system in the human body at any age. That’s what we’re doing to ourselves. And here in the United States, Donald Trump is actually making our air dirtier. he, he’s trying to resend the, a waiver for California so that they can’t make their vehicles a little bit cleaner. Nope, no cleaner for you. He’s repealed Obama’s clean power rule, which is going to lead to roughly 1300 new deaths per year, and they don’t care. They don’t care. This allegedly pro-life Republican party, they don’t care that we’re out there damaging fetuses causing heart problems, miscarriages, low birth weights, and every other kind of problem a fetus can encounter because they don’t care about air pollution. You know, abortion by corporation, totally fine for the pro lifers out there, but a woman gets raped and makes the choice to end the pregnancy of the rape baby. Nope, that’s, you’re going to hell for that. But a corporation spews out some, uh, you know, black carbon out there and pro-lifers just sit there. Oh Wow. I guess that’s God’s plan. Maybe the mother shouldn’t have been breathing so much. Maybe it’s her fault. This is insane, folks. We’re killing people across the globe because of our addiction to fossil fuels. That’s what this is. We know the problem is there. We know who is causing it. We know what the effects are, and yet here we are acting like our hands are tied. Like we can’t do anything about it. Or even worse when we have these charlatans in the Republican Party here in the United States standing up and saying, no, there’s no evidence of this. Get that. Get that science out of here. I don’t want to see it. I’m just gonna take the fossil fuel industries word that everything is great. Everything is fine. And by the way, make sure you have me that check by the end of the week. It’s paid ignorance folks. And it’s ignorance that is getting, people have quite literally every age killed every day in the United States.