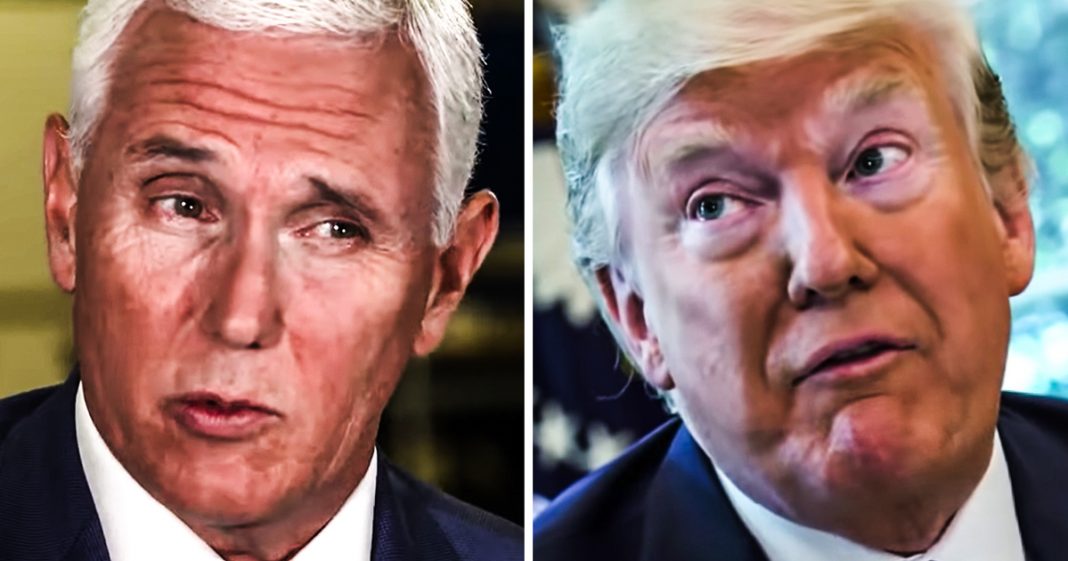 According to new reports, Donald Trump still has not ruled out replacing Mike Pence as his running mate for the 2020 Presidential election. Vanity Fair’s Gabriel Sherman says that sources inside the White House say Trump is growing increasingly annoyed with Pence’s lack of loyalty and the fact that Pence is not defending Trump enough. Ring of Fire’s Farron Cousins explains what’s happening.

*This transcript was generated by a third-party transcription software company, so please excuse any typos.
Well folks, another week, another story about Donald Trump being unhappy with Mike pence and possibly replacing him on the 2020 ticket. This one though comes from Vanity Fair’s Gabriel Sherman, who actually regularly speaks with Republicans inside the White House and his sources inside the White House who’ve been pretty spot on since the beginning of this administration are telling him that yes, this is happening. There is still talk of replacing Mike Pence on the 2020 ballot. And one of the reasons is because Donald Trump feels like Mitch mcuh, not Mitch McConnell. Mike Pence is not defending him enough even though Mike Pence is always out there trying to defend this idiotic president for Donald Trump. That’s still not enough. I mean, Mike Pence has sold whatever phony Christian values he pretended to have in order to defend Donald Trump and everything about him. So I guess that’s still not good enough for Donald Trump. Maybe he wants Pence to rip out one of his own kidneys and hand it to him. Maybe then that would show Donald that Mike truly is loyal. And I swear to God, if, if Trump asked Pence to do that, he would probably do it without hesitation. That’s the disgusting part of it. Mike Pence is 100% a very loyal little lapdog. But even that’s not good enough for Trump. And there’s another thing that Sherman says is happening behind the scenes, and this is something others have also reported on, and that is that Ivanka Trump and Jared Cushner are unhappy that Mike Pence is, will hard to get along with, doesn’t want to always go along with their plans, doesn’t always want to do what they have to say. So allegedly Cushner and Ivanka on a weekly basis, according to the report, are threatening Mike Penn’s that they’re just going to replace him on the 2020 ticket because he’s not playing ball. So that’s good to know. Not that they’re threatening him on a weekly basis, but that Jared Kushner and Ivanka Trump are both kindergartners because that’s exactly the mentality that a five or six year old in this country would have, or at least a very bratty and spoiled five or six year old. They would have that kind of mentality. But that’s exactly what Cushner and Ivanka are. They’re bratty little children who have been used to being handed everything they’ve ever asked for in life. They always get their way and they don’t like people telling them no, and so they threatened them, which is what’s happening here with Mike Pence allegedly. Here’s the thing, I think getting rid of pence would be a huge mistake for the Trump administration because that is the only connection to the religious right that you have. And even though there truly is nothing religious about Mike Pence, he pretends to be, he’s gone. I’m fooled. He’s got himself fooled because I do believe that he believes he is a Christian and that’s good enough for the religious right who thinks that it’s better to just blindly obey than it is question things. But if he cuts Pence loose, suddenly you’re left with uh philandering twice divorced scumbag who has no connection to religion anywhere in this country. And it’s actually kind of shocking. Why doesn’t the religious right ever ask, where do you go to church? Honestly, like just that simple question, Donald Trump, when are you going to church? What time does church hell, what day of the week is church? He couldn’t answer any of those because he doesn’t know. He doesn’t worship a god. He worships himself. Any worships his bank account. But by holding on to a scared creepy little Mike Pence, he gets to present himself as some kind of evangelical. You cut Pence loose, you could easily lose all of that support, not trying to defend Pence here by any stretch of the imagination. He is a horrible human being and he better hope he’s wrong about religion because if he’s not, he’s going to burn for all of eternity. But he brings something to the table that Trump sorely needs if he wants to win in the Republican Party. And if you get rid of that, your chances of reelection in 2020 just got a heck of a lot lower.