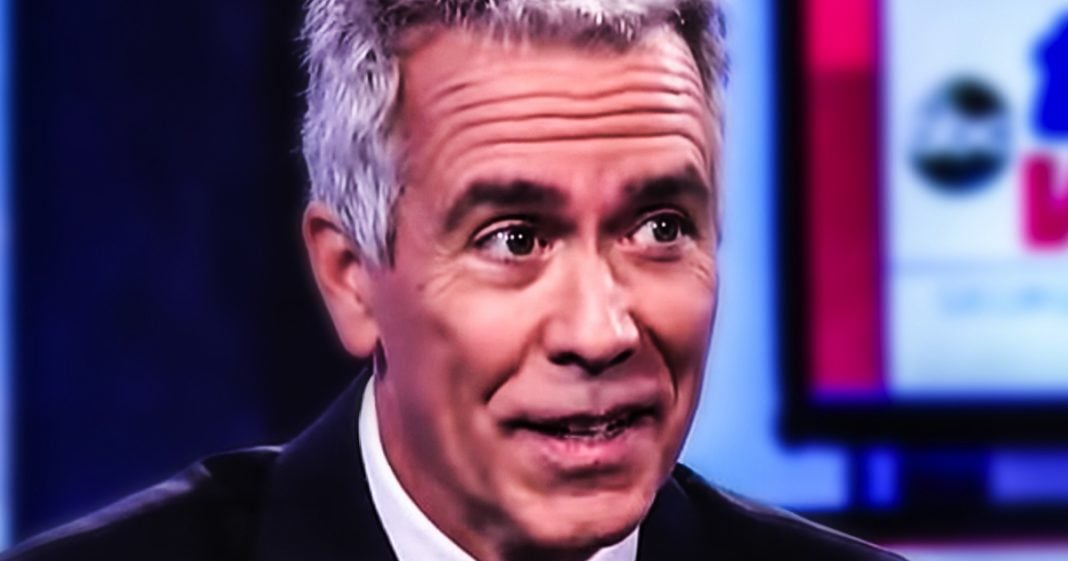 Former Representative Joe Walsh described the Republican Party as a cult after several states took steps to cancel their Republican primaries for 2020. Walsh is challenging Trump for the Republican nomination, and although he’s admitted that he likes his policies, he says that we have to return to a sense of decency in the White House. Ring of Fire’s Farron Cousins explains what’s happening.

*This transcript was generated by a third-party transcription software company, so please excuse any typos.
On Monday on CNN, former Republican Representative Joe Walsh, who is now challenging Donald Trump in the 2020 republican primary said that the Republican Party of today has become a cult and they’re all about quote, washing their leader’s feet every day. Joe Walsh is absolutely 100% correct with his analysis of today’s Republican Party, and it’s not just about the voters in the Republican Party because Joe Walsh here was actually calling out the leadership of both the National Republican Party and the State Republican parties because Walsh is furious over the fact that you have states, a Nevada, Kansas, South Carolina that are actually canceling their Republican primaries for 2020 leaving people like Walsh and, uh, Bill Weld and Mark Sanford with virtually no chance of being able to get votes to be on the ballot in place of Donald Trump. Here’s the thing though, while I do agree that it is wrong for these states to do this, just as I think it would be wrong if they were doing it to a Democrat with democratic challengers, here’s the thing. Joe Walsh is not seriously running for president. Bill Weld is not seriously running for president. Mark Sanford is not seriously running for president. If they were, these challenges would have taken place at the beginning of this year. They would have gone out there and gotten to know voters and not wait until late August, early September to finally say, whew, I’m going to go ahead and run for president against Donald Trump today. Let’s see how that works out for us. Yeah, I’ll be back by noon. No, you didn’t fund raise. You don’t even have enough time to travel to all of the places you have to travel and you don’t even have enough time to make a good logo for your campaign. You’re not seriously running. You want to run in the future though. That’s what this is about. You want to get out there and get your name known. Go out there. Act like you never supported Trump to begin with. Apologize if you did support Trump, but also make it clear as Joe Walsh has done that you support every policy this president’s ever put in place. Your only beef with him is his personality. You love what he’s done. Those cages on the southern border. Beautiful with those children or that wall idea. Heck yeah. Let’s build at 10 feet higher than even what Donald Trump said war with Iran. Cha. You betcha. Crashing the economy with the tariffs. Not a problem for Joe Walsh. The only thing he doesn’t like is the way Donald Trump is. Everything else is totally okay. Same goes for Bill Weld. Same goes from Mark Sanford. Same goes for any other Republican out there saying, I’m a never Trump republican because I just don’t like the way he acts. No, he acts like the rest of you would act if you had no outward class. Don’t get me wrong, you all have no class, but you’re able to present yourself as if you do. Trump can’t do that. I mean, if it wasn’t for the upbringing, Donald Trump would probably be living in a trailer somewhere, but instead he’s living in the White House. But that’s what Trump is. Trump, Trump’s white trash and that’s what you Republicans don’t like because he says the quiet parts loud. He’s overt with it, not covert. That’s why Joe Walsh is mounting this little challenge that has zero chance of success, but Joe Walsh is gonna get his name known. Joe Walsh is going to be in the media. Joe Walsh is going to be talked about, and that is going to put Joe Walsh in a very good position to run against whatever incumbent Democrat is running in 2024.