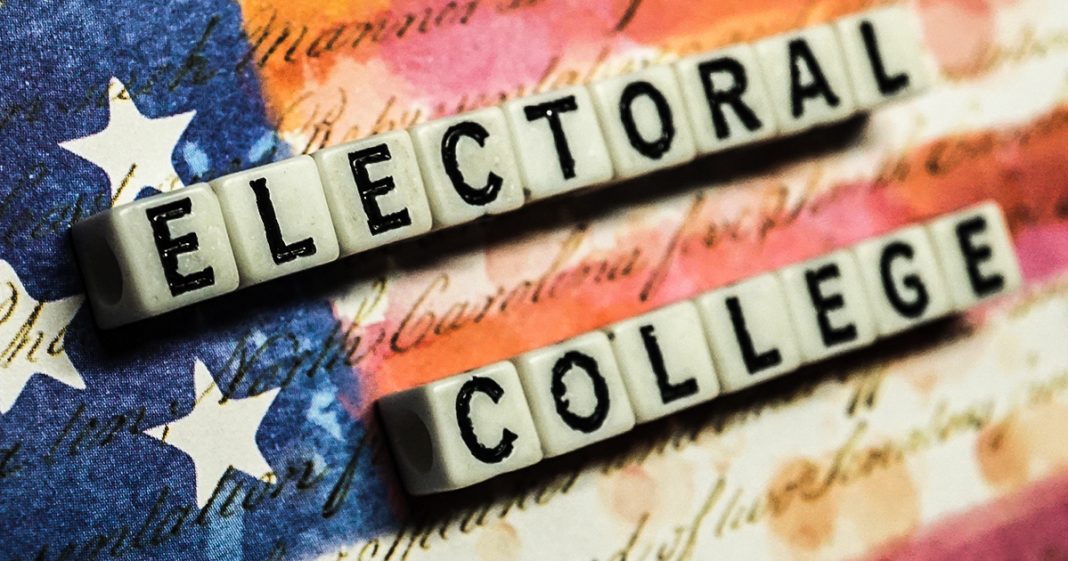 Researchers at the University of Texas at Austin have been looking at the numbers for a while now, and they’ve concluded that the electoral college can absolutely help put unpopular Republicans in office at a higher rate than it could Democrats. The system is rigged, and this study proves that, and it also explains why Republicans are so hellbent on keeping this archaic system in place. Ring of Fire’s Farron Cousins discusses this.

*This transcript was generated by a third-party transcription software company, so please excuse any typos.
In recent months, we’ve seen a lot of republicans come out trying to defend the electoral college is more and more Democrats come out saying that we need to get rid of this archaic system that is clearly rigged to benefit one party over the other, and according to a new study by the University of Texas at Austin, that is 100% the case researchers at the University of Texas at Austin went through polling data and created for the last 30 years of elections, all sorts of different hypothetical match-ups and races, elections and outcomes multiple for every single possible scenario. And what they found in each and every one of these scenarios is that when the election is close, the electoral college always gives the advantage to the Republicans. Here is how slate explains some of the findings from this report. A Republican who earned 49% of the two party popular vote could expect to win the Electoral College about 27% of the time. A Democrat with that share of the vote would have just an 11% chance of winning at 49 and a half percent of the popular vote. A Republican would have enjoyed a 46% probability of walking away with the presidency versus a 21% chance for the Democrat in a photo finish where the two parties split the vote, about 50 50 Republican would have had a 65% chance of spending the next four years in the Oval Office. So even when it’s neck and neck, if the vote totals were relatively even, even though the Democrats would have a slight edge on the popular vote, the electoral college would do what researchers call inversion and give the election, give the White House to the loser of the popular vote. Which in these instances was the Republicans. Three Republicans have won the presidency since the year 2000 George W. Bush was two of them. Donald Trump was one of them and only one of those elections did that Republican win the popular vote. So there’s only been one legitimate republican president in the 21st century, but that’s only because he was the incumbent after the electoral college installed him in the year 2000 the 2000 election. The electoral college is absolute garbage and unfortunately this is the kind of thing that was designed to do, not to protect us necessarily from people like Donald Trump. Sure. On paper, that’s, that’s what it means, but what it was really done or why it was really created was to prevent slaves and former slaves from rising up growing too populous and electing the person they felt would protect them rather than the interests of, well, a white, wealthy landowners that that’s why this thing exists. Folks, go back and look at the history. Look at what some of the smartest people in this country have written about and how they’ve explained it and that is exactly what you’re going to find and yet still we have republicans out there and some really stupid centrist Democrat commentators out there trying to defend this thing saying, oh, this is nonsense. If we get rid of the electoral college, candidates are going to ignore certain states. Um, I don’t know if you guys are smart enough to do research. I assume you’re not, but how about your Google state’s not visited by presidential candidates and then type in the election year after that? It’s gonna shock you because I’ve done it, unfortunately, I can’t remember off the top of my head, which states were not visited in 2016 but I know it was at least three or four of them, maybe even five. So the argument that, oh, they’ll just ignore certain states. They’re doing that now. Idiots. They’re doing it now. They’re ignoring certain states. And that’s ridiculous. Oh, suddenly, 200,000 people in Wyoming, instead of being worth only three electoral college votes, they’re worth 200,000 popular votes. That’s what abolishing the electoral college does. It makes Wyoming in play. It makes California in play for Republicans. It makes Texas in play for the Democrats. And maybe just maybe it stops Florida from being the biggest swing state in the country. If it’s always about even right. Instead of buying over 27 votes, you’re splitting each right couple million here, a couple million there, and then you move on. We get rid of the entire swing state idea and we put it back to the people and it’s very hard to get rid of the electoral college. Obviously. That’s the way this is designed. We are not a true democracy. We are a democratic republic, and that’s just kind of stupid, but we can’t change that yet. Maybe someday we will. Maybe someday, maybe when the first Democrat in modern times gets elected without the popular vote, but with the electoral vote, Oh, you can bet your ass that Republicans will be working on abolishing the electoral college the very next day.