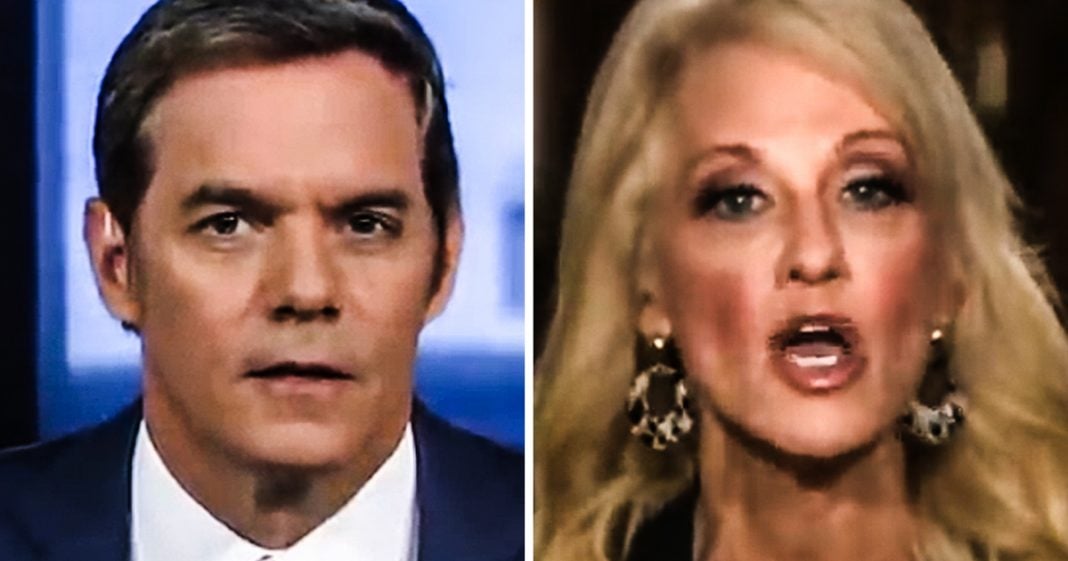 During her recent appearance on Fox News Sunday, Kellyanne Conway made the alarming admission that Donald Trump and his team don’t actually analyze or study situations before they make their decisions. In other words, the President and his cabinet aren’t thinking about things before they do them. Conway believes that this is what makes Trump great, but it is likely what is causing our country to go down the tubes. Ring of Fire’s Farron Cousins discusses this.

*This transcript was generated by a third-party transcription software company, so please excuse any typos.
During her recent appearance on Fox News Sunday, Kellyanne Conway let the cat out of the bag about why the Trump administration is actually so incredibly terrible for the United States. Now in the context that Kellyanne Conway was speaking, I’m going to read her quote in just a second, but I got to give the context first. She was talking about the Trump administration’s decision basically to immediately say that we’re locked and loaded and we’re ready to go attack Iran after the oil sites in Saudi Arabia were attacked. Now here’s the thing. This is what she had to say. She said, “this is why it’s so important to have a president who isn’t a typical politician because he and his team don’t sit around and say, well, let’s study it. Let’s have a commission about it. Just go out there and do stuff.” That’s what Kellyanne Conway tells us is the greatest strength of both Donald Trump and the rest of his administration because they don’t think, and I dunno about you, but that is exactly what I want in a president, right? A guy that doesn’t ever take the time to sit and rationally think about something. He just goes out and does crazy stuff every day. That’s what this country has been waiting for. Yeah. Too much of that reserved Obama like, well, wait a minute. Let’s think about this. Let’s look at this. Let’s research it. Let’s use our brains for a minute. No, it’s so good to put our brains away for four years and just let Donald Trump with his a toddler mentality and temperament come out here and just say, Woo, go into war. All right, let’s do it. But that’s what we’re dealing with. And again, I pointed out the context of that Kellyanne Conway was talking about the attacks in Saudi Arabia because I think it goes well beyond that. I think it also applies to things like, oh, I don’t know, the tariffs. Trump didn’t really consider the damage those would do to the United States. He still is denying publicly that it’s causing damage to the United States. He just did it cause he wanted to. There were no impact studies done. There were no consultations, there was no meeting of all the advisors in little commissions form to figure out how bad the damage would be to America’s farmers in America’s Manufacturing Corp. Nope. He just did it because he was mad at China and now he keeps escalating it cause he’s still mad at China. He’s ignoring the advice of his aides because as Kellyanne Conway points out and he doesn’t think he just does it, um, that’s an illness. That’s, that’s not exactly something that you should be out there. One bragging about. And two, even admitting is a thing. Donald Trump is a dangerous human being and he’s a dangerous human being because he is not smart. He has skills. I’ll give him that. He is an absolutely phenomenal con man. He one 100% is, but that doesn’t mean he’s smart. He’s good at a thing. he sucks at business. He’s got enough bankruptcies to prove that. But he sucks. Even worse at being the president of the United States and Kellyanne Conway absolutely hit it on the head. It’s because the man is incapable of sitting down, calming down and developing rational thoughts. And plans in his brain. He would rather act like a whiny, colicky child throwing a temper tantrum. Just do whatever the hell he wants without ever once considering the consequences.