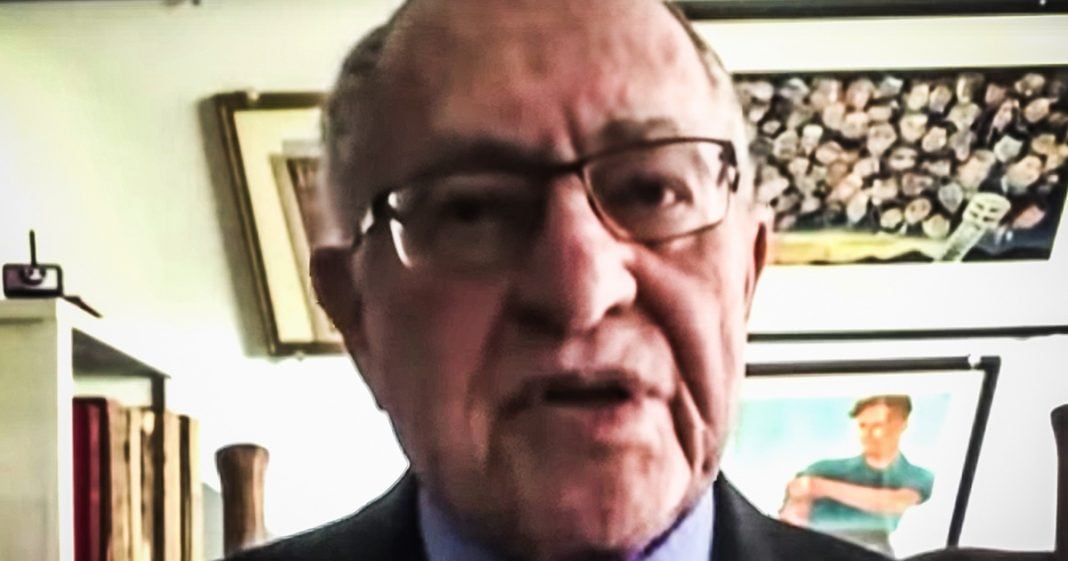 Alan Dershowitz doesn’t appear to be a big fan of law and order, as he recently went on TV and complained about the fact that so many political leaders are being subjected to criminal prosecution. Shouldn’t he be angry about the fact that so many of our leaders are committing crimes? Doesn’t that seem like the bigger problem here? Ring of Fire’s Farron Cousins discusses this.

*This transcript was generated by a third-party transcription software company, so please excuse any typos.
Alan Dershowitz, the a famed attorney of Jeffrey Epstein during his first trial, uh, isn’t happy about the fact that politicians and government officials in this country are being criminally prosecuted for potential law breaking done by those politicians. Dershowitz’s sick of it. He’s tired of investigations. He’s tired of people being prosecuted. He just wants it all to end. He told a New York City radio station last week, the following, he said, uh, I don’t like the criminalization of political differences. What McCabe did is very questionable, but did he cross the line into criminality? I just haven’t seen the case made for that. I would like to see us pull back on using the criminal law against political figures. Who One disagrees with, I didn’t like it when they went after Hillary Clinton. I didn’t like it when they went after president Trump. I didn’t like it when they went after the people in the FBI. I think we overuse the criminal law. Now. Here’s what I think Mr Dershowitz, I think we have too many people, high profile people in positions of power breaking the law. Now, look, I’m going to agree with you. I don’t think what Andrew McCabe did was technically illegal. He had contacts in the media or you can make the case easily for that being unethical, you know, too. Yeah. Stretch it out in a criminal prosecution is absolutely ridiculous, but they’re not already prosecuting him. They’re basically launching a massive investigation. They do want to prosecute him and they will take that step probably within a couple of weeks. But that’s how the system plays out. And Yeah, nobody likes this, you know, political, uh, targeting of other folks. But let’s be honest, not all of it is political targeting. What happened with Hillary Clinton that did need to be investigated? Did it warrant several years of investigations and congressional hearings and all that? Absolutely not. But things did emerge that the public needed to know about facts were revealed and that’s a good thing. You know, a little bit of transparency. Same thing with the Mueller investigation did Trump get indicted for any of it. Nope. And the talk about it has died down significantly since then because now we know, I mean, we know most of it, let’s be perfectly honest. Mueller himself admitted in the report that, yeah, you know, there was enough obstruction coming from this administration. They lied so much that I couldn’t reach the conclusion, but nonetheless, here it is and we learned all about the election interference and things like that and a lot of people went to jail and they confiscated more money than they ended up spending. So hell, the US made money on that investigation. That’s a good investment if you ask me. Right. As for McCabe, yeah, sure. We need to look into, we need to find out what’s going on with these intelligence communities. What kind of information they’re feeding the press and is it accurate or not? Or are they trying to manipulate the US media to give them more positive or favorable coverage? Those are things we need to know, but Dershowitz’s out here acting like every single prosecution and investigation is purely political motivated. It’s not folks. There is a lot of really horrible people in the United States government, the house, the Senate, the White House, the FBI, the CIA, the DOJ, the EPA, the FDA, OSHA, the department of Education, HUD. All of it. Real bad people in every possible nook and cranny of this administration and of the government itself left and right. And they do need to be investigated. We need to root them out. We need to weed them out. We need to get rid of them so that the government can function properly. And just because it happens to be somebody you agree with doesn’t always mean that that person is completely innocent. If they broke the law, they’re no friend of yours, they’re no ally of yours. So let the system play itself out. And if they didn’t do anything wrong, eventually it’s going to exonerate them. Whether it exonerates them in the eyes of the public is a completely different thing. But in the eyes of the law, let the process play itself out so that we can put some of these issues to rest.