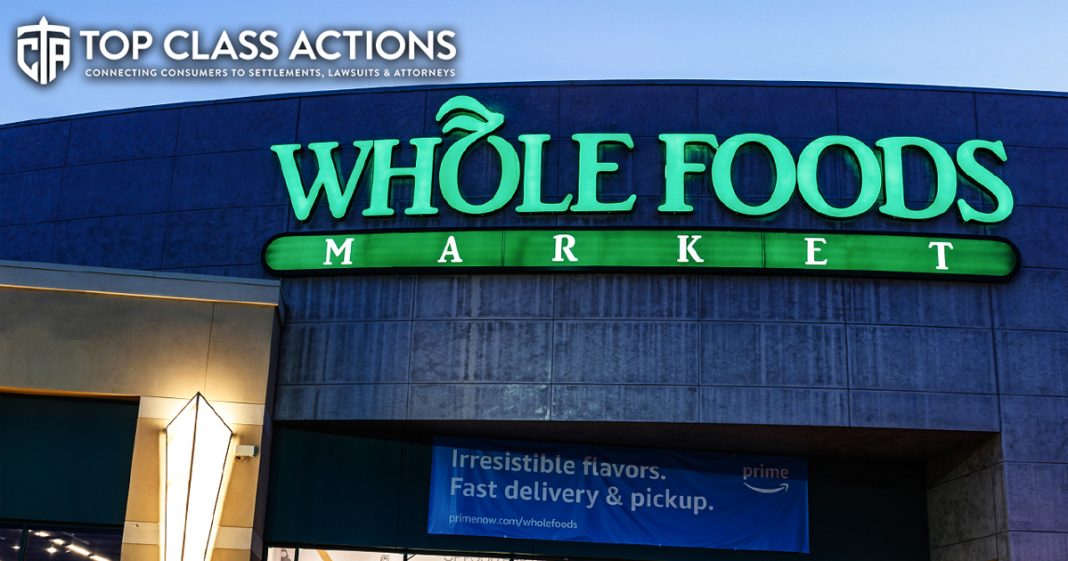 A class action has been filed against Whole Foods by consumers who claim that the company’s brand of bottled water, “Starkey Water,” is contaminated with arsenic. Plaintiffs David Berke, Lorenzo Colucci, and Vienne Colucci say that even though Whole Foods touts its water as “Protected, Pure, Unique” and “Untouched by surface contamination,” the water contains the poisonous chemical. Ring of Fire’s Farron Cousins discusses this with Scott Hardy from Top Class Actions.

Farron Cousins:                  We’ve talked a lot on this program about the fact that a lot of products out there, food products, have things in them that most consumers are not aware of. And at this point we’ve almost come to expect that any kind of processed food that you buy is going to have a few things in there that either you didn’t know were in there or maybe you don’t want them in there. But bottled water typically not something we think is going to contain any kind of impurities. But unfortunately that is exactly what we’re finding right now with the Starkey Water sold at Whole Foods.

And I have Scott Hardy from Top Class Actions with me now to tell us what’s happening. And Scott, lots of things can be in water, but we assume water, bottled, that we purchase at a store, especially a store like Whole Foods, this stuff’s gotta be totally pure. Right? There, there’s no deadly chemicals lurking in this water is there?

Why can’t this premium brand, Starkey bottled water at Whole Foods, which is a brand a lot of people trust, unable to wipe arsenic out of their water? What are they doing? They’ve known about this since at least 2016 but it appears that they’re not doing anything about it and that is a major problem.

Farron Cousins:                  And one of the worst parts too, is that they’re sitting there, you know, marketing this as protected, pure, unique, untouched by surface contamination. Unless of course you count all the arsenic that’s in this bottled water. And as you pointed out, there’s lots of other brands of bottled water that in fact do not contain any detectable levels of arsenic and yet this one that’s touting itself as, you know, it’s pure, it’s great. Our carbon dating puts it at, you know, roughly 16,000 years old. That’s great for marketing purposes. But what are you doing about this health problem that you’re now creating with people who don’t want to drink tap water because they’re afraid it’s also contaminated?

I mean, we have done plenty of stories here about how bad tap water is across the United States. We’ve got more than 2000 water systems that actually have levels of lead worse than what’s in Flint, Michigan. So yeah, more and more people turn to bottled water because we’re, we’re assuming this is better, it’s safer, it’s been filtered, we don’t have to worry about it. And now we gotta worry about that too.

Scott Hardy:                          Exactly, and that’s the thing about the, these tests that we’re seeing here is that we see samples of their water going from 9.48 to 9.86 parts per billion of arsenic, which is just under the limit of 10 parts per billion. While a fourth sample, oh, it was over it at 10.1 parts per billion. So they’ve got the, there, there’s absolutely some arsenic in this, in this water that they’re selling. And then it depends on which bottle you get. Maybe you’ll be below the federal limit, maybe you’ll be over. But it’s really sad that they’re selling this water at a premium price to people when there are a hundred and more than 120 bottles, more than 120 other brands of bottled water that contain no discernible amount of arsenic. So it’s possible, but Starkey and Whole Foods just aren’t doing it.

So if you’ve got somebody who’s drinking five, six bottles of this every day, you could be looking at people who have been going around feeling a little off, maybe a little queasy, nauseous little ill for weeks without even realizing maybe it’s the water that you’re drinking all day.

Farron Cousins:                  Exactly. They’re either going to have to switch the source, come up with better filtration methods to get this out of there, but either way, you can’t keep selling consumers arsenic tainted water. And if this happens to be a water that you love and you drink and you buy plenty of, please make sure you do follow the link in the description of this video, head over to Top Class Actions, get all the information you need about this issue, and make sure you sign up for their weekly newsletter. Absolutely one of the best resources out there for American consumers. Scott Hardy with Top Class Actions. Thank you very much for talking with us today.