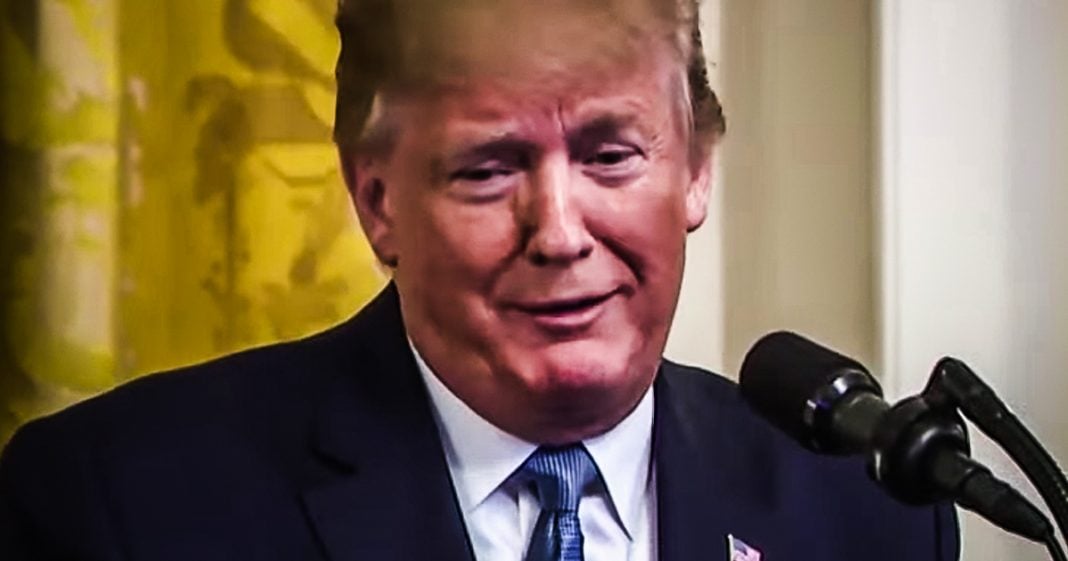 In a truly bizarre court argument, lawyers for Donald Trump claim that the President is 100% immune from any and all investigations, prosecutions, indictments, and any other legal problem that a human being could possibly run into. In short, they are arguing that the President is above the law and can do whatever the hell he wants to do. Ring of Fire’s Farron Cousins discusses this.

*This transcript was generated by a third-party transcription software company, so please excuse any typos.
On Thursday morning, Donald Trump’s lawyers filed a lawsuit against Manhattan prosecutor Cyrus Vance for the, uh, investigation that’s taking place in the Manhattan District Attorney’s office in to Donald Trump and the Trump organization. And the money is they paid to Michael Cohen who paid off Stormy Daniels and possibly Karen McDougal. And they want to know exactly what’s going on. So as we mentioned earlier this week, they subpoenaed eight years worth of Donald Trump and the Trump organization’s tax returns. Well, as we predicted, Trump’s lawyers filed suit to stop the release of those tax returns. And in their 20 page filing, they argued that the president of the United States is above the law. Here’s specifically what they said. This was word for word from the complaint itself, nor can he be investigated, indicted or otherwise subjected to the criminal process. In other words, Donald Trump, president of the United States is above the law. Now, here’s the weird thing about this. They’re arguing that as president, he can’t even be investigated, let alone prosecuted, indicted or thrown in jail. But they also said in this filing that they are representing him as a citizen, as a private citizen of the United States, not as the president. So president Trump, who they are not representing, can’t be prosecuted under their argument. Citizen Trump, who they do say they’re representing can because that’s the thing. You’re both, you’re both of those things. It’s like Bruce Wayne and Batman. You’re still the same person. Donald Trump is president. Yes. Donald Trump is private citizen. Yes, private citizen can be prosecuted, but according to these scumbag lawyers, president can’t. And what’s even worse is that in their filing, they also cited a 2009 article from Brett Kavanaugh saying, no, you can’t. You can’t prosecute a president while he’s in office, but you can after he leaves office. So let’s deal with the two things here. First and foremost. Yeah, you can. You can. Yeah. They said a special prosecutor, the DOJ shouldn’t not, couldn’t, but shouldn’t indict a sitting president. And that’s what kind of guided the Mueller investigation. It says nothing of state prosecutors says nothing of any other prosecutors in this country or investigators or law enforcement agencies, they can and they will and going to be held up in court. As I mentioned earlier this week, there’s a grand jury involved in this one. So Trump’s lawyers ain’t going to get very far, especially trying to argue that nope, the president can break the law, he can do whatever he wants. They also have to understand that, okay, suppose suppose they’re successful. I don’t think that’s going to happen, but let’s just pretend we live in fantasy world with them and that they are successful and the judges say, nope, can’t prosecute a sitting president. Okay, he’s likely not going to be president in a year and a half. Then what? Then you got nothing. You got nothing. So maybe we have to wait a year and a half for Donald Trump to become a fully private citizen anymore. Uh, again with the title former president of the United States. And then that investigation is going to go full steam ahead and there is literally nothing you could do to stop it. Maybe that’s what should happen. Maybe lull Trump into this false sense of security. And then the day he steps out of office when the new president gets inaugurated, hopefully on January 20th, 2021 right at noon, that as soon as that new president puts his hand on that Bible lifts the other arms, says those words that a police officer standing right behind Donald Trump with a pair of handcuffs ready to take him away. Trump’s lawyers may think that they’re winning, but at best they’re proving what incompetent buffoons they truly are. And at worst, they’re postponing it for maybe about a year and a half, and then all hell is going to break loose. And there is literally, again, nothing they’ll be able to do to stop it.