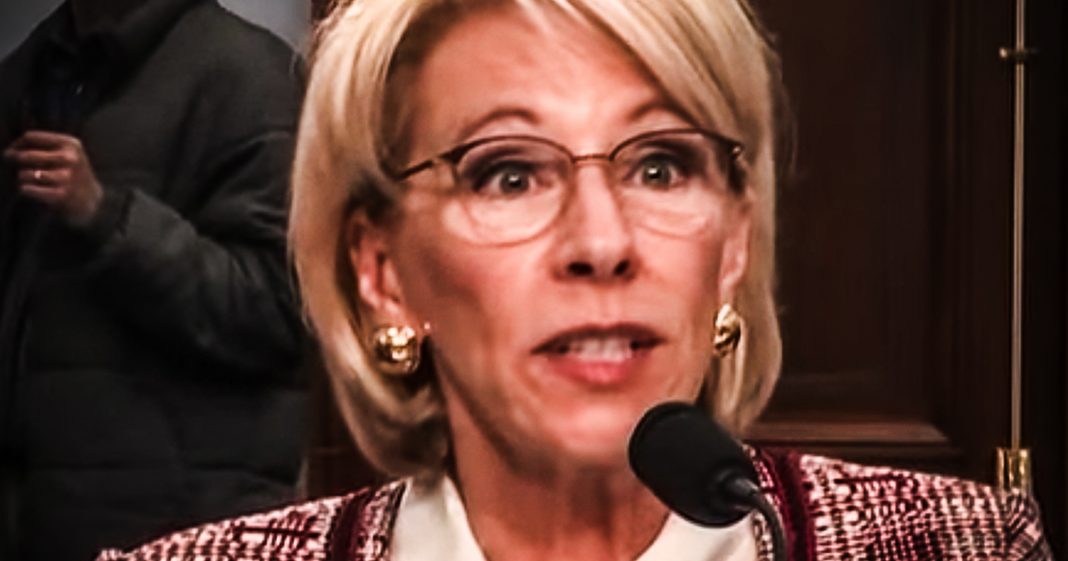 Donald Trump swears that he doesn’t discriminate against anyone, but the actions of his administration say otherwise. The Department of Education, headed by Betsy DeVos, has warned Duke and UNC that they will cut funding for the colleges if they don’t stop portraying Islam in a positive way. This is a disgusting move by this administration, but sadly, not all that shocking. Ring of Fire’s Farron Cousins discusses this.

*This transcript was generated by a third-party transcription software company, so please excuse any typos.
Not that long ago, Donald Trump swore up and down that he was the least racist person in the history of racism ever. And then this week we find out that his department of Education under the guidance of Secretary of education, Betsy Devoss, sent a letter to UNC and Duke, uh, basically saying that their joint, Middle East studies program was portraying Islam a little too positively and they didn’t like that. And so if they don’t stop portraying Islam in a positive light, they’re gonna cut their funding. You’re not going to get any more federal dollars for this program you’re running, which is funded by federal dollars. If you don’t stop saying how great Islam can be. Now, does that sound like the actions of an administration being run by a guy who is in fact the least racist person ever? Or does it sound like just the latest in a long line of bigoted policies coming from a bigoted president? I’m going to go with the latter because that is exactly what’s happening here. This is what the Department of Education had to say in the letter that they sent to Duke, UNC Consortium for Middle East Studies. Uh, the program places a considerable emphasis on the understand on understanding the positive aspects of Islam. While there is an absolute absence of any similar focus on the positive aspects of Christianity, Judaism, or any other religion or belief system in the Middle East, it’s right there in black and white in the actual complaint that they sent the universities who run this program together. You’re being too positive about these folks. You’re not being positive about these other folks. And we’ve got a real problem with that, which ironically is technically Contradictory to the actual complaint the Department of Education sent because the Department of Education earlier in their complaint says that, hey, we’re giving you this money for foreign language studies. That’s what you’re supposed to be teaching the students. But instead you’re talking about just religion, not foreign language, and that’s why we’re revoking your thing. But then later on they’re like, yeah, you’re just being too positive about Islam and you’re not saying enough good things about Christians. So they contradict themselves in their own complaint, which likely means it’s not going to hold up in court whatsoever, but then they went on to say like it is patently false. This was in a statement after this became public. It is patently false that the department is reviewing the probe program as being too positive on Islam. You literally said it. It’s in here. I just, I just read it. I just read it directly from your complaint and then you come out yesterday say we didn’t say that folks, it’s in black and white. It is publicly available. We can all go read it. Just like just did out loud to the public and the Department of Education is that they’re saying we never said that goofballs. No, it’s the earlier thing in the complaint that we later contradict ourselves on. That’s likely going to screw us in court because we’re all a bunch of morons because that’s what’s happening in the Department of Education. The people in charge of education policy here in the United States are clearly the dumbest human beings in this country today because they don’t even know how to properly file a complaint to hide their bigotry, and that’s probably going to cost them dearly.