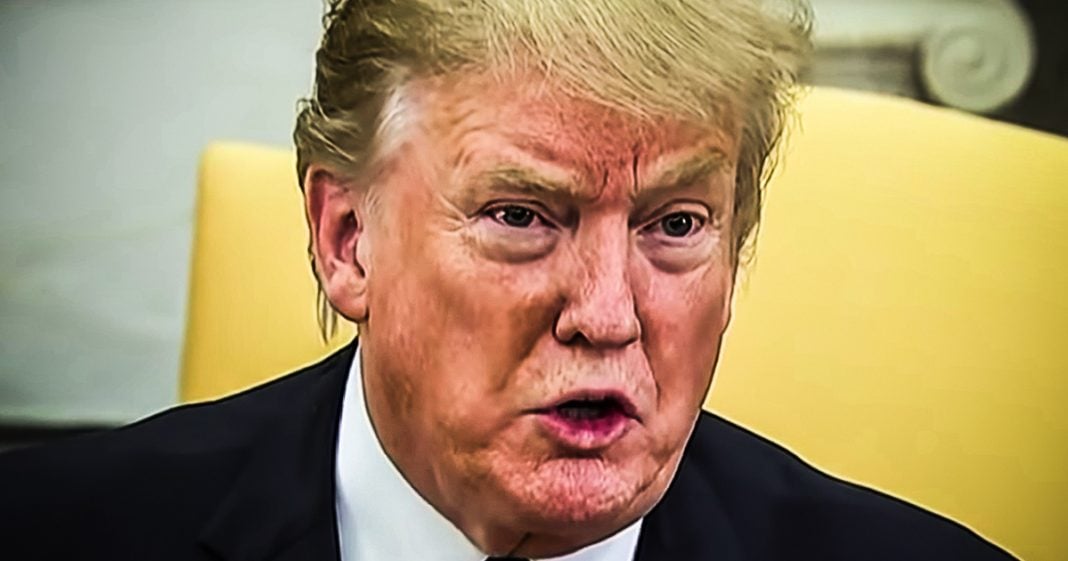 The Trump administration is doing everything possible to keep a whistleblower complaint from a member of the intelligence community from being seen by Congress and the public. While details about the complaint remain sketchy, it allegedly involves the President making a promise to a foreign leader that caused the whistleblower to fear the President was acting illegally. Ring of Fire’s Farron Cousins talks about what we know and what we don’t know about this case.

*This transcript was generated by a third-party transcription software company, so please excuse any typos.
So one of the biggest news stories of this whole week has been the intelligence community whistleblower who reported to the inspector general of the intelligence community that he overheard something from Donald Trump that was alarming and potentially illegal. Well, House Democrats have actually been investigating this phone call that this a intelligence community whistleblower had overheard. They’ve been investigating that sense before they even knew a whistleblower complaint had been made. And so last Friday Adam Schiff in the house said, hey, we want this whistleblower complaint. That is technically the legal process for it. When these complaints are made, they get sent over here to our committee for us to review them and not surprisingly at all, the Trump White House said, no, we’re going to exert executive privilege over this because we don’t want you to know what kind of credible complaint this whistleblower filed against the president of the United States. Honestly, I think people are kind of glossing over that fact. Yes, the whistle blower had a complaint and yes, the intelligence community deemed it credible and most importantly it was in actual complaint against the president of the United States. Not a group of several people in the White House, not a department, not an agency. The president him self is the subject of this whistle blower complaint. So for the last seven days, obviously news reports had been swirling about this. We have avoided talking about it here on ring of fire thus far because up till basically last night lot of the information was just pure speculation and to be honest, most of it today still is. But the picture is starting to take shape. Things are starting to get a little bit clearer. So here is what is kind of known and I hate to say that because yes folks, most of this is still speculation, but here is what is being reported. The phone call that the whistle blower overheard where Trump made a promise to a foreign leader was allegedly according to reports and the timeframe of it, uh, prime minister Ukraine during the same time period though it is important to point out that the president also spoke on the phone with Vladimir Putin and uh, an emirate from Qatar. And while I’m sure everybody wants to jump on the Putin bandwagon, which is what everybody thought before the Ukraine thing emerged. If it’s not Ukraine, my money is going to be on Qatar. Why? Because so is Trump’s money. And I think that would probably be more likely about a promise from the president. But nonetheless, the signs now are pointing to the Ukraine and it is likely that the president was talking to a Ukraine, telling the leader, you’ve got to say, Joe Biden did something illegal. If you want us to give you military aid, I promise to give you lots of aid and help you out in any way possible. If you take down Joe Biden, that is the prevailing theory at the moment. And for those who are not familiar with the Joe Biden, Hunter Biden Ukraine story, I’m going to give it to you in a nutshell. When Joe Biden was serving as vice president of the United States, Hunter Biden, Joe’s son, uh, became a director, uh, was basically put on the board of a Ukrainian, a gas company. You Ukrainian Electric Utility. Really Barista was the, the company Ukrainian gas company. So he was put on the board there and roughly around the same time, Joe Biden, along with Barack Obama and an ambassador to the Ukraine, the director of the International Monetary Fund, members of the UN and leaders of other countries were pressuring the Ukraine to fire their top prosecutor because the person was corrupt as hell. Now, conservatives and conspiracy theorists believe that Joe Biden was the only one pushing for this prosecutor to be fired, even though it was an international community saying, this person’s corrupt, get them out of office, and they think that he did this in order to protect Hunter Biden’s somehow because they think Hunter Biden had done some illegal stuff with Ukraine, some financial fraud or whatever, and they wanted to fire the prosecutor to, you know, stop any investigation. That’s what conservatives believe politifact is, run this. That’s not how it happened. It happened the way I explained it to you. There was international community outcry to fire this prosecutor. Was it a huge conflict of interest for ah Hunter Biden to be serving on the board of the Ukraine while Joe Biden also had an influence in Ukrainian policy from the United States? How yet was, did anything illegal happen? Not that anything is suggested, but if Republicans want to launch an investigation, sure, go right ahead. Why not? You know, let’s clear some names. If we can clear some names or if people did something illegal, let’s prosecute them. That’s how the law works and I am 100% in favor of it. But nonetheless, if the president of the United States is in fact threatening to withhold aid or promising to give more aid, if the Ukraine comes out and says, the Joe Biden did something illegal, then guess what, buddy? You’re not going to finish your first term. That’s where we’re at right now. And that whistleblower is the one who knows what’s happening. And that’s why the Trump administration is doing their best to keep this information secret. But I can promise you it’s not going to stay secret forever.