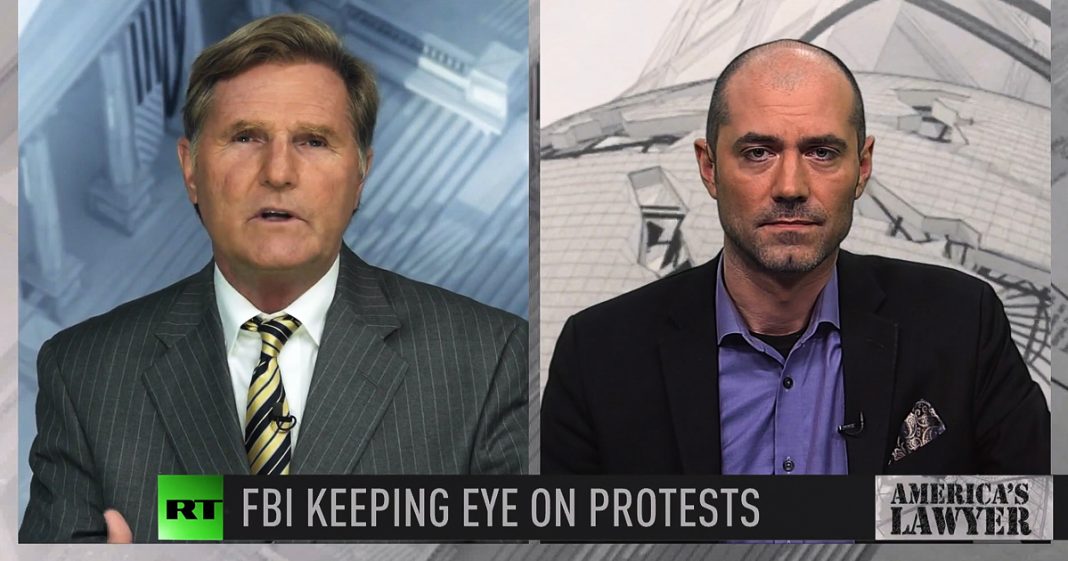 Via America’s Lawyer: Host of RT’s “Watching the Hawks” Tyrel Ventura joins Mike Papantonio to discuss an FBI report that indicates immigration activists are being monitored as potential “violent extremists.” With the lack in evidence of physical altercations or ties to anarchist groups, what’s the deal with flagging these people protesting migrant detention?

Mike Papantonio:             There’s been a flurry of protest nationwide against the continued detention of migrants and their families who are being crammed into squalid facilities that lack basic necessities and they’ve become a breeding ground for disease, especially among children. But documents show that the FBI is closely monitoring people who protest, they call them violent extremists. Host of RTs Watching The Hawks, Tyrel Ventura, joins me now to talk about this. Tyrel, first off, where is the FBI getting this information about protesters? How are they concluding that protesters are, are this, this, this, these violent anarchists?

Tyrel Ventura:                     Mike, It’s hilarious when you really break it down. When you look at this, this, this memo that came, you know, this report that came out of the Phoenix office. Because ultimately, ultimately when you strip all of the fancy language away and all the fancy law enforcement language away, it’s, well, we think we’re getting this from social media. We’re kinda getting this from social media and ultimately anything that’s really extremist that we’re referring to or violent that we’re referring to, well, it’s really just, you know, hearsay conjecture on our part. A little, you know, speculation, things that you wouldn’t allow into the court of law that would be struck down.

You’re an attorney, you’d know this, like you can’t allow hearsay conjecture and things like that in the court of law, but yet they’re putting it all into this document just to justify, you know, being able to paint these protesters at these detention centers and where there’s, where these immigrant, you know, where these immigrants are being held as, as somehow they could be violent, they might be violent. Maybe, maybe, maybe, maybe, maybe. But we can’t, we don’t really have any proof. We don’t have any actual hard proof that this is actually happening, that these people are a threat.

Mike Papantonio:             Well, we’ve seen this, we saw the same thing happen with Greenpeace. We’ve seen, we’ve even seen it happen with PETA, for God’s sake. Sierra Club, you name it, anybody that runs contrary to the norms of what they determine the norms. I’m always interested in the FBI norms. I think back how absurd it was that we had J. Edgar Hoover running the FBI. This is a guy who lived with his mommy his entire adult life. Dressed up like Carmen Miranda and Shirley Temple at night. And this was the guy who’s making decisions about what’s acceptable and what’s not acceptable in the United States.

As you found out in the Church hearings went after people like Mohammad Ali, went after Martin Luther King, went after Seymour Hersh. Went after all of these folks that we’re just a little different in his eyes. I guess as he was dancing around dressed up like Carmen Miranda, he thought, these people are too different from me, so he would target them. That’s kind of how I see this, how I see this report. You know, the report appears to, to link immigration activist movement to what they’re saying is going to be some type of forceful overthrow of the government. What’s the connection? What kind of connections are they making here?

Tyrel Ventura:                     Well, they’re, they’re trying to, they’re trying to connect the groups to, you know, other groups that have been in the headlines like Antifa and things like that. And they’re trying to say, oh well, you know, Antifa on their website talked about training their members with the use of firearms. So, so, you know, let’s try to, you know, make this huge leap that somehow that’s going to be happening at these protests at the border and at these centers when really at the end of the day, again, there’s no evidence to support what they’re saying. You know, there’s no evidence that any shootings have ever been linked to Antifa and, and, and you know, you look, you can have your opinions about Antifa whether you agree with how they protest, whether you not agree with how they protest.

That’s the great thing about the first amendment. But again, there, there hasn’t been any links to shootings or anybody armed running around by the detention centers or these immigration centers. There’s nothing whatsoever. It’s pure speculation on the FBI’s part and that’s what’s so dangerous. That this goes out to field offices all over the country and then everyone kind of, it creates that, that idea that these people are, we have to be scared of them. We have to be fearful of them. Why do you think we have so many cops shootings in this country? Because police and law enforcement are trained to be scared of the populace. So, immediately they go for the gun.

Mike Papantonio:             Yeah, the best description, I mean, like it or not, this is the description that, that stays with me about Antifa is like they’re a bunch of bored, 20 something year olds that like to dress up in black and put masks on and when college is out, that gives them something to do. Throw a few rocks. I don’t know. Make some, you know, make a bunch of angry speeches, go after the proud boys up in, up in Oregon. So I hardly see them as a threat to democracy.

Mike Papantonio:             Several states, in recent months have actually criminalized protests against the construction of oil and gas pipelines. Is there a likelihood that people demonstrating against migrant detention can be targeted as criminals? I mean, called this activity qualifies you as criminal. It allows us to make an arrest. There’s probable cause because of the way the statutes are written, we’re going to go after you. What, how, how do you see this developing?

Tyrel Ventura:                     You know, when you look at it, that has been one of the go to things, sadly since 9/11. And even, and as you mentioned earlier, J. Edgar Hoover’s days, they’re trying to criminalize protests. They’re trying to criminalize the first amendment. So, you know, could it reach that point? It could if, you know, the Democrats and congress allow it to. If the people in Congress that say they’re fighting for the rights of these migrants who are being held down there, it’d be up to them and Congress to say, no, we’re not going to pass laws saying that the people protesting these areas, you know, these camps, are, you know, a criminal or in their behavior for protesting. But will they have the spine to do it? I don’t think so.

When you saw them pass these laws against the pipeline protesters, it breaks your heart because you realize they’re passing laws against our right of free speech. They’re passing laws against our right to protest and we’ve done it before. Could they do it again for these people down there? Tragically, yes. They very well could. I want to add one extra thing to remember. This is from the Phoenix field office in Arizona that this, this report came out of. This is the same Phoenix field office that said that anyone who thinks of conspiracy theories, they could be deemed dangerous to the United States of America. That’s the same office.

Mike Papantonio:             God, God forbid. You know, I got about 30 seconds. I wanna, I wanna I, I come back to the Church hearings. The Church hearings were extremely important. They, they, they found out that that little free Truman had created the most vast spy system in the country, in the world at that time, spying on Americans that, you know, it was Shamrock, Project Shamrock. You outta take a look at that. It’s, it was incredible what Truman pulled off under this, under the suspicion, under this fear that somebody is going to do something wrong. And Truman created the most vast spying network to ever center in, in this country. And we thought it was over with.

We thought it was all over until 9/11 and then it started rebuilding. Now this is just a continuation of that type of spy infrastructure that we all know is there and nobody will talk about it, but it is there and, you know, maybe, maybe we shouldn’t worry about it. Maybe there are plenty of Americans who say, this just isn’t a big enough problem for me to worry about. Tyrel thank you for joining me. Watching The Hawks, that’s where that info, the types of stories we’re talking about now. You talk about every night and I’m glad you do. Thanks for joining me.