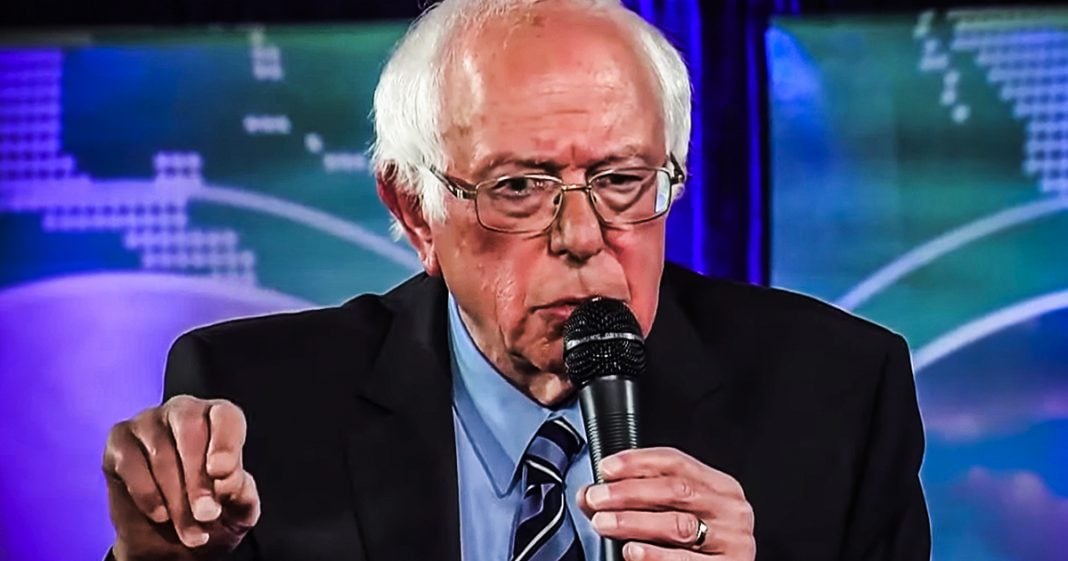 Bernie Sanders is serious about tackling climate change, including holding those responsible for the most emissions criminally liable for their actions. This is a tremendous step forward, and a completely necessary one if we want to get to the root of the climate change problem. Ring of Fire’s Farron Cousins explains how these prosecutions could work.

*This transcript was generated by a third-party transcription software company, so please excuse any typos.
It’s no secret that Senator Bernie Sanders has the absolute most ambitious climate change policy out of any of the people running for president on the democratic side. But during an MSNBC town hall on Thursday, Bernie went even further than his already ambitious plan when asked by a member of the crowd if we would prosecute any fossil fuel executives for their role and not just destroying the planet, but the coverup. Bernie said, Oh hell yeah. Bernie Sanders, if elected president wants to prosecute fossil fuel company executives for their role in climate change and their role in covering it up. And that to me is the most ambitious and best climate policy I think I have ever seen when taken all comprehensively. Because listen, we can do the other parts of the, the plan that Bernie Sanders has laid out. We can reduce emissions, we can get on renewable energy, we can update our energy infrastructure, we can create all these new jobs and that’s wonderful. But the people who cause this problem and the people who lied to us about it for decades, as Bernie points out, will you do just let them walk free? No, no. They lied to us and when any other company in this country lies to us about the product they’re putting out, whether it’s a pharmaceutical, whether it’s a chemical, whatever it is, you know, whether it’s a defective car, when they lie about it to the public, they get prosecuted. They used to get prosecuted. We typically don’t actually prosecute the CEO’s anymore. We slap them with some fines. They pay billions in the civil suits, but it’s a stern warning. Don’t ever do this again, and unfortunately they most likely always do it again. And that’s because we’re not throwing people in jail and Barney wants to change that, and Bernie is 100% correct. You want to get to the root cause of climate change, then you got to go after the people who’ve been covering it up again for decades. Their own scientists had been warning them. Some document show that their scientists were concerned about this in the late forties and early fifties from Exxon mobile folks. That’s how far back their own scientists said, wait a minute, I think this is screwing up the atmosphere. This was before the terms climate change or global warming even existed, but it’s in their internal documents and we know that and those are publicly available for anyone who wants to go see them and I suggest everyone does. But then we knew for certain in the 70s that they knew, they said, Yep, we’re doing this, this is bad for us. Where do we go from here? And where they went from there was the coverup spending millions upon millions of dollars every single year funding these astroturf groups pay off scientists to lie about the effects of climate change. And that’s what Bernie wants to get them on. It’s not just, hey, you destroyed the environment. We’re going to sue the pants off you and then throw your CEO in jail. No. In many cases the cover up is worse than the crime. And that’s what’s happening here because if they had come forward in the 70s and said, hey listen, we know the world is dependent upon our products, we get that, you know, makes us a lot of money. But we also got to warn you, we just found out this is kind of destroying the planet. So how about we all work together and find a way to stop it? Couldn’t done it in the 70s could have started it in the 70s at least. And the oil companies would have been the heroes of this story and said, oh my God, what have we done? Uh, we got to fix this. We’re going to take charge. We’re going to come up with new products. We’re going to start investing in something we’re calling solar power and wind power. How crazy would that have been, right? Exxon mobile, the leader in clean American energy in 1970 Could have happened, but it didn’t. Because that would have required a little bit more work. No, an investment on behalf of the company. And instead they thought it was easier to just spend that money instead of investing in renewables at the time on covering up what they and their scientists had uncovered. And that was that they’re destroying the planet. Bernie wants to throw him in jail for this. And I couldn’t agree with him more.