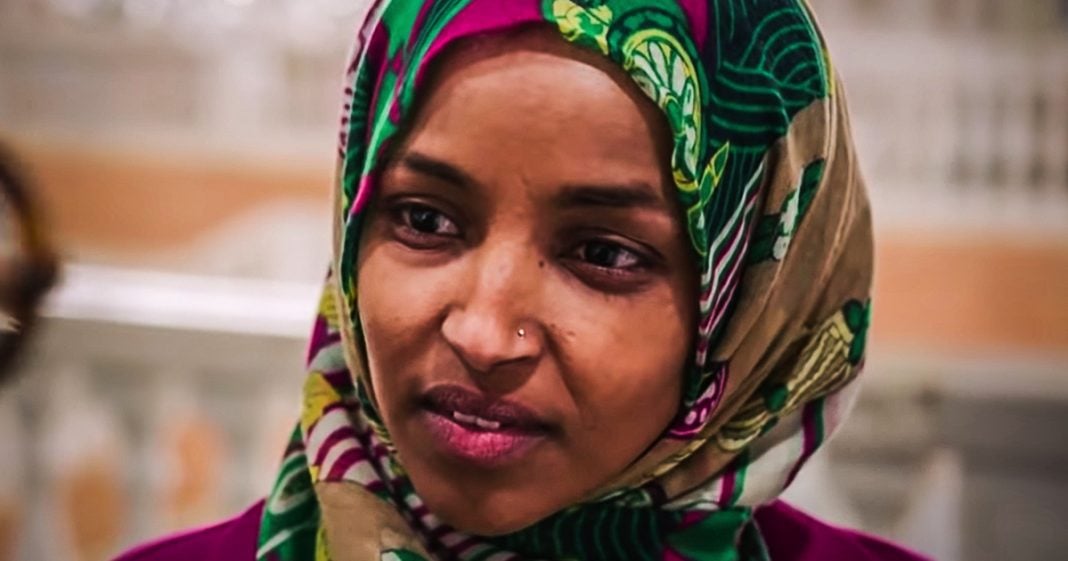 Donald Trump retweeted a vicious smear started by failed comedian Terrence K. Williams that claimed that Rep. Ilhan Omar was partying on the anniversary of 9/11. A quick scroll through Omar’s Twitter feed showed that Williams was lying about the event, but that didn’t stop the President from baselessly attacking Omar. Ring of Fire’s Farron Cousins discusses this.

*This transcript was generated by a third-party transcription software company, so please excuse any typos.
On Wednesday morning, Donald Trump retweeted a tweet and video from failed right-wing. Comedian Terrance k Williams were Williams, claimed that the video he was showing was of representative Allana Omar partying on 9/11 on the anniversary of 9/11 representative Allana Omar was out there dancing, having a great time, forgetting that it was supposed to be a solemn day, or at least according to Terrance k Williams, who again was then retweeted by the president of the United States who added this Allana Omar, a member of AOC plus three will win us the great state of Minnesota, the new face of the Democratic Party. And to be honest, I would love it if Allana Omar was the new face of the Democratic Party. She’s tough, she’s smart, she’s a fighter. She’s everything that we need representing us in the Democratic Party. But nonetheless, the video was an absolute lie and all it took was a very quick scroll through Alano Mars’ Twitter feed to find that out. The video was actually from September 13th where she was at this little gathering two days after 9/11 she posted the video herself on there because there was nothing wrong with it, but Terrance k Williams being the grifter that he is being the liar that he is, decided to steal the video, create this little fake story about it being on 9/11 hoping that no one would notice because he thinks everyone else is as stupid as he is, but they weren’t and so Williams, even after Trump retweeted, it was forced to delete the original tweet. Donald Trump being the idiot he is has not deleted his retweet of it, although you can no longer see the original tweet. He was re tweeting, but nonetheless it was a vicious lie meant to smear representative Omar. Now in case you’re not familiar with Mr. Williams, he repeatedly, routinely and obsessively tweets about representative Allana Omar and the other members of the squad calling for them to be impeached saying they hate America is followers. Then say yes, get them outta here. Send them back to where they came from, throw them in jail, whatever it is. Because these people are psychopaths. They’re absolutely mentally ill, dangerous individuals who have now fallen behind their cult leader, Terrance k Williams, who of course takes orders from his cult leader, Donald J. Trump. And that’s what’s happening. That’s how the right wing grift works. And Terrance k Williams is actually a doing pretty decent with it, I guess. I mean, he’s certainly not a household name by any stretch of the imagination, but he does have a lot of Twitter followers. And if that was actually marketable, then yeah, I guess you could consider him a success. Unfortunately, in the real world, that actually doesn’t mean really anything at all. So Kudos to you, Terrance k Williams. You’ve been exposed as a fraud. Those of us who aren’t a member of your cult, understand that you are just another right wing grifter trying to hit your wagon onto Donald Trump, only to realize that this man ain’t going to be around forever. So then what are you gonna do? What’s gonna be your stick? Then? How are you just gonna latch onto whatever conservative politician of the day is willing to drag you along for the ride? You’re a one trick pony at this point, and your one trick is being a Donald Trump fan boy. And when he’s gone, I shutter to think what that’s going to do to your 600,000 plus Twitter followers. I mean, how many fewer people are going to show up to your little comedy shows that you do? Wow. So I guess, yeah, milk it while you can, because that gravy train’s pulling into the station pretty soon and you’re going to have to d-board.