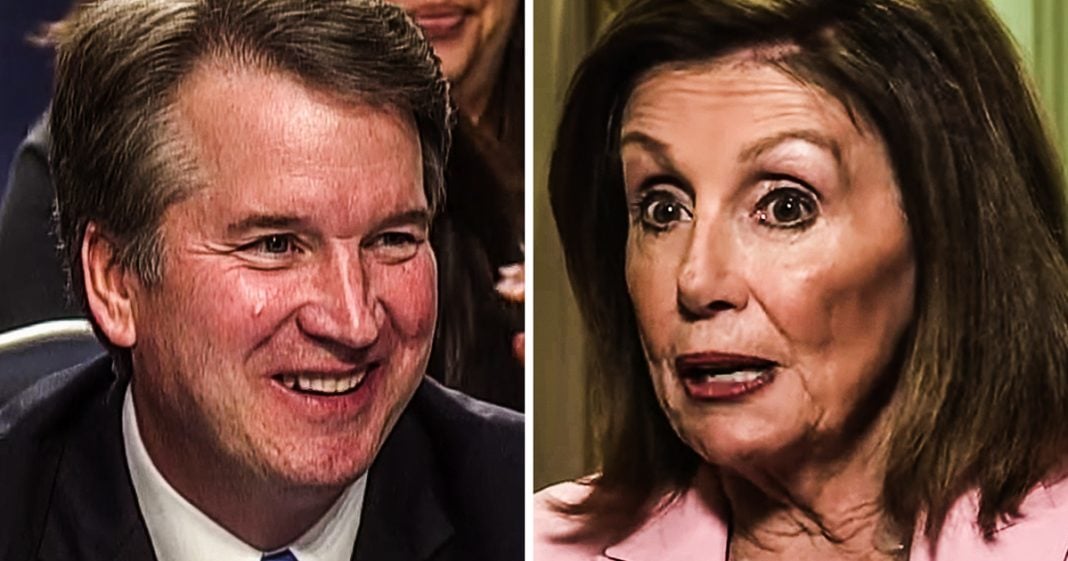 Nancy Pelosi represents everything that is wrong with the Democratic Party: Stale leadership that is unwilling to take on the necessary fights to protect this country. Pelosi told reporters on Wednesday that Democrats in the House will not be spending anymore time on Brett Kavanaugh, and impeachment is certainly not an option for them. Ring of Fire’s Farron Cousins explains why this is absolutely the worst thing Pelosi could do right now.

*This transcript was generated by a third-party transcription software company, so please excuse any typos.
Yesterday. Nancy Pelosi made it absolutely crystal clear that the impeachment of Supreme Court Justice Brett Kavanaugh, was not going to be happening. And Nancy Pelosi yesterday proved once again why she is too pathetically weak to be the leader of the Democrats in the House of Representatives. And I’m not even sorry to have to say that we, we’ve been saying it for a while and other people have been saying it even longer than that, but it’s becoming painfully obvious that Nancy Pelosi does not have the courage to lead the Democrats down the paths that they need to be going. Now, part of her reasoning is that, oh, well, we have very limited investigatory powers. And so, you know, we, we can’t, we got other things going on or we just don’t have time for this. Uh, first of all, bull, you can, you can hire outside lawyers to work on these issues. Uh, you could maybe put aside issues that aren’t quite as important as a supreme court justice on a nine court panel. I would think that might take precedence, right? I mean that Supreme Court seat, well, maybe not technically that one, but Democrats are kind of owed a supreme court seat right after what Mitch McConnell did to uh, Barack Obama. And here’s the thing, it’s not even about political payback. It’s not about, oh, we’re going to get you because you got us. No, it’s about the fact that Judge Brett Kavanaugh lied repeatedly under oath and has been lying under oath to Congress since the year 2004. Maybe that’s what we ought to hold them accountable for. Nancy. Maybe that’s the kind of thing that we need to take seriously as a country instead of just saying, I screw it. I mean, he’s only going to be on that court for another 30 years. Right? I mean, oh, we’ll have the last laugh when he finally retires. No, that’s not how this works. But that’s how you want it to work because you don’t want to make waves. Oh, you think that blue wave that came along in 2018 was all about people loving democrats? Nope. It was about hating Trump and people wanting change and not just change from Republicans, but change from people like you and it’s happening all over the country. Again, with real honest, fighting, progressive’s challenging establishment Democrats and I hope every single one of them wins. The only challenge that I’m not supporting right now is representative Kennedy, challenging Senator Markey. That is a foolish move by a man who is far to ambush ambitious and thinks that his last name is going to carry him into a long political career by unseating, one of the best senators we have in this country. That challenge, I don’t support, but all these other progressive’s out there challenging these establishment types, including your own challenger, Nancy, I wholeheartedly support them because it’s past time for you to go. You don’t seem to understand what the public actually wants, not just in terms of policy, but out of the actual Democratic Party itself. For years here on ring of fire, going all the way back to Obama’s very first year, we would do segments about how weak the Democrats were and we were hardcore supporting the Democrats. We were just mad that they were rolling over and showing their belly anytime. The Republicans who were in the minority of both houses at the time, anytime Republicans offered the least bit of resistance, tiny little bit of resistance and Democrats said, okay, we’re sorry, we’re so sorry. I know we have the majority and the presidency, but yeah, we’ll do whatever you want to do because God forbid we get into a bit of a fight. Oh, heaven forbid we show the public that we’re capable of fighting back against your bullying. Nancy Pelosi didn’t outgrow that. Nancy Pelosi is the embodiment of that and she’s the one we’re supposed to trust to lead the Democratic Party, to lead the House of Representatives. Absolutely not. That’s ridiculous and it’s insane to think that this woman, given how long she’s been there, is ever going to change. She won’t. This is who she is and this is why she must go. Nancy Pelosi is no good for the Democratic Party. She’s no good for the United States, and she certainly isn’t going to do the things necessary to hold this administration accountable for all of the crimes that are very well documented at this point, including the multiple instances of perjury committed by Brett Kavanaugh.