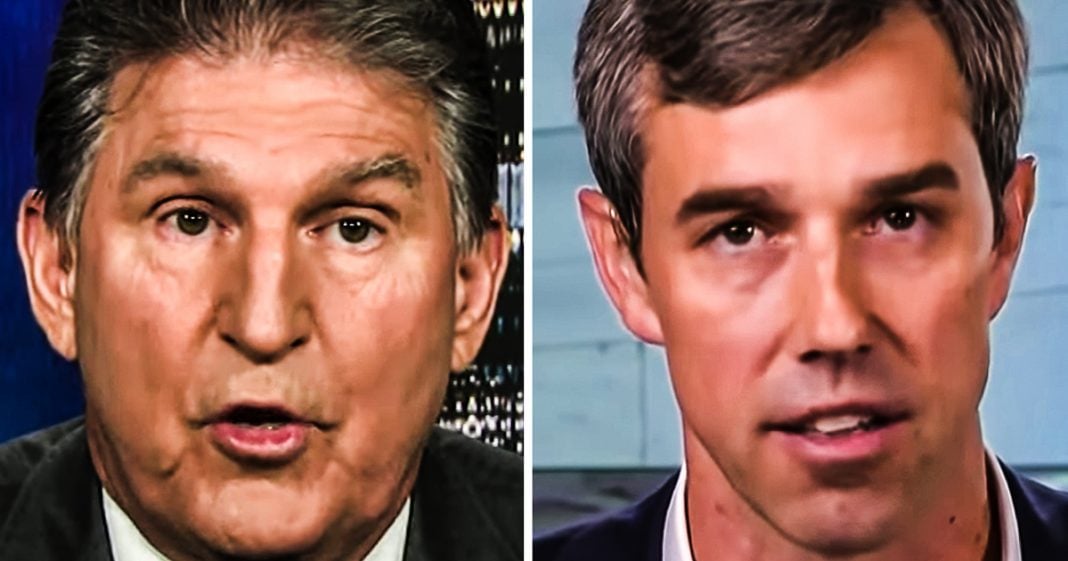 Democratic presidential candidate Beto O’Rourke said recently that he wants to take AR-15s and other weapons of war out of the hands of the public. Fake Democrat Joe Manchin from West Virginia didn’t like this, and he told reporters that Beto wasn’t going to take his weapons away. But Manchin doesn’t have any of those weapons, according to his own staff, so his claim was just pandering to his rabid base. Ring of Fire’s Farron Cousins discusses this.

*This transcript was generated by a third-party transcription software company, so please excuse any typos.
Well, establishment Democrats are still angry at Democratic presidential candidate. Beto O’Rourke for claiming that hell yes, we’re going to take your AR-15s and your AK 47s you know, basically return America back to the a years from 1994 to about 2005 or six I believe, when we had an assault weapons ban, when you couldn’t just go out and purchase those kinds of weapons. You know, we had a good solid decade. There were mass shootings were were rare, but Bush administration and the Republican controlled Congress said, you know what? We’re going to let that ban expire. We’re not going to renew it. So people go out and get your high powered assault weapons. Beto O’Rourke though his statement may have been a little too harsh for some establishment types is basically saying let’s go back to that. And one of those establishment types who felt that that co, uh, comment was a little too harsh is of course, none other than Joe Mansion. Joe Mansion, the Democrat in name only from the great state of West Virginia told reporters yesterday that Betos one human being, he gave his own opinion. Okay. I think it was a very harmful, I think it was very harmful to make it look like all the Democrats. I could tell you one thing, Beto works not taken my guns away from me. You tell Beto that. Okay. He literally did in that sentence with that Wall Street Journal reporter a with you tell Beto that okay, dude’s nuts. And what’s even more nuts about this entire story is that later Joe Mansion’s staffers came out and said, yeah, he doesn’t actually own any assault weapons. He doesn’t have AR-15s and AK 47s so we don’t even know what he’s referring to when he says Beto is not coming to take my guns. So even his own staff had to be like, yeah, sorry, Joe’s a little out there and Joe’s also lying to you. So why would Joe mansion lie about something like this? Because Joe, as I mentioned, is a Democrat in name only. The man is a hardcore conservative. Let’s be honest about that. Voted for Brett Kavanaugh and he’s just trying to pander to his West Virginia base. He thinks that’s going to play well. Being like, look at me. I own these weapons of war. Just like you average citizen who also has no business owning these weapons. Aren’t we just two peas in a pod? Shouldn’t you vote for me? I’m great and I’m not gonna ca, bow down to Beto O’Rourke. Hell Nah, Joe, you don’t own these things like this. Literally wouldn’t even affect any part of your life. Nothing changes for you. Beto or excuse me, Joe, if we suddenly ban assault weapons, again, nothing about your daily routine is different according to your staffers. Nothing about your office changes, nothing about your home changes everything. And Joe Manson’s life remains the same, yet he’s to make himself sound like some kind of avid gun collector who’s out there on the shooting range every other day, mowing down targets with his AR-15 and nothing could be further from the truth. Joe Mansion is a lying, pandering, grandstanding jackass and his own staff is the one who busted him on it.