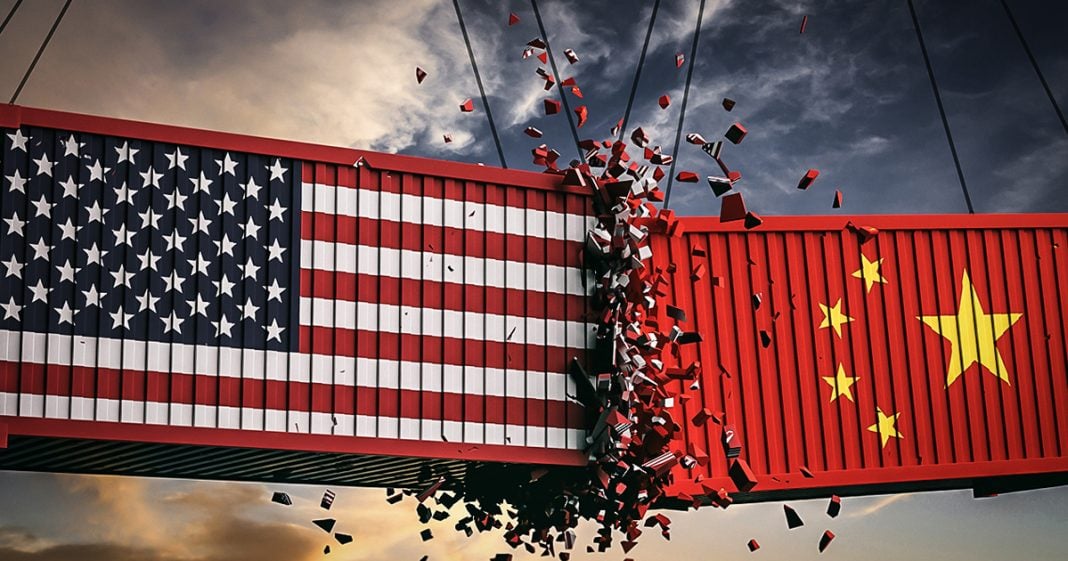 Some of the largest companies in the United States are joining forces to create a coalition with the goal of changing the way things work in the United States. But don’t worry, this one is actually a good idea. These companies want to prevent a maniacal president like Trump from being able to impose tariffs without Congressional approval, and give that power over to Congress for a vote. Ring of Fire’s Farron Cousins explains what’s happening.

*This transcript was generated by a third-party transcription software company, so please excuse any typos.
You know, it’s very rare for us to ever sit here on ring of fire and talk about a corporation or let alone multiple corporations stepping up and doing something good for the United States. But that is exactly what is happening right now. We have a new group that’s come out, the National Foreign Trade Council made up of mega corporations here in the United States. Ford is in there Facebook is in there. Many other conglomerates are in their billions of dollars in net worth and revenue between all these companies. And they have one simple goal with this new organization to take the power to tariff goods and services, mostly goods away from the president of the United States and restore that power to Congress. According to the US Constitution, Congress and Congress alone has the authority to regulate commerce. Tariffs would fall under that regulating commerce part. Congress also has the power of the purse. You have ability to do taxes, raise taxes, things like that. Um, that’s exactly what a tariff is. So these corporations have banded together to just say, listen, what the president’s doing right now is technically unconstitutional. Congress is the one that would have to approve these tariffs. Yet the president’s out here willy nilly getting on Twitter, suddenly saying, Hey, guess what? 10% tariff on these goods. Ha Ha, I’m such a great guy by, and these corporations are getting stung by it. They’re losing money off of it. They’re having to cut employees off it, but don’t feel bad. Right? I mean, they have the money. It’s the workers we need to feel bad for. And these corporations certainly don’t feel bad for the workers. They feel bad for themselves. So I guess we also have to admit to a degree that these corporations are doing the right thing, but for the wrong reasons. It’s not because they want to offer consumers goods at a lower price. It’s not because they want to make it easier on us or make it better for us. It’s not because they want to go back and hire all those workers and embrace them in a warm hug and say, we’re gonna give you better health insurance. We’re going to, we’re going to give you a raise. We’re gonna take care of you this time. No, they’re not going to do any of that. They just want to stop losing money because it’s hurting their bottom line. It’s hurting their CEO’s pay at the end of the year and that’s why they want this trade war to end and they want the power to be given to Congress. So again, they’re doing the right thing, but they’re doing it for the wrong reasons. So do we fault them for that or do we accept their help on this one issue? That’s the conundrum, right? It’s like all those people who said we should reach out to the hardcore crazy Trump supporters that think all liberals are fake news. No, that we shouldn’t reach out to those people. But at this point in terms of policy, in terms of taking powers away from the president that he wasn’t supposed to ever have to begin with, I think we accept the help and then if they are successful, we pressure them and pressure them and pressure them to take better care of their employees. And hopefully with a better president in 2021 we don’t have to worry about them providing things like adequate healthcare coverage or dental coverage and things like that because hopefully the next president will institute a Medicare for all plan where all of that’s already covered. And that’s one less thing corporations have to worry about. But until then we pressure cause it’s great that they’re doing the right thing right now. The question is will they continue to do the right thing in the future? And the answer to that is probably not, especially if we don’t pressure the hell out of them.