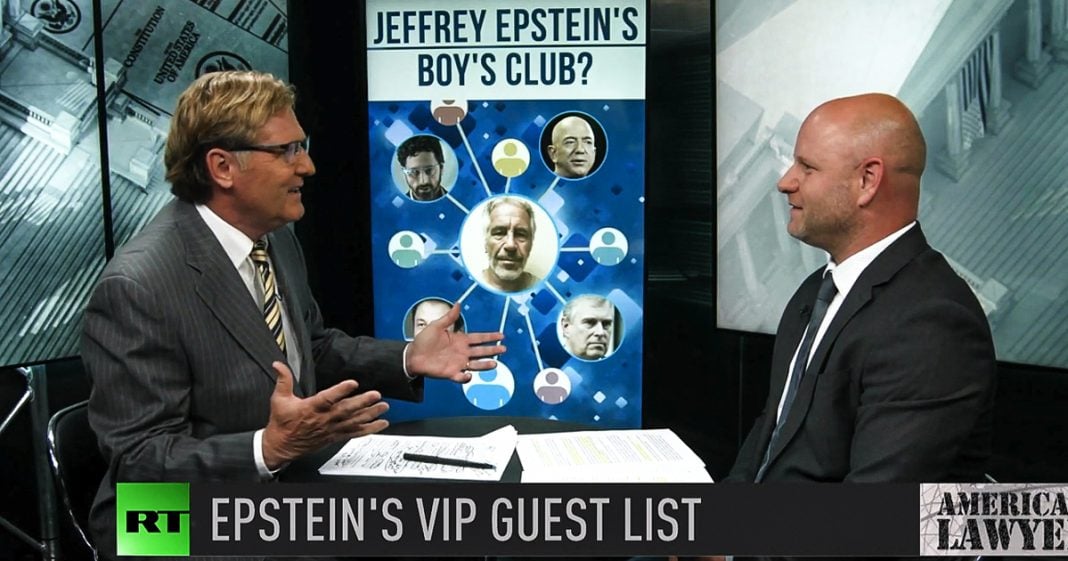 Via America’s Lawyer: Mike Papantonio and Trial Lawyer Magazine editor Farron Cousins re-visit the saga of Jeffrey Epstein, this time focusing on his connections to BIG names in the tech and education fields. Even after news of sexual abuse allegations flooded the media, Epstein continued to rub shoulders with figures like Amazon CEO Jeff Bezos and SpaceX CEO Elon Musk at elaborate “billionaires’ dinners” hosted by the Edge Foundation, all while funneling money to MIT scientists to keep the institution’s research community in his corner.

Mike Papantonio:             The elite in America may have heaved a sigh of relief when Jeffrey Epstein was found dead in his prison cell, but their connections to the convicted pedophile are still being exposed. Joining me to talk about, this is my friend and great, great writer, Farron Cousins, editor of the trial lawyer magazine. You know this story, the, the angle now. This is, this is a look back, isn’t it? The look back is how in the world did Jeffrey Epstein visit all his ugliness on the most elite parts of America in our culture. I mean, he, he, he rubbed elbows with all of them after they knew he was a pedophile. Take it, take it from there.

Farron Cousins:                  It is really interesting that these stories didn’t come out, you know, anytime within the last, what, eight years, I guess after the guy left prison because that’s when all this was happening. You know, as you mentioned earlier, he was hanging out in the same place as Elon Musk, Jeff Bezos. Was buddy buddy with Bill Gates getting him to give money to MIT. And at the time all of these people knew who Epstein was, what he had done. And they still thought, you know what though, I’m going to, I’m going to be here with him.

And what’s interesting is that you see all these publicists for some of these wealthy elite coming out now saying, well, yes, my, my boss was at this gathering where Epstein was, yes, he was pictured seated next to him, but I swear they never met. They never talked. It just, wrong place wrong time. Right?

Mike Papantonio:             Well, here’s, here’s, do you remember, you had probably took the same sociology courses I took in college. Do you remember the fact that even baboons, even groups of baboons will shun other baboons that violate the social norms within the baboon community, but not so with the social elite. As a matter of fact, they have this guy, John Brockman, the, Edge.

Mike Papantonio:             Talk about, this is an incredible element of this story. This character John Brockman and his organization Edge, they were paid big money to put Epstein shoulder to shoulder, elbow to elbow with this best scientists in the world. And this story gets crazy as you look at the MIT part of it.

Farron Cousins:                  Right, and, and what Edge did was Edge would put together these gatherings, they started off bigger, but then they got smaller as this group of elite became more elite. And yet Jeffrey Epstein still made that final cut into these little Edge gatherings. And that is where, you know, the Musks and the, and the Bezos would be hanging out too.

Mike Papantonio:             Well, for example, one gathering, I was really interested, this is, this is a great article, it was, it was actually done by Buzzfeed. And one of the groups where they had, they call it the billionaires dinner, right. And so, so Brockman who obviously has, he, he’ll work for anybody. Brockman two years, two years, two full years after he already knew that Epstein was a pedophile, a repetitive pedophile, a serial pedophile. Had served not enough time for it.

After he knew all the ugly parts of Epstein, he still set out to put him kind of what we call the TED Center. Right? Talk about the TED Center and how Brockman in his organization Edge could, I, I guess they could have done the same thing with John Wayne Gacy or maybe even son of Sam. I don’t know. This guy’s really good. What did he do here?

Farron Cousins:                  Well, this is where they would, you know, after the TED talks and when the TED conventions were happening where you had all these, you know, great, wonderful people speaking. They would have these gatherings after. They would have parties and dinners and, and Brockman would make sure that Epstein would go there. Sometimes not necessarily letting people know that Epstein would be attending. And that’s what kind of gave people the clearance to say, oh no, I didn’t know Epstein was going to be there.

And yet it’s pointed out in this Buzzfeed piece that these are people, you know, the so elite in here that they have their assistants who put together little portfolios of everyone who’s going to be attending these parties so that their boss can walk in there and not seem like they don’t know who these people are.

Mike Papantonio:             Well, and what he would do, what you would see Epstein doing and Brockman doing together is they would take those whatever contact Epstein had, like his Bill Clinton contact. Very, very strong Bill Clinton contact, no question about it. So he would take a contact like that and then he would bring in, say somebody like Larry Summers and he would say, Larry, we’re having, we’re having a get together. All the great minds are going to be there. Why don’t you come?

Farron Cousins:                  That one’s really interesting. Epstein was raising millions of dollars for MIT after the conviction and relatively short prison sentence, and MIT knew that this would be very bad publicity for them. So Ronan Farrow, who is phenomenal.

Farron Cousins:                  An absolutely great journalist, went through the emails of MIT and found where they would say, hey, Epstein’s giving us a lot of money. Keep his name off of it.

Mike Papantonio:             I love this quote. This is the quote from Rafael Reif who is the MIT president. With hindsight, we recognize with shame and with distress that we allowed MIT, MIT to contribute to the elevation of his reputation, which in turn serve to distract from his horrifying acts. No apology can undo that. Well, the truth is, the, the truth is this guy knew exactly what he was doing when he was accepting money from Epstein and, and, and Peter Cohen, also knew exactly what they were doing. Didn’t they?

Farron Cousins:                  So they all knew who he was and what he was doing. But then after that disqualification, they still worked with him. He still gave them millions and that’s when you get the statements. Trying to see if I can find it here. Oh yeah. For gift recording purposes, we will not be mentioning Jeffrey’s name as the impetus for this gift.