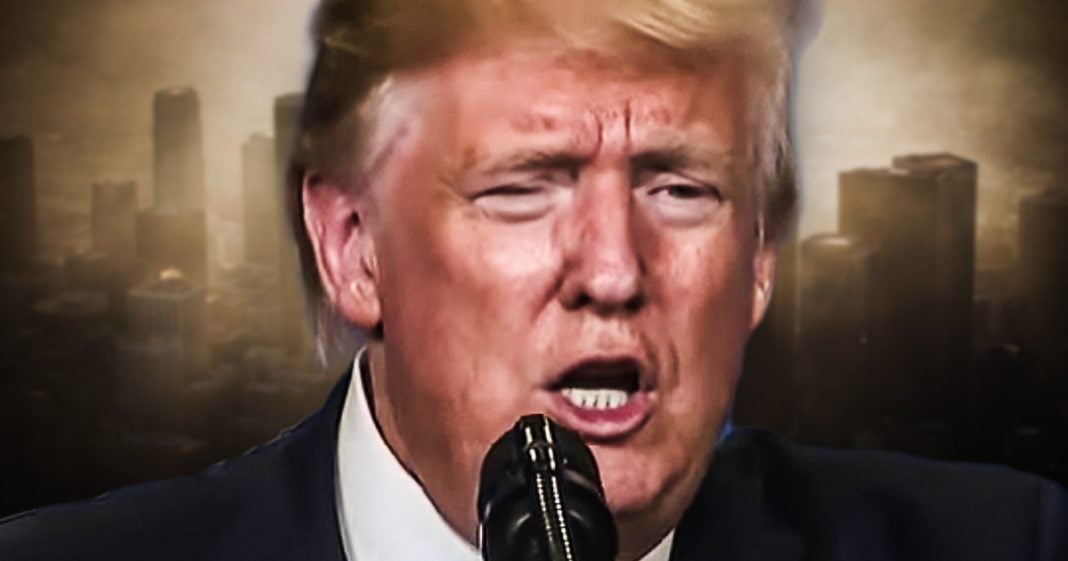 The state of California was not happy that Trump rolled back emissions standards for automobiles, so they took it upon themselves to enact stricter standards. Today, the Trump administration decided that this was a bad thing and they’ve announced that the EPA will be rolling back California’s standards, even though they apparently lack the authority to do so. Ring of Fire’s Farron Cousins discusses this.

*This transcript was generated by a third-party transcription software company, so please excuse any typos.
Well, the Trump administration may not be leading us into a war with Iran just yet. They are leading us into a war against clean air. And unfortunately that is a war where everybody loses. There is no winning side when you decide to take on big air. But that is exactly what the Trump administration is doing today. The EPA is officially announcing their a rollback of California’s auto emissions standards. Now they, the EPA has been working on their own set of national emission standards for quite some time now, well over a year. And they swear to God they’re pretty close to actually having it done and they’re gonna roll it out, let everybody know what it’s going to be. What we do know about it is that it’s going to lessen the regulations. Basically say that cars do not have to be as fuel efficient. They do not have to a emit fewer pollutants. We can go back to the old days of those big hummers all everywhere on the road, getting five miles per gallon and spewing out God knows how many, uh, pollutants and particulates. That’s what the Trump administration is taken us back to. And so California said, listen, we don’t want that in our state. Can we have a waiver saying we don’t have to adhere to your rules. We’re going to make stricter rules. And the EPA said, yeah, sure. Here, here’s your waiver. Go ahead, go do whatever. But Donald Trump, who seemingly hates the state of California and everybody living there decided this week that, nope, we’re going to take your waiver back. We’re resending the waiver and you will be forced to fall in line with these federal standards. Now all over social media, everybody’s saying like, oh, I guess Republican’s suddenly don’t care about states’ rights. That’s not quite what this is. Folks. States rights basically say anything, obviously not already covered anything. Not a governed by the federal government. That’s up to the state’s. Clean air is regulated by the federal government. The EPA, according to the US Supreme Court does have that authority and they have to do it. So this is going to set up a court battle that honestly, I don’t know that California can win. The Supreme Court many years ago during the Bush administration did say the EPA has to regulate pollution. They have to regulate emissions. So that is a power granted to the federal government. So California making their own rules as noble as it is, and as healthy as it is, they may not legally have the authority to do that. If the Trump administration does come out with new standards, obviously California does have a very strong argument saying, we want our standards to be stricter. We’re not going lower than the, uh, federal standards. We’re, we’re making them tighter. We’re saying you can’t even admit emit as much as, or the federal government says you can. So, so they’ve got a case, but unfortunately the Supreme Court technically has ruled on this particular issue. Now, if California does win this, this would set a precedent that would allow other states to do the same, not just with the air. This would go for the water. And depending on what kind of lawyers you hire and what kind of judges you go up against, it could extend to things like gun control. That’s where we could be headed with this. If California is successful, and I hope they’re successful, not just because the implications of this further down the road, but for the fact that this is disgusting what this administration is doing, they have increased emissions in this country for the first time in years, and now they’re trying to tell California a state that grapples with air pollution on a daily basis at levels higher than most of us even realize the telling them, nope, you can’t do better. You can’t be better. We want to keep your air dirty because the president of the United States has some kind of grudge against the entire state of California.