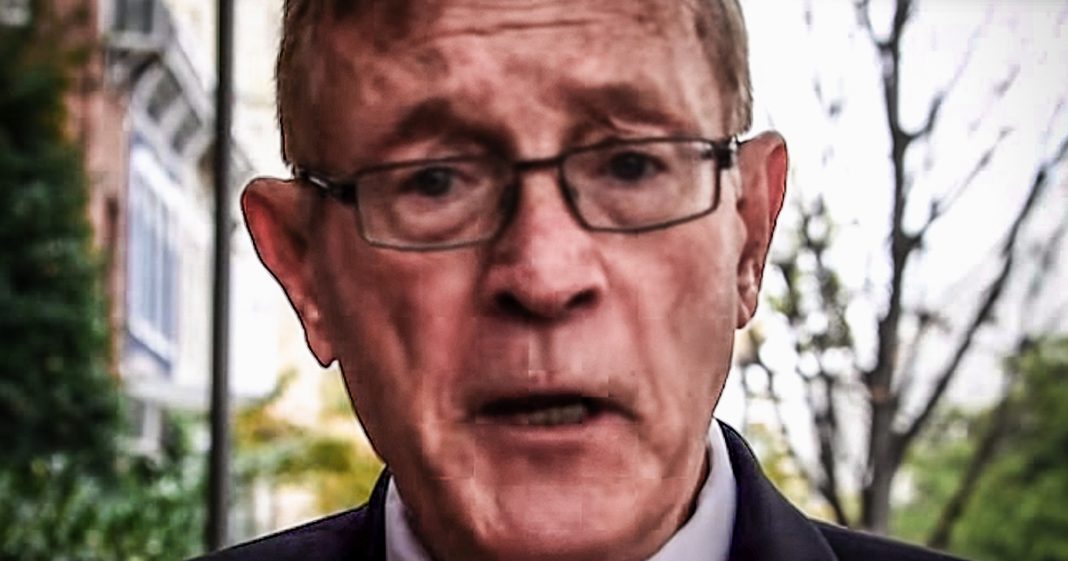 California Representative Paul Cook (R) announced that he would not be seeking reelection next year, making him the 17th Republican to announce an abrupt retirement before the 2020 cycle. As more and more Republican rats abandon the sinking GOP ship, it becomes far more likely that Democrats will increase their power in the House. Ring of Fire’s Farron Cousins explains what’s happening and what could be behind these retirements.

*This transcript was generated by a third-party transcription software company, so please excuse any typos.
Yesterday, California Republican Representative Paul Cook announced that he would be retiring and not seeking reelection in 2020. And everyone’s immediate reaction to this obviously was, who the hell is Paul Cook? I really, that wasn’t everybody’s reaction, but that was my first reaction is who is Paul Cook? Well, apparently he’s been in the US house of Representatives since 2012 so relatively short tenure. Uh, given the fact that these guys can run for office forever, he’s in a very safe district in the state of California. You know, no real controversies to his name, has never really made a name for himself whatsoever. But Paul Cook decided, can’t do it anymore. I’m going to go over here and run for a school board administrator in my county. Cause a, that seems a lot easier. Could it be Mr. Cook that you’re terrified of what Donald Trump has done to your party? Could you like the 16 other Republicans before you this year? Just be tired of it. All. Tired of the scrutiny that comes now with having an R behind your name, having to fall in line with a president who is increasingly unstable and yet you can’t say anything about it. You just have to grin and bear it. Do you think maybe that’s what it is, Mr. Cook? Because the rest of the country, 100% thinks that’s what it is. Again, Cook is now the 17th Republican so far this year to announce that, oh, guess what? I’m just going to retire. I’m done by these abrupt retirements. 17 of them so far. This is not a coincidence. These are not mostly people who have just been serving for so long and they’re old and, oh, I want to retire. I have no more political ambition. Nope, that’s not what’s happening. These are people in their prime, in their political lives. They could have a very long and successful future in front of them if it weren’t for Donald Trump. See as we and many others have been discussing pretty much since the first days of the Trump administration. This made us destroying the Republican party from the inside and not just with his horrible policies. Again, there is nothing that Trump has done in terms of policy that any other Republican in this country wouldn’t have also done. That’s where we’re at. There’s no difference in policy. What’s happening though is that this man is insane and Republicans like Paul Cook and the 16 others who have had to retire and everybody else who says, no, I’m a stick with it. They have to go out there and defend that. They have to go out there and answer questions on that and whether or not they agree with it is irrelevant because they can’t go against their own president because he’ll then start coming after them on Twitter with even more crazy attacks. So they have to either stay silent or defend him and that’s got to be tiring. I mean, not just for the politicians. Look at these right wing grifters out there. You know, look at people like Charlie Kirk and Candace Owens and Tomi Lahren. You guys got to come out every day and defend this goofy nonsense because your paycheck depends on you. Defending it properly. And if you don’t, you lose money. That’s gotta suck. What a horrible way to go through life. I mean, no wonder you guys always seem like you’re just miserable human beings walking around waiting for the world to just come to an end to get it all over with because you’re defending a madman and you know it. But unlike these Republican politicians, those right wing grifters can’t walk away because that’s their entire livelihood. They built their entire brand on defending a crazy person and in doing so only made themselves look crazy or in the process. But these Republicans in the house who are retiring in mass, they have an out, they don’t have to be a part of it anymore and they can go on with their lives and be happy and blah, blah blah. But here’s the thing, 17 republicans are retiring so far, opens the door for the Democratic Party to take an even bigger gain in the house of representative. They can have even larger numbers than they have right now in 2020 if they play their cards right. I wouldn’t put it past him to screw it up. But you now have at least 17 new non-incumbent districts that might suddenly be in play and pleased. Democrats play it smart run on policy, and you might just flip a few hard red districts.