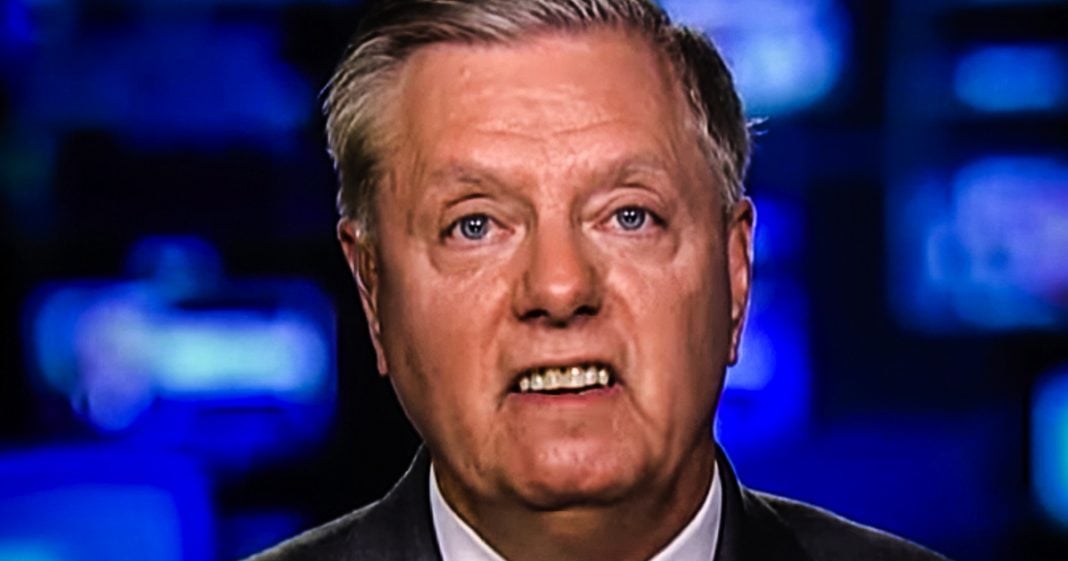 Lindsey Graham has been dying to go to war with Iran since the early days of the Iraq War, and he believed that the attack on Saudi Arabia’s oil facilities this past weekend would finally allow his wish to be granted. But when Trump didn’t immediately start a war, Graham begged him on Twitter to take “decisive action” against the country, which didn’t make Trump happy. Ring of Fire’s Farron Cousins discusses this.

*This transcript was generated by a third-party transcription software company, so please excuse any typos.
For pretty much most of my career, I have tried to avoid attacks like the kind of attack I’m about to unleash on Lindsay Graham here, but I’m going to have to say it because it’s becoming glaringly obvious. Lindsey Graham is clearly trying to compensate for something. Lindsey Graham was trying to overcompensate for something because this man has never met a country that he wouldn’t like to bomb. And yesterday on Twitter, he was essentially begging Donald Trump to please go start a war with Iran please, Mr. Trump. Lindsey Graham tweeted out the following, which was just part of a, a multithread tweet. Here it is. The measured response by President Donald Trump regarding the shooting down of an American drone was clearly seen by the Iranian regime as a sign of ones weakness. Okay. Trump immediately fired back not wanting to be, uh, you know, insulted by a guy like Lindsey Graham. And Trump said, no, Lindsey, it was a sign of strength that some people just don’t understand. So Lindsey Graham was unhappy a couple months ago. Obviously the drone got shot down by Iran. He’s not happy that a Saudi oil facilities were attacked this weekend, allegedly by Iran. And Lindsay Graham wants to go over there and you know, kill some folk. Well, Lindsey Graham doesn’t want to do that. Obviously he’s terrified of war, but he loves it from a far, you know, he likes to see that it’s happening way over there where he can’t be involved in any of it. Sending our brave men and women over there to die for Saudi Arabian Oil. Uh, that’s what Lindsey Graham wants. And Trump really did smack him down. Now, now this morning, Trump came out and said that, uh, they’ve announced new sanctions against Iran. He’s told secretary, uh, Mnuchin to go ahead and put those new sanctions in place. Let’s squeeze them economically. But that’s not good enough for a guy like Lindsey Graham. And again, it’s because clearly he’s trying to overcompensate for something. Maybe Lindsay Graham doesn’t feel like he’s enough of a man in his daily life and that the only way he can feel validated as a man is to start new wars. And again, I don’t particularly like going down these routes with attacks on people, but at this point, again, it is glaringly obvious. Lindsey Graham is trying to make up for some kind of shortcoming, whether real or imagined that he is experiencing. And that is why he has consistently over the years, been pushing for endless wars, been pushing for attacks, been pushing to make himself appear as if he is some kind of big tough man. Now, I don’t know what he is overcompensating for, and I’m certainly not going to speculate about any of that, but his history suggests that he is definitely compensating for something. And hopefully eventually we’re going to find out, maybe get him to speak to a good therapist and end his lust for endless war by finally acknowledging his own shortcomings.