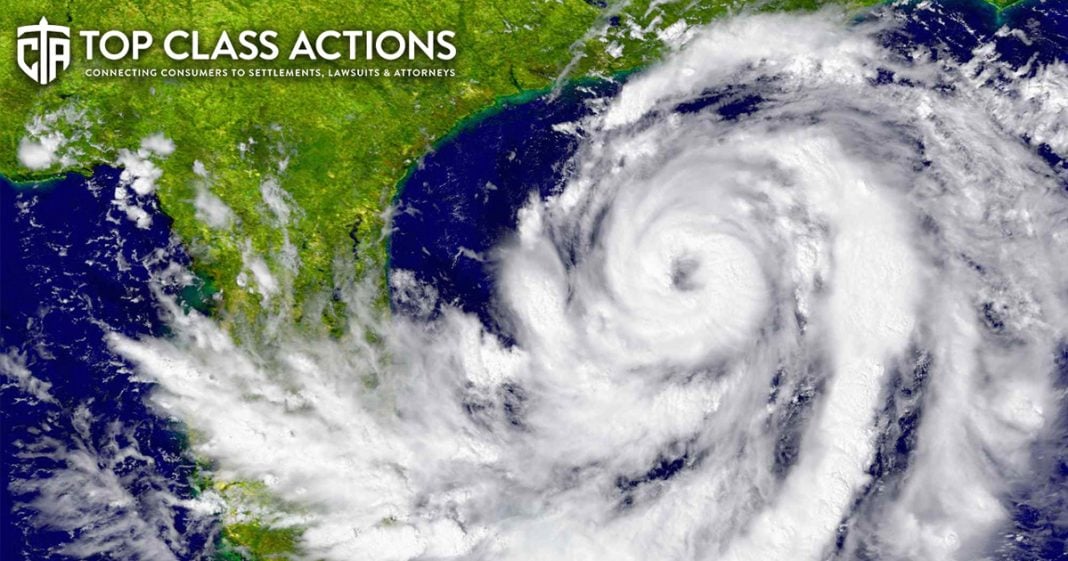 The victims of Hurricane Dorian want to get their lives back on track as quickly as possible, and that will mean navigating a confusingly complex web of insurance policies. Insurance companies can lose a lot of money on natural disasters, which is why they can be reluctant to make payments sometimes, and that’s when consumers need the most help. Ring of Fire’s Farron Cousins discusses this with Scott Hardy from Top Class Actions.

Farron Cousins:                  This is the time of year that insurers absolutely dread. It’s hurricane season for everyone who lives in a coastal community, pretty much anywhere on the Atlantic coast, the Gulf coast, and even on the Pacific coast. And anybody who’s ever been through one of those storms understands that dealing with the insurance companies after the storm hits can oftentimes be just as devastating as the storm itself. And so for the recent victims of Hurricane Dorian, we’ve got some advice for you right now and joining me to talk about this is Scott Hardy with Top Class Actions. Scott, this is a very important issue. It’s one that hopefully most people in this country never truly have to deal with.

You know, we, we all have homeowners insurance, but we hope we never ever have to use it. And when you go through a situation like this, a hurricane where you have, you know, hundreds of thousands if not more people who suddenly make a claim on the insurance, they try to do everything possible to not have to pay each and every one of those claims. So before we even get to that part, let’s talk about what the victims need to do. Like right now, the immediate future, what should these victims of the recent hurricane be doing in terms of their insurance claims?

You know, a good friend of mine, he’s still dealing with his insurance claims from just two years ago. And so it’s, it’s crazy how long these things can take. In his case, he actually got everything done and he made a key mistake. He got everything done before the insurance company agreed to pay it. And so they came back and literally they sent an insurance adjuster into his house and said, what are you talking about? Your tile looks brand new? And he said, yeah, that’s because it is brand new. I replaced it because it was under three feet of water. And he’s getting hassled about that.

Farron Cousins:                  Yeah. Well, you know, we here along the Gulf coast, where, where I am. Back in 2004, we had a massive hurricane come through. Hurricane Ivan, caused a ton of damage. That was the year before Katrina and that was something we dealt with in this area for years. And a lot of things we saw happen during that time with the insurance companies was they would come in and say, oh, your roof blew off. Yes, that, we’ll replace your roof.

But unfortunately because it rained inside your house, that’s a flood insurance issue. You know, we’re not responsible for any of that. So all of your belongings that got destroyed, that’s not covered under your policy. But then we actually had a lot of the flood insurance companies come in and say, yeah, but this wouldn’t have happened if your roof hadn’t blown off and that’s your homeowners insurance.

So they are responsible. I mean, there was a lot of fighting between the insurance companies that obviously impacted the consumers, which had to result in lots and lots of lawsuits. But people had to wait years before they ever got paid after this was resolved in the courts. So that is something people have to be aware of. I don’t necessarily know what they can do to avoid something like that because when you have the two different insurance groups bickering between one another over who is responsible, you know that, all that does is prolong the suffering of the victims here.

You know, I, I messed up on just a claim that I had at my house where we had a huge haboob one of those big dust storms blow through and that caused damage. I just got it repaired, but then we had some leaks and so then I said, oh well that was obviously caused by the haboob. I had just gotten the, the shingles repaired and the insurance company said, sorry Scott, you’re out of luck. Your roof is fine. Like, come on.

Now, thankfully, you know, that was $1,000 worth of damage instead of, or you know, actually talking about a whole lot more than that. But it’s not like what these folks that are dealing with hurricane damage are, are, are, are fighting with the insurance companies for, and that’s where you really do need to get a lawyer involved. If they’re denying your claims or like you said, if they’re fighting back and forth between whether it should be flood insurance or just your homeowners insurance should be covering it, you know, a lawyer can get in between that and untangle that mess and really make sure that you’re 100% covered.

You know, it’s important to note that a lot of homeowners insurance will pay you for if your business is affected by this hurricane. And so you might have a claim for your business due to the damages caused and due to the loss of business. So check all of those boxes along through your, your actual insurance policy to see what you’re covered for. Because you may be missing out on additional claims that if you don’t claim, then you just don’t get paid.

Farron Cousins:                  And, you know, one thing, obviously we’ve said this plenty of times in the past is people, you know, keep your receipts, you know, for major appliances, TVs, computers, whatever that is. Those are receipts you need to hang onto for the life of that product because those are going to be the big ticket items that are going to be hardest to replace. You know, a major furniture, couches are, are crazy expensive these days. Keep those because situations like this, even if you’re not in a, you know, hurricane zone, you know, fires, other floods, things like that can and do happen. And this is one of the reasons you keep those receipts.

And that’s something that stays around in your phone. You know, it’s saved in the cloud. You have that documentation of everything that you own and that could definitely save you when you have to deal with these insurance companies.

Scott Hardy:                          Exactly, video it, document it. When you’re getting the repairs done, make sure that you’re actually taking pictures of the progress because you don’t want an insurance company to come back and try to deny your claim for the quality of work. They might say, well, you know, we’re going to go ahead and reimburse you for the tile, but we’re not going to go ahead and pay, doesn’t look like you got, you bought fancy tiles, so we’re not going to pay you the full amount that you’re telling us about. Document everything, because if they come back and will try to fight you on it, you’re going to need those pictures just like you’re saying.

Farron Cousins:                  Absolutely, and so for anyone who experienced any kind of damage from this storm or any storm or any natural disaster, I advise you. Follow the link in the description of this video. Head on over to Top Class Actions, and while you’re there, sign up for their weekly newsletter. Scott Hardy with Top Class Actions. Thank you very much for talking with us today.